Cracking the Internet in Half, Inside Out, Upside Down & Sideways: Incredible Hulks #622, Reviewed

Have I been blogging entirely too much? It's crazy that I actually have to shuffle things around and prioritize what I want to talk about. I love talking comics, although certainly other non-comics things are on their way. (What, you think I put that new image at the top of the blog for my health?) The Hulk, however, remains my bread and butter, so now, without further ado, my review of an issue which has ignited the fires in many a Hulk fan's breast (and yes, the fact "fan" is really short for "fanatic" is something I'm especially aware of granted the responses I've seen). 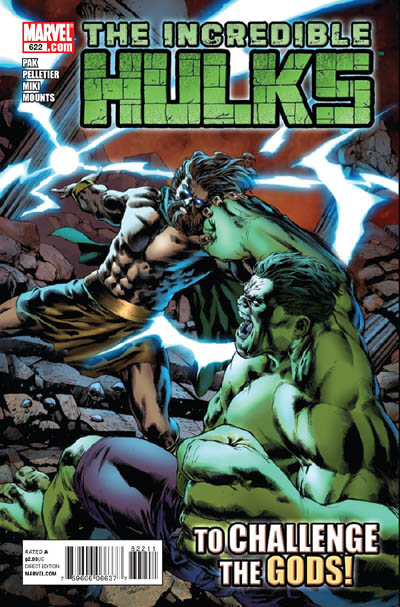 Well, here it is! The moment you've all been waiting for! In order to make perceived wrongs right, the Hulk takes the fight to the newly-reborn Greek Pantheon of gods. And because the Hulk is The Strongest One There Is, he won't be denied, and during a truly epic battle he pummels the Skyfather himself, Zeus, finally making him accede to his wishes. Zeus decides to see things the Hulk's way, returning Rick to human form and curing Betty of the insanity that afflicts her as Red She-Hulk. The only catch is he's cursed to be the Hulk forever. Bruce Banner exists no more.

I totally had you up to that heartbreaking idea of a cliffhanger, didn't I? Then again, if the story really did go anything like the above summary, Hulk fans wouldn't be in the middle of a Hulk-sized hissy fit, and Thor fans wouldn't be gloating like crazy while proclaiming their guy has better showings against higher gods. And yet, to this reader, the way the story went is pretty much the only way it could.

Writer Greg Pak took a lot of flak from much of the Marvel fanbase during World War Hulk, where many saw the Hulk and his Warbound companions' victories over various heroes as the result of "jobbing," which is to say Hulk & co. are made to look good at the expense of more skilled (which is to say, more popular) characters. Interviews, including those taken by this very blogger, indicate Pak certainly has a high opinion of the Hulk. He's loved the character for years and certainly knows his way around his history, with repeated references to Jarella and other oft-ignored bits of Hulkish trivia.

Pitting the Hulk against the Skyfather Zeus in this story, then, tests Pak's mettle as a true storyteller, as well as puts him between the proverbial rock and a hard place--at least, among fans who care about who's strongest and who can beat the excrement out of whom. If the Hulk beats Zeus, then, holy crap, the Hulk really must be the strongest one there is, and every other superhero out there can suck it. On the other hand, if the Hulk is beaten by Zeus, then there is just no justice in the world, and every Hulk fan assembled should scream bloody murder and call for the immediate replacement of Pak as Hulk writer, because that's not the way we roll.

Yeah, that was sarcasm. Could you tell?

The Hulk and Banner foolishly expect that Zeus would just grant them a boon, but Zeus has never been the most levelheaded of gods. He remembers their previous encounter (and say, is this book one of the only ones to use starred references to other issues anymore?) and decides to show the Hulk a lesson he won't soon forget. The battle that follows is brutal and bloody with a predestined end reminiscent of Peter David's Hulk: The End. Although engaging Zeus in battle, make no mistake: this Hulk would die if it meant happier times for his family. Unfortunately, the world doesn't work in such simplistic terms.

The story this outing works better than in the previous chapter in spite of the preordained outcome. Although many will argue the point, the Hulk just isn't in the same league as Zeus and shouldn't be treated as such. The Hulk's simplistic desires clash with Zeus' equally simplistic view of humanity, and both parties really come away as losers when the dust clears. Pak's script makes these developments clear, and to me at least, it's a relief that the winner wasn't the guy whose name is on the front of the book.

As strong as the ideas behind the story are sound, it's the art that is a small letdown this issue, and once again, just like in "Dark Son," I'm afraid I can only blame the stepped-up twice-a-month schedule of the book. Although Paul Pelletier's pencils are always a joy to see, and Danny Miki usually delivers some great inkwork, this issue's artwork seemed rushed in both line and color. Thankfully, the pages that needed the strongest visual "punch"--those showcasing the Hulk's battle with Zeus--are spot-on, but most of the rest, particularly the pages featuring the Hulk's family and their coming to his rescue, are lackluster. I hope to see a stronger effort next time we see Pelletier and Miki on board, whenever that may be. Perhaps shorter stints by the artists in question, or more lead time between arcs, would improve the finished product.

So, the psychological journey of the Hulk with his awesome responsibilities to his family continues. While not delivering a home run, Greg Pak and Paul Pelletier, et al, nonetheless provide another solid story arc with "God Smash." The Hulk must take the thornier path to salvation for his family after finding that he couldn't just punch and hit those more powerful than he into submission. I admit, I'm quite anxious to see what the humbled Hulk's next move will be, especially considering what metaphorical chickens are coming home to roost in this issue's epilogue that paves the way for the next arc, "Planet Savage."

A note in closing: I really must thank Marvel Comics this month, as for the first time since Christmas 2008, there's a Hulk book on the stands for $2.99USD. The backup stories may be gone, but I for one won't miss them. We're eight pages lighter, and the dollar back in our collective pockets is greatly appreciated. I hear Jeff Parker's Hulk series is next starting with issue #30.1 in March. I hope this confidence is reflected in forthcoming sales figures. (But, hey, how about a little advertising, Marvel? DC has their "Holding the Line" promotion. Put something big on the cover. Something!)