This Wednesday, February 23, marks the release of a graphic novel collection I've been awaiting for some time: Incredible Hulks: Enigma Force. Over the last few months, you've seen me nip away at the stories collected in this tome, from my thoughts on the story of Hiro-Kala, Son of Hulk, as it progressed through Realm of Kings: Son of Hulk - The Conquest of Jarella's World #1-4, on to an interview with the writer of this duo of limited series, Scott Reed. This time out, I'm opting to review the whole package: the good, the bad, and the sub-microscopic. And away we go... 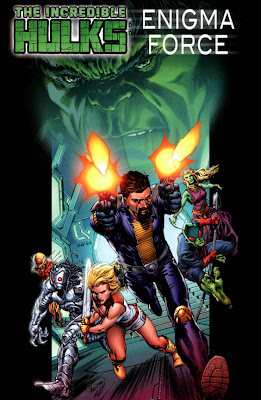 You can look at Incredible Hulks: Enigma Force, consisting of the two mini-arcs, "The Conquest of Jarella's World" and the "Enigma Force" series proper, two ways. First, there is the obvious intention begun in the first miniseries, picking up right where the previous Son of Hulk series left off (now available in the graphic novel collection Son of Hulk: Dark Son Rising) and paving the way for the arc now collected in the hardcover collection Incredible Hulks: Dark Son. Foremost in this collection, however, is the story of the resurgent group of subatomic swashbucklers, the Enigma Force, so named after the power which flows through their leader, Arcturus Rann. It's an apt name considering Marvel truly can't refer to the team by their original title: the Micronauts, a licensed Japanese toy property cum Marvel comic that spanned some eighty-five issues between 1978 and 1986 (over two regular series, two annuals, and a four-issue crossover series with the X-Men).

Many years and many incarnations later (anyone remember the Microns?), the team seems to have found their ideal new title, rooted in their illustrious past. The original core triad of Rann, Princess Marionette, and Bug (the latter now of Marvel's Guardians of the Galaxy series) are now joined by Carl, a Death's Head android imbued with some spark of personality; Jentorra, a K'aitian mystic and cousin to the Hulk's deceased love, Jarella; and an orphaned member of the race that laid waste to K'ai, the Psyklop. It's a shame we who remember the Micronauts' original incarnation can't have Acroyear, Biotron or any of the other characters who joined their illustrious ranks throughout the early 1980s, but we should be lucky we get glimpses of these characters at all! 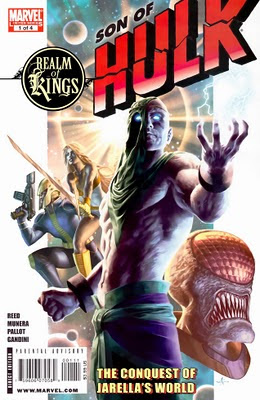 The first story, "The Conquest of Jarella's World," begins in media res, with Arcturus Rann, Mari, and Carl--the crew of the HMS Endeavor III--seeking out the legendary Enigma Force Nullifier. Of course, this being chiefly a book set in the Hulk's corner of the Marvel Universe, it's not long before they're on a mission to save the denizens of planet K'ai from the alien hordes of the Psyklop (last seen as a singular, humanoid enemy in The Incredible Hulk #203, waaaay back in 1976). Somewhere along the way, Rann discovers the location of the Nullifier, and comes in conflict with the Hulk's second son, Hiro-Kala, who has been transported through the Fault to the Microverse, the subatomic realm all these characters call home.

In the second story in this collection, set shortly after the conclusion of the first story, Rann and his compatriots track Hiro-Kala and his armies back through the Fault to the Marvel Universe proper during the timeframe the "Dark Son" storyline takes place. They continue their cat-and-mouse game from afar, with Bug, Jentorra, and the Psyklop having their roles to play. Along the way, the action continues on K'ai with the return of one character fans of the 1970s Jarella stories will definitely recognize, an added bonus for those fans but something that will leave everyone else scratching their heads.

Unfortunately, overall the series suffers in that the protagonists can never fulfill Rann's mission. They can't depose Hiro-Kala and return K'ai to the Microverse, because that's what the Hulks are charged with doing in the main event. The narrative never truly overlaps with any plot points of the larger story over in the Hulk's book but goes on its own parallel path. These choices limit Incredible Hulks: Enigma Force to being a character piece about Rann's past connections with K'ai, the building of the new team, and their part in the post-"Dark Son" status quo of the planet.

(As an aside, Marvel was originally home to a multitude of sub-atomic dimensions, but thanks to writer Peter David in issues 4-7 of his 2000 Captain Marvel series, all those realms including the ones in which K'ai and the Micronauts resided, merged into one. There's an untold story out there involving the X-Men, Thanos, and Baron Karza where all of these events unfolded. Best as I can figure it with a No-Prize-worthy explanation, this event must have also somehow rearranged the histories of the Microverse realms to allow for Rann to have been involved in K'ai's past, as revealed in the Enigma Force portion of this collection.) 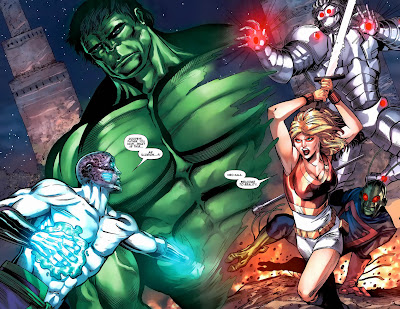 Scott Reed does the best he can granted that the Enigma Force can't truly figure into the main "Dark Son" story's conclusion, filling the tale with character moments. From the first story on through the second, this is really Arcturus Rann's journey, and it's the most in-depth characterization he's had in years. These seven issues together really read like a "pilot" episode of an ongoing Enigma Force series, setting up the complex relationships between all of these characters as well as potential situations for new "episodes." The key mystery that I enjoy--and which I asked Reed about at New York Comic Con last year--involves the evolution of the Psyklop from that one being who seemed native to the main Marvel Universe (having been introduced in Avengers #88) to a race of floating, alien creatures as they were at the beginning of the first issue in this collection. If we're to see more of the Enigma Force, that secret story is waiting to be told.

Whereas Reed's story shows direction and purpose, artist Miguel Munera literally evolves the further we go. In the beginning, I was struck by the various homages to the work of Rich Buckler and Sal Buscema, with various statues on K'ai clearly echoing their work, but much of the early figure work seemed static. It could be the work of various inkers, but Munera's layouts and detail grow stronger as these series progress, with Greg Adams as his best inker in the second half of the collection. It's never overly flashy artwork but he does tell the story ably and his dynamism grows. I'll look for Munera's skill to continue to develop as time goes on.

One note for completists: the Hiro-Kala story by Scott Reed and Miguel Munera that bridges "The Conquest of Jarella's World" and "Dark Son," from The Incredible Hulk #609-611, is not included here. The story did not feature the Enigma Force, which probably accounts for its exclusion. However, the three-part mini-arc is available in the Incredible Hulk Vol. 3: World War Hulks collection, now available in hardcover and available March 30 in softcover.

The Incredible Hulks: Enigma Force is an intriguing mix of concepts from the old days of The Incredible Hulk and the classic Micronauts series married with the ongoing story of the Hulk's new "Dark Son." In spite of the story's limitations as described above, there's a sense of fun that never leaves. For new comics with an old-school twist, you could do a lot worse than pick up this graphic novel collection. After all, it would sure be fun to finally read still more new adventures of Arcturus Rann and his crew. The Micronauts live again--who cares what they're called now--and it's about time.

The Incredible Hulks: Enigma Force is on sale February 23. The collection is priced at $19.99. Call 1-888-COMIC-BOOK or visit http://www.comicshoplocator.com to find a shop near you!