Another day, and another round of Hulkish excitement comes in the form of Greg Pak & Dale Eaglesham's first team effort on Incredible Hulks. Let's dive right in, shall we? 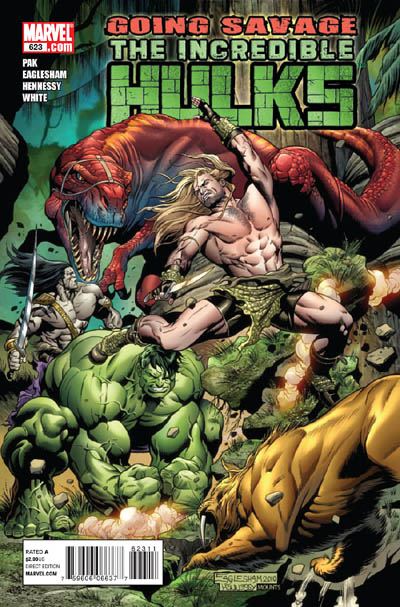 It's pretty stunning to open a Hulk book and see Ol' Greenskin, flat on his back, barely conscious, barely breathing, apparently not healing, but that's what you get when you open Incredible Hulks #623. He's survived--just barely--a battle with Zeus, with his family having saved him from a Promethean fate. With Hulk as the only mortal who's even close to Zeus' power level, and the Hulk not adequately invested in the battle, writer Greg Pak presents an intriguing puzzle: to enable the Hulk to heal properly, he must stay angry. That whole "madder the Hulk gets, the stronger he gets" part evidently extends to his durability and healing power as well. So what, you may ask, can keep the Hulk sufficiently angry to recover from his injuries? It's a communique from a certain friend in the Savage Land, where now dwells the remainder of the alien refugees who traveled with the Hulk from Sakaar after the destruction of Crown City--and one foe who started out as a fellow Warbound companion.

Greg Pak gives another strong outing on this issue of Incredible Hulks, with the main allure story-wise being a revisitation to the characters and world he introduced way back in "Planet Hulk," albeit relocated to Earth. From page one, I really enjoyed seeing the reunited Warbound, last seen as a whole in the miniseries of the same name in the aftermath of World War Hulk. To have them alongside Bruce Banner's Earthly family of Hulks is icing on the cake. In particular, I love Kate Waynesboro, a Bill Mantlo creation recently returned from comic book purgatory. Unless I miss my guess this issue marks the first time she's met Betty Ross (granted, Betty's in the form of Red She-Hulk, but still!). I'm hopeful to see more panel time for this duo, as their dynamic has the potential to be very entertaining. Pak has a grand time returning to his creations this month, with the Hulk recruiting them for a reunion with those left behind in the wake of World War Hulk. Leaving his family with Kate to heal, he tells them he's going with the Warbound this time out because "This is their fight. And they're warriors. Deep down inside...you're just puny humans." Nice little sentiment, don'tcha think? Of course, as many of you saw last issue, amid the Sakaarian refugees is Miek, Warbound companion turned perversion of everything the Hulk stood for on that world. We'll see next month just what he means to do with the Hulk, but from the end of this issue, it doesn't look good. 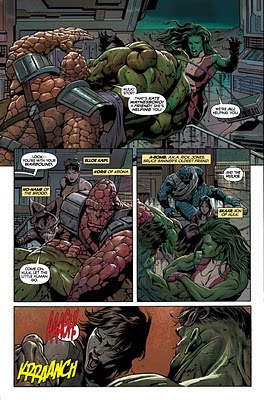 Speaking of looking good, I've got to hand it to artist Dale Eaglesham: He really knows his way around Marvel's myriad realms and peoples, drawing this issue with flourish I've not seen since Paul Pelletier's work on the "World War Hulks" arc in issues #609-611. Having made even Reed Richards look beefy in Jonathan Hickman's brilliant Fantastic Four run, he's able to cut loose with the Hulk, and he does so incredibly well. So well, in fact, that after one issue I can say what a shame it is that he's only drawing this three-issue arc, afterward departing to draw an eight-issue Alpha Flight series this summer. (If it's any consolation, the story will be by Greg Pak and his Herc co-writer Fred Van Lente.) The Hulk and his teams have seldom been so well-rendered, and the jungle vistas of the Savage Land have seldom looked so lush and authentic. Aided and abetted by inker Drew Hennessy and colorist Dean White (whose pages occasionally look murky), Eaglesham really brings his "A" game.

The bottom line: If you enjoyed the original "Planet Hulk" storyline and longed for Pak to revisit the characters and situations centered around that arc, then you'll have a Hulking good time with "Planet Savage." If this first third of the saga is any indication, we're in for a hell of a ride. With many familiar elements of that now-classic story, as well as the long-awaited return of a key villain, there will never be a better opportunity for the Hulk to stand up and smash. After all, it doesn't matter how many times a certain Green Goliath falls down, It matters how many times he gets up.