Storm Warning 4: Back at the Beginning (At Last!)

Here we are again! After a nearly two-week hiatus from posting about DC's resident Nuclear Man (that nasty fourth Superman movie notwithstanding), I'm journeying back to the mid-1990s. That may not be when the books in question came out, but it's when I finally rummaged through the back-issue bins at a few different stores--mostly the late, largely unlamented Mr. Jake's Funny Books in Rochester, PA, and another store whose name I don't recall, right on McKnight Road in front of Ross Park Mall. Strangely there's also a connection to where I currently live, since my father went on a trip to Arizona and bought me the majority of Firestorm's first series as well as the backup stories in The Flash at a shop I still frequent today, All About Books & Comics. Ah, but that's pretense, and the time for such is passed. Now, it's time to talk about the work of Firestorm's co-creator, Marvel and DC vet turned Hollywood guy, Gerry Conway!


In some ways it feels bizarre to talk about Gerry Conway as the second Firestorm writer I read, but it's true. I may have a tremendous affection for John Ostrander's tenure, and I enjoyed the constant forward momentum in learning about the true nature of Firestorm. However, there's something to be said for a status quo, and Conway created the foundations without which Ostrander wouldn't have been able to do such richly textured work. And with that in mind, may I say hot damn, these early Firestorm stories are fun!

Firestorm's early stories are so self-contained that outside of a handful of issues of The Flash featuring Professor Zoom (a tale for another blog entirely) they're the earliest DC Comics I care to own. Conway and his artist, longtime Marvel madman Allen Milgrom, do a terrific job with ol' Flamehead's origin in the first issue, setting up the origins of the first few villains he'd fight in Multiplex (#2) and Killer Frost (#3). The dynamic of the first five stories is interesting because while Ronnie Raymond remembers Firestorm, Professor Stein only knows of his involvement as one half of Firestorm while merged. When they fission, Stein suffers from amnesia. Ronnie is so self-absorbed about all the good they're doing as Firestorm that he neglects telling him, and so the Professor's life gets flushed ever deeper down the toilet.


The series starts off on decent enough footing, being pretty much a "Spider-Man" riff for DC. (In fact, more than once Firestorm has been called a Marvel character who makes his home at DC. Being a Marvel geek first and foremost, that could well explain my attraction to him.) Conway gave the characters quite the inversion, with Ronnie Raymond being a high school jock where Peter Parker was a bookworm. The Flash Thompson to his Peter was Cliff Carmichael, an intellectual who learned to fight from being beaten down--again, an inversion of the Spider-Man paradigm. Rounding out the supporting cast were Ronnie's girlfriend, Doreen Day; his father, Ed; and his principal, Wallace Hapgood. It's interesting that, with the exception of the Hyena, Firestorm's friends all come from Ronnie's life while his enemies come from Professor Stein's.

It's a shame after such interesting beginnings, then, that the "DC Explosion" (referring to an influx of talent and new titles in the mid-1970s) so quickly became the "DC Implosion" during which many, many titles were canceled in a short period due to economic downturn and rising paper costs. Firestorm the Nuclear Man was canceled abruptly at issue #5, after the introduction of the Hyena (#4) and the return of Multiplex (#5). A sixth issue was already nearly complete by the time the cancellation news came down, featuring the introduction of another new villain, Typhoon, and can be read right here online. The sixth issue's cover just turned up recently, and according to an interview with Gerry Conway, the never-written seventh issue's villain, "The Reptile Man," actually got recycled and became the Batman villain, Killer Croc. (There's a DC trivia bit for you!)

The series wasn't quickly forgotten, and soon Firestorm appeared alongside Superman in DC Comics Presents #17 (the company's answer to Marvel Team-Up). A few months later, Superman sponsored the Nuclear Man for membership in the Justice League of America with #179 of that series. Both these appearances, of course, were written by Firestorm co-creator Gerry Conway. Firestorm continued as a member of the Justice League (but I confess I only own #179). A few months later still, he made his grand reappearance in a regular feature all his own--that is, as the second feature in The Flash between issues 289 and 304. The series began by solving the worst crisis in the series' early run, having Ronnie reveal the secret of Firestorm to Professor Stein, which smartly also brought any readers who hadn't read the first series up to date. The stories continued in eight-page increments, illustrated by the likes of George Perez, Jim Starlin, Denys Cowan, and Pat Broderick. Aside from Stein learning his secret identity, the books are worthwhile only for the reworked first appearance of Typhoon (in #294-296) and the second Hyena story (#301-304), which established her identity as Ronnie's girlfriend's sister, Summer Day.


More noteworthy than these plot points was Firestorm's increased popularity, which enabled Conway and artist Broderick to re-launch a regular series, this time titled The Fury of Firestorm, the Nuclear Man, with its first issue cover-dated June of 1982. This is the series that really made me enjoy Pat Broderick's art. His style was very dynamic and provided just the right amount of detail. Gerry Conway was really having fun with the stories, too, introducing one player in the first issue who'd come to mean a lot to Firestorm to this day: Lorraine Reilly, daughter of Senator Walter Reilly. Upon meeting Firestorm, she develops quite the crush on him, which is made more interesting by the fact that she's in college while Ronnie is in high school--not to mention Ronnie already has a girlfriend in Doreen.

I'd really love to go in-depth on Conway's tenure on the book, but with several entries left to go, I'm afraid I'll have to give everyone the highlight reel. Here are a few storylines and ideas that are high points of The Fury of Firestorm up through the time John Ostrander took over: 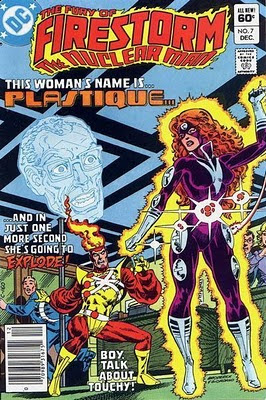 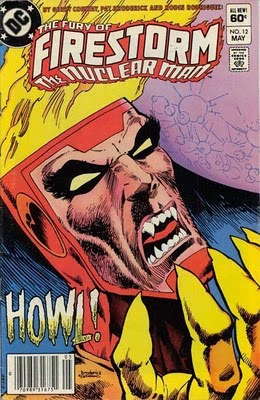 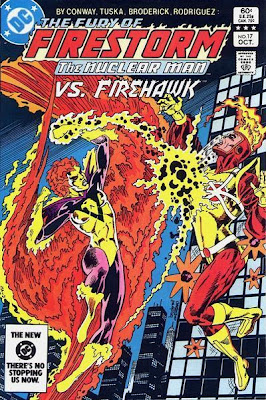 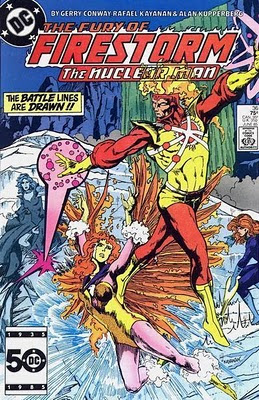 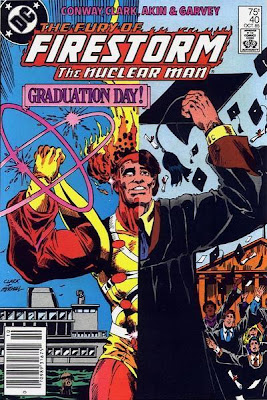 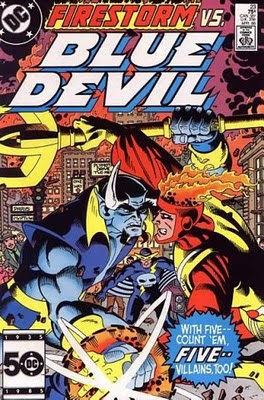 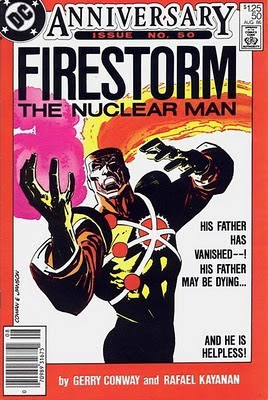 Issue #53 of The Fury of Firestorm was Conway's last, with the development of the key plot point that would inform John Ostrander's tenure: Martin Stein's brain tumor. Nobody really knows where Conway was going with that particular idea, but it's certain that he never intended all of the very radical changes Ostrander introduced. It really felt like he told most if not all the Firestorm stories he intended to tell, and I'm not really sure what other ideas he could have brought to the table if he'd stayed on board. I would've been anxious to see any return by Firehawk in the series, in light of her heavy involvement throughout the #20s-30s. Everything I've written in the first three sections of this feature follow here, with the return of Firehawk, the introduction of the Post-Crisis Parasite, the new incarnation of Firestorm, and the ongoing mystery of Killer Frost. Finally, we're ready to go forward, out of back-issue land.

Next: An in-depth examination of Firestorm's appearances between the end of his second regular series and the beginning of his third. Yes, friends, that means Extreme Justice, The Power Company, and something about a Green Lantern robot. Stay tuned!