Delays Suck (Or, Why You'll Wait For the Last Segment of Byrne on Hulk & Love Every Minute)

Due to the fact some other superb articles of some relevance have been brought to my attention, the third and final part of "John Byrne & The Hulk That Might Have Been" is postponed until next week. That's the bad news. The good news is that meanwhile, I'll be bringing you some more reviews, from Jeff Parker & Gabriel Hardman's Hulk #30.1, to the UK's Death's Head Volumes 1 & 2 in preparation for next week's return of the titular character in battle against the Hulk in Marvel Heroes #33. I've got two segments of "Storm Warning," my comprehensive review of all things Firestorm, to finish, and I'm also going to review that stinker of an Avengers storyline, "The Crossing." I've also recorded a brand-new episode of the Spectacular Spider-Cast which should be uploaded very soon to tide you over. As if that weren't enough, I do want to start some movie reviews, so those should be coming too. My sincere apologies for the delay, but I know you'll find more than enough things to keep you occupied here in the meantime!

Speaking of things to keep you occupied: Enjoy another vision of things to come, with artist Andy Bennett's brilliant rendition of Satana, the Devil's Daughter, fresh from Pittsburgh Comicon 2008! 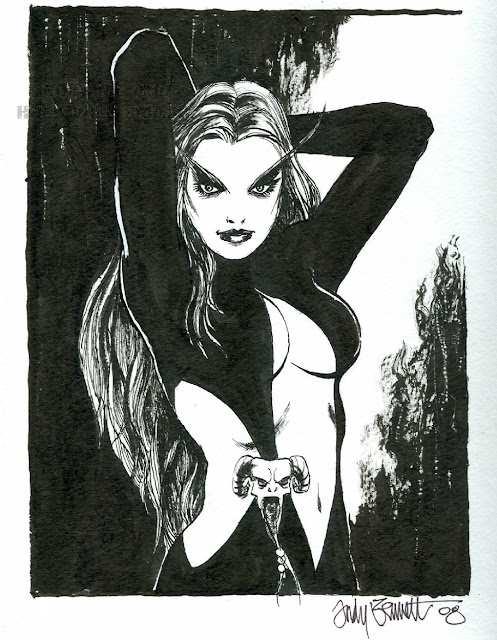