Welcome back! This article is the third in a series analyzing creator John Byrne's 1985-86 tenure on The Incredible Hulk. In the first section, I gave a loose idea for what Byrne intended to do during his time on the book. In the second, I gave an in-depth review of each of the eight issues he actually managed to finish before Marvel Comics Editor-in-Chief Jim Shooter gave him the boot. This time out, I'm going to say a few words about those eight issues as they stand and then give some of Byrne's ideas about the direction of the book that never saw print (save hints in interviews in books like Amazing Heroes, Comics Feature, Comics Interview and Marvel Age, which I'll quote as needed). 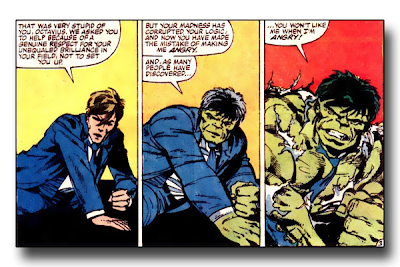 The most interesting thing I can state about John Byrne's Incredible Hulk upon this recent reread and having read the various interviews is that by itself, it's relatively inconsequential. I don't mean this in a bad way, in fact, quite the opposite: what the writer/artist brought to the character was grist for the mill. The Hulk himself became a mindless cipher, perhaps less interesting than at any other point during the series' run, Mantlo's tenure included. The one real, salient event that came out of the book during these eight issues was the marriage of Bruce and Betty, which Bruce would only have allowed to happen once he was free of the immediate specter of the Hulk. The rest of what occurred during these issues can best be called "set-up." But, you might ask, set-up for what?

What really occurred during the six issues of the main title? We discovered the Hulk talked like his old self, but was more brutish, more disconnected with Banner than ever before. Doc Samson exploited that disconnect and literally separated man from beast, leaving Banner cured and the Hulk a raging, mindless beast nobody had to think twice whether to kill. Banner founded a new group of Hulkbusters, each one a new character--nearly as blank a slate as the Hulk himself now was. Doc Samson became a guilt-ridden one-man army, obsessed with ending the new mindless Hulk's threat that he blamed himself for causing; the next generation's General Ross. And Betty Ross finally reconciled her existence, the choice between Bruce and her estranged father not really a choice at all. Then, in a coda that was to have been the issue after the last one we got, we learned the Hulk wasn't as mindless as we were all led to believe. (You can see that "Incredible Hulk #320" was clearly marked in pencil behind "Marvel Fanfare #29" on the original art pages.) 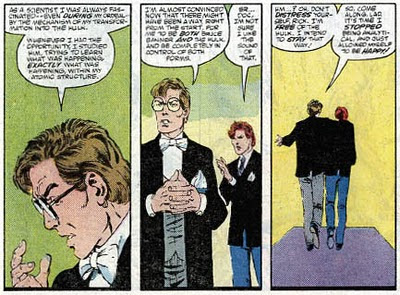 I hope you remember how I made a point of Banner's dialogue with Rick Jones in issue #319, of his fascination with the metamorphosis, and his desire to have found a way to be both man and beast, Banner and Hulk, right from the beginning. Then, he told Rick he had no intention of going back. Why do I not take Bruce Banner, eternal scientist and experimenter, at his word? Perhaps it has to do with Byrne's comments in Amazing Fantasy. Although the issue numbers change, his intentions remained: "From #318 on things start to get squiffy. Issue #318 is where we first see the new Hulk, and #319 is where we see the last of the old Hulk." Huh? New Hulk? Old Hulk? While Marvel fans of the era may remember that Rick Jones also became a Hulk in 1986, that event didn't occur under Byrne's watch but rather that of his successor, Al Milgrom. No, for reference on this "New Hulk" I must direct fans to the rather unusual appearance of the Hulk in John Byrne and Josef Rubinstein's illustration for his entry in The Official Handbook of the Marvel Universe, Deluxe Edition #5: 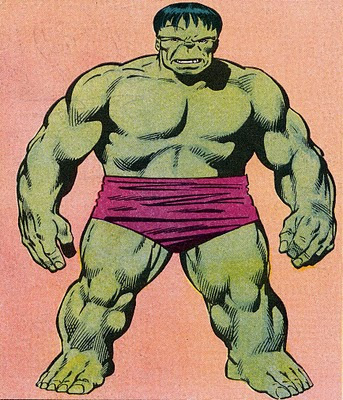 While you might at first not see the difference, take a closer look at the version above and compare it to what Byrne drew during the six issues in his run. He's bulkier, so much so that he appears shorter. The hair is not the shaggy 'do of the Buscema period. As the artist states, "Avengers #1 is my definitive Hulk. [...] I think the Kirby style of that period, the Kirby-[inker Dick] Ayers look, was very well suited to a character like the Hulk." The tall, muscular look (like "a big Arnold Schwarzenegger," he notes) was "a mistake. He should have stayed slab-like, inhuman-looking, like he was in those early issues. And that's what he's going to be getting back to looking like, as of #318, because he's going to undergo a physical change. That's where he gets turned back into what he looked like in the first couple of issues, and in Avengers #1." He also noted that the Hulk would be at reduced strength levels once this change occurred. And there's that issue number, #318, again. Are we getting a clearer picture yet?

For his brief talk of a "New Hulk," Byrne also spent much of the article discussing his take on the Banner/Hulk dichotomy and the nature of the metamorphosis. "[I]f the Hulk is the Hulk all the time, he's not as interesting as he is if he's a regular, ordinary guy who turns into this monster." This statement appears to indicate he wasn't committed to the Hulk as a separate creature from Banner. "Since I'm going back to the original Hulk, they will be separate sides of the same being again." Further: "I'm getting back to that reason and rage, the two elements of any normal human being. In the Hulk they are clearly separated into two distinct beings: Banner is reason, and the Hulk is rage. Bruce Banner is a nebbish. He's a wallflower. He's a scientist whose life stops at the test tubes. Betty [...] was starting to coax him out [of his shell] a little when the Hulk came on the scene." He credited former Hulk writer Roger Stern with the idea that gamma rays brought out one's repressed self. "[I]n Banner they release all this repressed rage, which is there, as far as I'm concerned, because he was a wallflower and a bookworm. So Banner becomes this raging behemoth, the Hulk. [...] Jennifer Walters, when she becomes She-Hulk, becomes a swinger. The Abomination wanted to kick ass; that's what comes out in most of us."

Even more curiously given that for the issues we saw, Banner and Hulk were separate beings, Byrne stated that he would be playing up the "Jekyll and Hyde" aspects of the character, acknowledging Stan Lee's basis for the character as a blend of Stevenson's character and Mary Shelley's Frankenstein. In Comics Interview, the writer said, "[B]y about the eighth issue, we will be back in a situation where he will be the creature of the night and he will be locking himself in the little room under the lake and pounding on the wall." Then, in Amazing Heroes: "...Banner's changes will be voluntary for the most part," he said, while Sanderson added "Banner will find an easy way of turning into the Hulk at will while retaining his full intelligence." Added Byrne: "For a few issues, it's going to seem very much like the Hulk Bill [Mantlo] was doing." However, Banner "will become drunk on [becoming the Hulk] because he's never had this kind of control over the Hulk, where he can turn into the Hulk for as long as he wants to." Eventually, "Banner will willingly become the Hulk, but it will become anathema to him, the way that [turning into Hyde] did to Jekyll, realizing 'I'm becoming this scuzzy guy and I can't help myself.'" Sanderson said "At times too, Banner will become the Hulk when the Hulk wants him to, not when the Banner side of him wants to."

Later, Byrne intended to create an "emotional schism between Banner and the Hulk" where "a lot of Banner's dark side will go into the Hulk, including, essentially, his sexuality. [...] It's not so much that the Hulk shows the sexual side, but that Banner has lost [it]. Lust is one of our quote--darker--unquote emotions, and all of our 'darker' emotions go to the Hulk, who sublimates everything into rage. So Banner will [become] progressively more aloof and standoffish...towards Betty. Betty will notice, yes, he doesn't get mad, he doesn't get upset, but he also doesn't get particularly loving. It's as if he's turning into a robot, when Banner is completely in control." 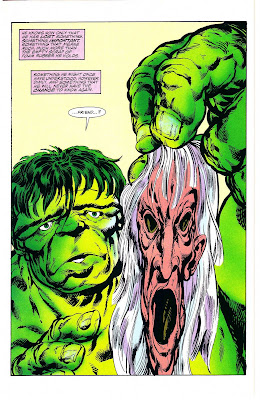 So, you might ask, if Byrne's Banner were still the Hulk, and he were to introduce a "New Hulk" an issue before the "Old Hulk" were seen for the last time, "What the hell is going on?" Reading the Comics Feature interview, the answer becomes quite obvious: "The World's trying to destroy [Hulk] like they've never tried before because now there's no threat to Bruce Banner. We were always holding back in the past; we were always worried about killing Banner if we killed Hulk. Now we can kill The Hulk." The Hulk who has been separated from Banner must die!

Who would kill him? Well, the new Hulkbusters and Doc Samson certainly seemed ready to deliver the killing blows, if their appearances in the extant issues were any judge. There's an important point I want to make, later, about why Banner himself couldn't make the killing blow but would, in fact, rig up the gamma rays and make himself into a new Hulk. And this situation would leave Banner and the Hulk exactly where Byrne wanted them to be.

I can definitely see Byrne's purpose in reducing the "original" Hulk to a mindless monster such as he did with his second issue, as it allowed us to extricate all empathy from the creature and put readers in the same frame of mind as Banner: this was a monster with no redeeming values, killing indiscriminately, who was separate from Banner and who had to be destroyed. It's interesting, then, that the last Byrne story in Marvel Fanfare featured a Hulk with some access to his original memories and personality. Meant to be Incredible Hulk #320, as mentioned earlier, it threw a spanner into the above philosophy and makes me truly wonder if the path to the "New Hulk" was as cut-and-dry as I first believed. Ah, good questions without answers!

And it's these few lingering questions that I'll bring into the fourth and final segment of this treatise, due out tomorrow! The grand finale will include as much else as I could piece together about Byrne's aborted plans, as well as some potential reasons why he was let go from the book. I've also got some observations about how the future of the book may have shaped up very differently if Byrne had in fact been able to unfurl his full vision. Stay tuned, folks, I promise you this one's HULKLUDED once and for all!