Lately, I've been doing a lot of thinking about divergent paths the Hulk might have taken in his long, storied history. My attention kept turning to what is arguably the biggest turning point of them all, which should be familiar to all accomplished Marvelites who read the series in the 1980s. Of course, I'm talking about the time when Bill Mantlo came full circle with his renovating of the Hulk, taking him from the classic savage incarnation of his early run, retreading the traditional tropes; through a two-year period where the Green Goliath possessed Bruce Banner's brain; and finally a year-long period wherein the Hulk possessed none of Banner's intellect, becoming instead a nearly-mindless behemoth akin to a newborn just learning about himself and his abilities. When the Hulk found himself nearly where he began his journey under Mantlo's talented pen, where would the next writer take him? Who would chart that course, be it backward into potential stagnation, or forward into some bold new era? 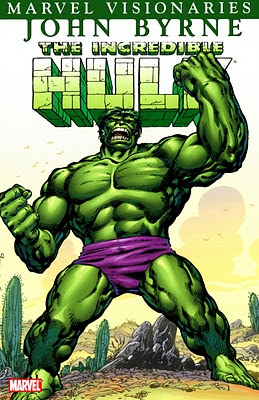 It surprised everyone in 1985 to learn that John Byrne would take up that chore--the 1970s wunderkind who'd teamed with writer Chris Claremont on the most popular era for Marvel's Uncanny X-Men and who forged his own path as both writer and artist of Fantastic Four starting in 1981. The creative teams of The Incredible Hulk and Alpha Flight--a team whom Byrne created in 1979--switched places, with Mantlo and his artistic team of a young Mike Mignola and finisher Gerry Talaoc taking the reins of the latter, while Byrne both wrote and drew the former. (They even flip-flopped inkers, colorists, letterers, and editors!) Mantlo would take the disparate elements of Alpha Flight, a team that hardly ever came together as an actual unit under Byrne, and ended up writing that book for a few years (#29-67), a pretty lengthy tenure. Meanwhile, John Byrne took over after Mantlo's nearly six-year stint on Incredible Hulk, and after proclaiming bold plans in an interview with comics historian Peter Sanderson for Fantagraphics' Amazing Heroes magazine (#76), he stayed on just six regular issues (#314-319) and an annual (#14) before being replaced by the unjustly-reviled Allen Milgrom as result of what has come to be known as a classic squabble between Byrne and Marvel editorial. (Soon, Byrne headed off down the street to DC Comics, where he'd revamp Superman in the limited series, The Man of Steel. A few months later, he left Fantastic Four after working on it for just over five years, completing his Marvel obligations for over a year.)

John Byrne has always had an intense reverence for "the way things were," which is to say an affection for the very early Marvel Age (c.f. the Lee/Kirby period in Fantastic Four), and his treatment of Incredible Hulk was, on the surface, no different. His stated objective was to return the character to his roots: the original six-issue series that ran from 1962-1963 and was originally canceled to make way for another title in Marvel's tiny distribution deal with DC (claimed in many sources to be Amazing Spider-Man, but more likely Sgt. Fury and His Howling Commandos, as its first issue shipped exactly two months after the last Hulk). Of course, he aimed to provide a consistency largely absent from those early issues (which had doubtless led to the original cancellation). He believed the Hulk had, in intervening years, accumulated a number of problems, all of which he could solve during his tenure.

The first problem was solved in the initial switching of creative teams with writer Mantlo. As Byrne stated in Amazing Heroes, "The Hulk has to be on Earth; he has to be somewhere that your average reader can relate to, even if it's New Mexico." Hence, the Beyonder, the godlike force behind Marvel Super Heroes Secret Wars and its then-current sequel, Secret Wars II, tricked Alpha Flight into bringing the Hulk back from the Crossroads dimension (where he'd been trapped in the final year of Mantlo's run) to serve as host to the disembodied consciousness of their fallen teammate, Walter Langkowski, aka Sasquatch. (Langkowski didn't get the Hulk's body, naturally, but would eventually return in the body of another deceased Alphan, the very feminine Snowbird, during Mantlo's work in that series.) Returned to Earth, the Hulk now possessed "a quasi-mystical homing instinct [...] so that wherever he is on Earth, he is oriented to the place where he was created. He knows where it is. He can get there." This ability actually laid the foundation for later writer Peter David, who would later explain the ability away by saying the Maestro, the evil Hulk of an alternate future who'd died at ground zero of the original G-bomb detonation, was actually "calling out" to his younger self, absorbing gamma radiation so that he might reconstitute. (See Incredible Hulk: Future Imperfect and Incredible Hulk #460-461.) Regardless of the ability's genesis, the point was made that the Hulk could and did find the desert where he was born, and Byrne's adventures would take advantage of the original New Mexico locale, which is unique in comics in the Lee/Kirby sixties, Byrne's eighties, and now. 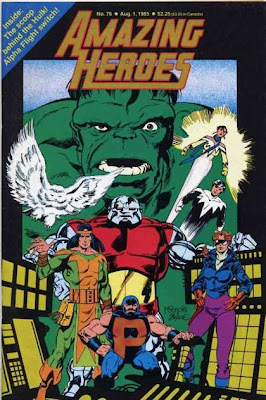 Another issue Byrne identified was the Hulk's very demeanor, which had shifted considerably from the original, malevolent creature who existed by night and often sought to conquer. Writers like Len Wein had developed the Hulk into an altogether different character--the "savage Hulk" incarnation, as later writers dubbed him, but which Byrne called something different. "I enjoyed Len's Hulk, the sort of capital 'G' Goofy Hulk. The slow-witted likable Hulk. I think it was Jim Starlin, or possibly Berni Wrightson, who said the Hulk was Marvel's Goofy," he said, referring to the Disney character--lovable and rather stupid, but with flashes of cleverness in his own unique way. Byrne preferred to liken him to Donald Duck, "because he reacts to everything at the same level, and it's all rage. Everything gets him angry." He wanted to restore the more primal Hulk of older vintage, constructing a scene in issue #314 where the Hulk kills a deer and just leaps away, whereas Wein's Hulk would have patted the animal on the head and said, "Nice deer." Here is where Byrne's vision seems least obvious in the seven issues we got, for in the majority the Hulk is much the same mindless behemoth we'd just gotten rid of in Mantlo's Crossroads story, although for vastly different reasons. (Mantlo's Banner committed psychic suicide, leaving the Hulk in a near-mindless state, whereas Byrne's monster was physically separated from Banner.) Only if we examined Byrne's unfinished plans would we see the hints of the original six issues in them.

Thirdly, Byrne wished to address the lack of a respectable rogues' gallery for the man-monster. In his first issue, he prominently featured five Hulk villains which he stated would never appear again under his tenure--the Leader, the Abomination, M.O.D.O.K., the Rhino, and the Juggernaut. Why retire them? "[B]ecause for the most part I feel they have been done to death. The Hulk has never really had a good rogues' gallery. He's tended to collect other people's bad guys, like the Juggernaut from The X-Men, like the Rhino from Spider-Man, and like Modok [sic] from Captain America." Remarkably, the six regular issues Byrne wrote and drew never featured an actual "Hulk villain"; in addition, the annual he wrote (#14) introduced a new villain who was killed in the same issue. The only villains Byrne wrote whom the Hulk fought before, Hammer & Anvil (from Incredible Hulk #182), only appeared in a story published several months after his run concluded, in the anthology title Marvel Fanfare (#29). But he had plans for at least one Hulk villain to return, with an unusual variant on another.

Because of the sheer length of this article, I'm splitting it up in three segments: this, the introduction, where I explain what I want to do; the second segment, wherein I review what Byrne actually accomplished during his eight-issue stint (counting the annual and Marvel Fanfare), comparing it with his intentions from the Amazing Heroes interview; and the final segment, wherein I cite the reasons for his exit from the book, chart the course he wanted to take in issues #320 and beyond, and compare that intended status quo to what eventually occurred. It's fair to say that the Hulk would likely be a very different character today if Byrne had been able to complete his journey. Although the stories themselves may be lackluster in certain facets, The Incredible Hulk #314-319 really are some of the most influential comics to feature the character in the 1980s, the pivot around which much of what follows revolve. In such a context, it's even more fascinating to think about those what-ifs, those might-have-beens.

As they said in the swingin' sixties: "HULKINUED!"