When last we left our intrepid Green Goliath, he was accompanying his Warbound on a trip to the Savage Land, where the races of Sakaar had petitioned its leader, Ka-Zar, for asylum. Someone's been killing the remaining Imperials, hence the jungle king's request for the Hulk and his companions. Only problem is, ever since the Hulk had a run-in with the Olympian Skyfather, he hasn't quite been himself, and so now he finds himself kidnapped, apart from his Warbound brethren, and held captive by the Warbound member who betrayed them all: Miek, the Unhived! 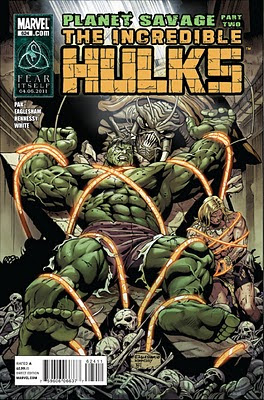 It occurred to me the other day as I was reading the preview pages to this issue that, for as long as writer Greg Pak has been chronicling the Hulk's adventures, he's never been alone. From that first moment he set foot on Sakaar, the Hulk always had someone to fight beside--first, the fighting unit that has come to be known as the Warbound, up through the end of World War Hulk; then, the de-powered Banner palled around with Skaar, A-Bomb, and the Warbound; and finally, the Hulk joined up with his extended family in an iteration where Marvel saw fit to re-title the book. Even Skaar wasn't alone in his own title, having Old Sam, Princess Omaka, and Hiro-Kala hanging around. This persistent new status quo flies in the face of years of adventures where the Hulk was a solo act who'd only occasionally team up with other superbeings. Perhaps it's ironic I discover this fact as we wind down the plural phase of this title (which, let's face it, is kind of off-putting; after all, there should only be one Hulk).

This storyline marks the long-awaited return of Miek to the title as antagonist, after his development in "Planet Hulk" and his downfall in World War Hulk, plus tales of his subsequent incarceration by S.H.I.E.L.D. in the Warbound limited series. Freed by the Chaos King in Chaos War #4, he escaped to find the remaining aliens who traveled with the Hulk to Earth, following up on many a loose plot thread from the crossover event of some four (!) years past. Make no mistake, Miek has been developed, since early in the "Planet Hulk" story, to assume the role of the Hulk's dark opposite, from his metamorphosis to "King Miek" to his twisting the Hulk's maxim to "never stop making them pay," to standing by and letting Imperials plant a bomb on the ship that brought Hulk to Sakaar and ensuring the brute would mistakenly blame the murder of millions on those who exiled him. Miek was so hung up on the death of his race's last queen, striking up a fatalist point of view, Machiavellian in execution, that everything must die in order for the next great thing to exist. Justifiably, the Hulk blames Miek for the murder of his wife, Caiera, as he must absolve himself of his own guilt in (mis)guiding the little bug to seek vengeance against his oppressors. He couldn't know Miek was more screwed up than he himself could ever hope to be.

In this issue, readers discover a bit more of the "big plan"--and by big plan, I mean Pak's as well as Miek's. "Planet Savage" is clearly the reason that Zeus kicked the living crud out of the Hulk two issues back, as without the Hulk at reduced physical and recuperative powers, Miek's plan would never, ever work. I'm not sure what to make of the plan--after all, given a certain context, it's about as oddly homoerotic as it is...well, just plain odd. (It doesn't get any clearer than the fades between a hallucinated bedroom encounter between Hulk and Red She-Hulk, and the reality of Miek whispering not-so-sweet nothings in the Hulk's ear.) True, certain answers are left ambiguous, but the bottom line is that Miek is raising a legion of monstrous insects using Imperials as hosts, calling this legion his "New Sakaar." The question, posed by No-Name of the Brood in the issue, becomes "Can the Hulk's healing power come back quickly enough to prevent the unthinkable?" And, although I'm sure it will, I'll admit a measure of disgust with the storyline as it's developed in this issue. The fact that Ka-Zar and the rest of the Warbound are perpetually in a "find the Hulk" mode this issue, chasing after their weakened friend, underscores that this arc represents the Hulk at his lowest point--having failed Miek, failed the Imperials who needed a home in the wake of his war, failed his family during the "God Smash" storyline, and failed himself. I guess the best part about this issue is, there's only one way to go from here, and that's up. 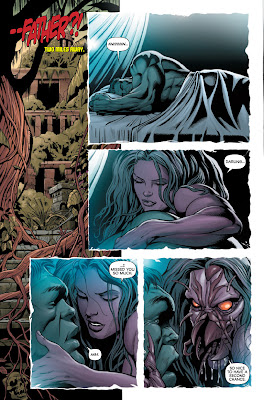 I don't mean to sound so cynical, so I'll interject some thoughts about the issue's actual strengths. Just as in the last issue, Dale Eaglesham and Drew Hennessy come on strong as the art team, with the only real misstep being Miek's hideous simplified redesign. It's obvious the character's new look came after Eaglesham drew this issue's cover, which still features the sinister-as-ever original look for King Miek. Otherwise, the monsters are appropriately disgusting, the battle scenes intense, the softer moments sensual, and the emotional moments sufficiently powerful. Dean White's colors amplify the gravity of the storyline all around. If I can say one truly good thing about this arc, it's that it sure looks pretty.

For the second issue of a three-part storyline, this section of "Planet Savage" really is a soft middle, with the Hulk left in a similar position at this issue's end to the last. We know a little more about Miek's plans, but it's not too far removed from what I would've guessed from the end of issue #623 after seeing the Imperials' corpses. I'm a bit flummoxed by the last two pages--I think we're dealing with a Hulk who's operating under hallucinated delusions--but next issue should make all clear. As it is, I've gone from hopeful in part one, two distressed with this second part to the storyline. Believe me when I say, I really hope there's a hell of a finish in two weeks. (And, yeah, having the Hulk operate solo for a while in the future, that wouldn't be a bad thing, either...)