Yes, I've been remiss in recent weeks, giving you a noticeable dearth of new blog entries. I want to begin blogging every day I can so I can bring you guys (and gals) as many new insights as I'm able. That'll mean retrospectives, interviews, and spotlights on some rare comics you just won't see on these shores (and that's a major hint to at least one new feature!). I went back to Pittsburgh, my hometown, and attended the Pittsburgh Comicon, getting about eleven sketches (that you'll see soon, both here and at my Comic Art Fans page) and buying a few unusual items. I've also catalogued more of my collection that remains on the east coast, and soon I'll be putting those books on eBay (or, if anyone wants to give me offers here, feel free!).

Speaking of old books for sale, I recently re-bought several issues of Incredible Hulk from the 1970s and 80s, replacing my lower-grade (Very Good and lower) issues with nice, Fine-or-better copies. They were deals I couldn't resist, but it does leave me with dozens of duplicate issues. They're "reader" copies so I'm willing to sell them on the cheap. Yes, virtually all of the Todd McFarlane issues are for sale, including the battle with Wolverine in #340. The earliest book I'm selling is #122, and the latest is #431. If interested, shoot me an email at delusionalhonesty [at] gmail [dot] com and I'll play Monty Hall. (And if you want to inquire about what non-Hulk books might be for sale, do so!)

Now then, what've we got today? Since I haven't blogged on them during the last couple weeks, I figured I'd take time out today before any more issues hit to review three books. They won't be my usual in-depth reviews since I'm squeezing three issues into one entry, but you'll get the idea. As in my last round of quick reviews, these ones will be summed up with four main classifications you can easily make sense of: Buy It (highly recommended), Read It (recommended), Skip It (unless it's a light week...), Burn It (a very special kind of hell). 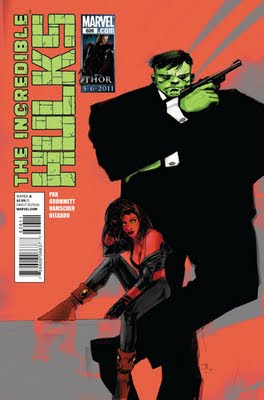 One of my longstanding wishes comes true this issue as artist Tom Grummett takes the Hulk's artistic reins for the four-part arc, "The Spy Who Smashed Me." He doesn't disappoint one bit, giving a classic feel to this saga that features the return of one of the Hulk's oldest foes. Although Greg Pak teased Tyrannus in a one-off story (#605), he devotes substantially more energy to his return here. It's a perfect storm of elements that Pak has at play, with Betty at risk of remaining Red She-Hulk forever even as she joins forces with Tyrannus, and Banner donning a tux (made from unstable molecules, natch) and teaming with Amadeus Cho in a wonderfully off kilter Bond-and-Q tag-team scheme.  The narrative moves fast, and Pak works overtime to involve the Hulk in a storyline that, when announced, didn't remotely seem like a "Hulk story." With Betty being at the center of the storyline, this arc may prove to be the most personal yet for Banner since the book became pluralized last fall. (Speaking of which, wasn't this issue solicited with the Hulk back in the singular role?)

This is a well-oiled, gamma-irradiated engine of storytelling, and it just might challenge Roger Stern & Sal Buscema's "They Who Wield Power" arc in the 80s for best Tyrannus story. Cheap hype? Perhaps. Regardless, this book was a treat after the darkness of "Planet Savage," brought to vivid life with Pak's knack for clever dialogue and Grummett's superb superheroic art. It's a fun, fun bit before the emotional torture that's sure to come in "Heart of the Monster." Simply put, Buy It. 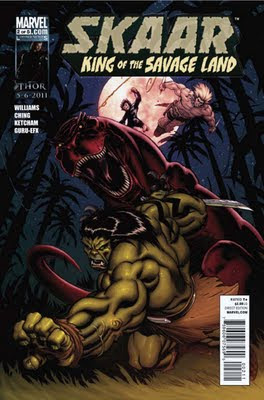 Skaar's second go-round at a solo title continues, with the Son of Hulk involved inconsequentially in a battle with "Kirby Kreations" Moonboy and Devil Dinosaur, while the real action occurs in the tribal council of the Savage Land, where a possessed Shanna sheds blood and turns the tribes against Ka-Zar.

A few short weeks ago, I lauded Rob Williams and Brian Ching's efforts on the first issue of this title, overlooking the unusual nature of the "tribal council" where Ka-Zar addressed the people while wearing a business suit. Obviously, it is writer Williams' effort to establish a dichotomy between the Savage Land's name and what it has become, making Ka-Zar out to be too wrapped up in the ways of more developed countries to be a suitable leader. That point is doubly the thrust of the Designer, who has possessed Shanna. The comparison doesn't quite work when you consider the Savage Land's history and that this series marks the first occasion for the tribal council to be presented thusly. This issue downplays Skaar's involvement, which is unusual considering his name's on the cover, and the lion's share of the narrative involves Ka-Zar and the Designer/Shanna. Now, it looks like Skaar will again be near the center of events with the next issue, as he's poised to attempt a rescue of his fellow Sakaarians (mentioned in this issue at last) from the Designer's, um, designs.

As it is, in spite of the continual lush artwork by Brian Ching, Williams' Skaar is a weak leading man. I hope that changes, and very soon, because the character, who's been well-developed under Greg Pak, risks being trampled by the grandoise narrative around him. Sadly, my concerns from the first issue, amplified through this issue's events, force me to downgrade my opinion. For now, you should definitely Skip It. 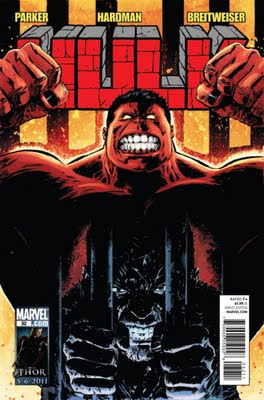 It's been fascinating stuff during these last several months since Jeff Parker and Gabriel Hardman attained control of the Scarlet Smasher's book. Parker brings old-school sensibilities to the book, effortlessly weaving sub-plots through the main story and through the recently-finished series of back-up tales. Several of those elements are going to come to a head next month, where if the cover's any indication, the Red Hulk will face four new foes, the final of which Parker introduces this month in Black Fog.

Speaking of the Red Hulk, this month's adventure for him amounts to little more than reminding readers of his ongoing troubles with General Fortean (with, don't get me wrong, a terrific dream sequence as drawn by Hardman) and giving him an unremarkable foe to fight in the form of...a tornado. In virtually all ways, the storyline echoes every old Len Wein/Herb Trimpe story where the Hulk was on the run from the military, wandering into some small town and helping them against some nebulous menace. In this, Parker only succeeds in marking time--dynamically illustrated time, as is always the case when Hardman and Breitweiser are involved, but time nonetheless.

He is much more successful in the other storyline in this issue, the origin of Black Fog, a serial killer endowed with superhuman abilities by Zero/One. Zero/One's childhood memories of the killer as a "boogeyman" become chilling reality thanks to her new power. His transformation is an excellent centerpiece, and I'm intrigued to see just where the character goes from here. I just hope there's time to examine his state of mind with the grand conclusion impending next month. Truly, his is an excellent lead-up, but add in the less-than-incredible Red Hulk plot means you should just Read It.

Next: Firestorm? The Crossing? More fun with the Hulk family? A convention sketch? Or something totally different, yes? Just wait!