Do You Fear...The Red Hulk Getting His Tuchas Kicked?

I sure hope not, because, well...what fun would this be, then? 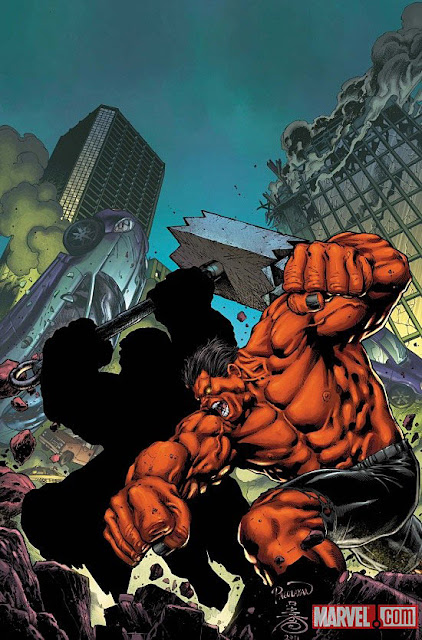 The Marvel Universe’s biggest, reddest brutalizer clashes with the forces of Fear Itself this July in Hulk #37, from acclaimed writer Jeff Parker and rising star Elena Casagrande! Which is stronger? Mortal terror or all-out rage? Red Hulk is going to find out with his fists as he goes toe-to-toe with the God of Fear’s most unexpected recruit in a brawl for the ages!

“Red Hulk's intersection with Fear Itself is really a defining moment for the character, showing what he's made of. It's really cool to be right up front during a happening like this!” said Parker. “It also gives us the chance to show what goes on with the other world threats who aren't commanding the center stage during a crucial event – in this case the newly returned M.O.D.O.K.!”

But which of the Serpent’s earthly avatars has specifically sought out Red Hulk and why? This July, can the Crimson Crusher withstand a treacherous battle with Worthy and make it out alive? Find out when Fear Itself stomps into Hulk #37!

Place your bets now, ladies and gents! Who's the guy all blacked out on the cover to July's issue #37? Is it the "Worthy" Hulk, hammer and all? To be honest, it doesn't really look like the hammer the Hulk has in all the other previews. (The Thing, on the other hand...!) And hey, wait, does this mean Jeff Parker's Hulk is now also double-shipping, as issues #34-35 were just solicited for June? And most importantly, what the heck has become of series artist Gabriel Hardman? Here's hoping he's just taking a breather and illustrating an upcoming arc!

More news as it becomes available. And yeah, yeah, I also heard that Ryan Stegman kid's drawing Fear Itself: Hulk Vs. Dracula, a three-issue miniseries written by X-Men's Victor Gischler.