Greetings from the east coast! Yes, I've been remiss in posting lately, but I've been tremendously busy with family obligations and with enjoying the company of friends including the various writers, artists, and other talent assembled at the Pittsburgh Comicon over the weekend of April 15-17. I'll be gradually adding art I amassed from the convention floor both here at the blog and at my Comic Art Fans page (link on the right-hand column). It was quite a fun show as it always is, made even more special through meeting some folks I follow on Twitter (Hello, Amber!) and through some inspired sketches. I had the pleasure of chatting up some pros who have actually read this very blog (but who are somewhat poor at matching names to faces...no worries, time will change that!). Also there were some artists who enjoyed the sketches I was procuring to the degree that, every time I crossed within range of their booths, they stopped me to see my latest pieces and snapped pictures! How flattering is that?

I just want to give a taste of what to expect in days to come--though those of you on my Twitter feed have already glimpsed the names of a few subjects that were sketched. If you've seen the CAF page, you know I like to pick subjects not everyone knows about. I like unique sketches because it gives the artists the opportunity to journey outside their comfort zone, and it gives me a special kind of notoriety. (I can't tell you how many times I heard something along the lines of, "So-and-so warned me about you!")

The first piece I'm showing comes courtesy of Pittsburgh native Dave Wachter, who's drawing IDW's Robert Bloch's That Hellbound Train this June (which I strongly suggest you all pre-order, now!). I showed Dave a few potential subjects for whom I had reference, and let him choose. The winner? A hint of one of my other upcoming review posts: Rhodey's alien armor from during "The Crossing," the Eidolon Warwear version of War Machine. The original design is by Jim Calafiore, whom I've met at many a convention in years past (and who is doing fabulous things on Gail Simone's Secret Six). I believe there was some discussion of this costume being very unusual, yet really much ado about nothing in particular. Just so oddball a pick it was too good (or is that bad?) to pass up! 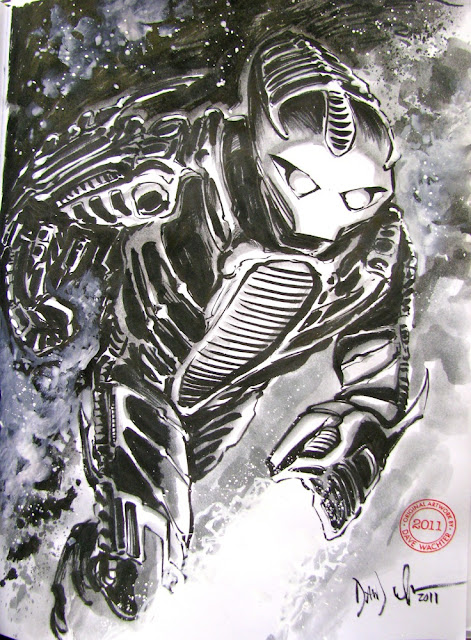 What do you think, sirs?

More on the way later in the week!