Today, I am one happy, happy writer!

Talk about your whirlwind weeks! I've been trying to keep the big news under wraps, but the secret is finally out, and it'll be everywhere soon enough, so get in on the ground floor right here and now!

You guys, my devoted fans of this very blog, know that I love, love, love writing, and I love, love, love comics. For years, it's been a real dream of mine to share my passion with a larger audience--to "prove myself" to the teeming masses. It's true, I wanted to actually be an artist, many years ago, when I would staple sheets of typing paper together and doodle incomprehensible pictures in crayon or colored pencil that in my mind were battles between Spider-Man and the Hulk, or an adaptation of an episode of Spider-Man and His Amazing Friends, or somesuch. Soon enough I learned my talent wasn't in illustration but in telling the stories themselves, conjuring pictures with words.

A few years ago, I tried--then unsuccessfully--to catch Marvel's attention with a script about Daimon Hellstrom, the Son of Satan. It was my first--but not my last--flirtation with script format. I relished it and it made me hungry for more. I still look to that script for inspiration today! Of course, in the times since, I've been writing comics reviews, conducting interviews, and otherwise causing mischief here on this very blog and elsewhere on the 'net. Last year I established a Facebook page and started tweeting up a storm. This year, things have just amped up and up, and before I knew it, I found myself getting noticed by those great big powers-that-be!

And now, well, Greg Pak is leaving The Incredible Hulk. Which is a real shame. I mean, who could take over from the man and stand a ghost of a chance at keeping the fans from his tenure? Who could balance the diverse supporting cast that he developed, while at the same time appealing to new fans? Who could bring a depth of knowledge about the character and his universe, while at the same time producing truly off-the-wall action? Who could keep the momentum going in the fifteen remaining issues until the big 50th anniversary issue, #650, shipping right near the release of 2012's Avengers movie by Joss Whedon?

Yeah, that's just who I mean!

No, I can't discuss a whole lot of details just yet. It's way too early for that! (Matt, Mark, Joe & Axel would kill me.) But if you're a fan of any era of the Green Goliath, I think you'll enjoy the places I'm going to take him. Of course, there are still five months--ten issues--of stories by Greg Pak, and I don't want to take anything away from him. He's going to be leaving on top, that's for sure! But there are bigger things coming. You think Banner's had his share of problems this year? Just you wait. Think the Hulk's gotten a bit too domesticated? Heh-heh.

Do you want to know more? Are you as ecstatic as I am for the future? Click the picture below, and learn as much as I can say. Yes, it's going to happen, and yes, I do trust you'll all be there! 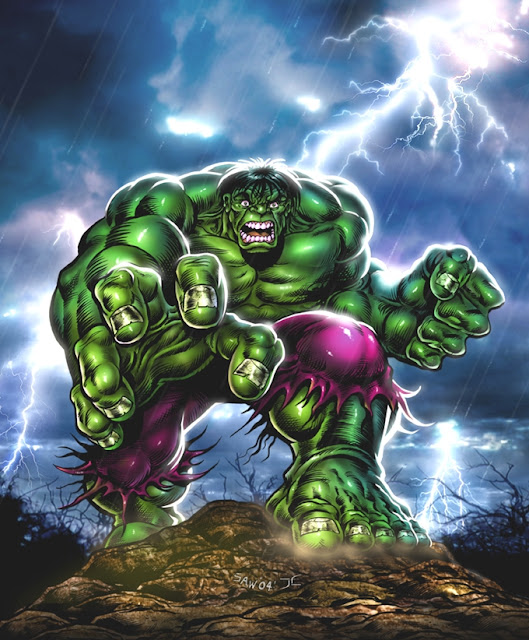