So, I've Been Busy... (It's Not Like a Dire Wraith Assumed My Identity!)

And if I were, I sure as sin wouldn't post a picture of this guy, on the off chance that he might, you know, come to life and send me to Limbo with that Neutralizer gizmo of his.

To whet your appetites until I return with Hulkish reviews tomorrow, here's another sketch! 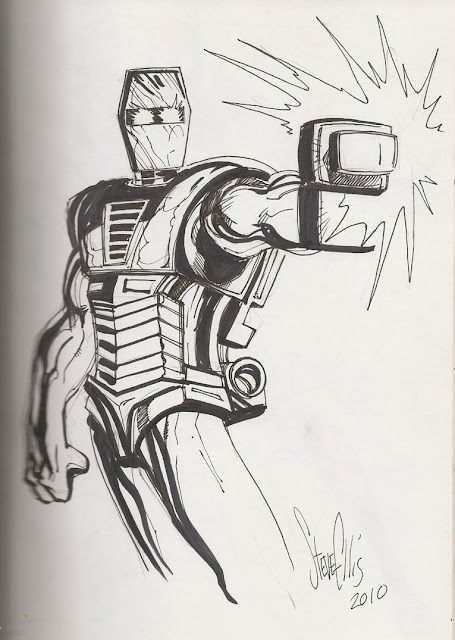 Steve Ellis (of High Moon and Box 13 fame--available at comiXology!) drew this sketch of Rom, Spaceknight for me at New York Comic-Con 2010. I understand he and his frequent collaborator David Gallaher (who got hitched this past weekend to Valerie D'Orazio...congrats, ya lucky bum!) are big fans of the ol' toaster as developed for Marvel in 1979 by Bill Mantlo & Sal Buscema! Here he is, slightly smaller than life, ready to shine the crimson light of truth on all who might bar him from regaining his lost humanity. I hope this one's been worth the wait. He's been sitting in my sketchbook since October with nobody to keep him company but, well...a whole mess of esoteric characters! Please, give him some love!

(Oh! And be on the lookout for some Spaceknights in this week's Avengers #12.1 by Brian Michael Bendis & Brian Hitch!)