One of the first teams whose stories I followed on the newsstand back in 1985 wasn't the X-Men, it wasn't the Justice League, and it wasn't even the Micronauts. I distinctly remember walking into Triangle News in downtown Beaver Falls (which long ago went out of business) and buying the above book, Alpha Flight #24. And from then on, I was hooked on the Canadian super-team. It was hopeless.

The characters were interesting--Sasquatch was my favorite, in part because he was in the first comic I'd ever bought (Incredible Hulk #272), but also I liked the idea of the Great Beasts, whose mega-arc really was a backdrop for the series under writer/artist John Byrne. I liked the self-made-man James MacDonald Hudson as Guardian, his sexy wife Heather, and their relationship with the then-enigmatic Wolverine. I liked Puck (who wouldn't, eh?) and Shaman, a sort of Native American Dr. Strange (before I really got into Dr. Strange). Snowbird also really appealed to me as a goddess who was trying to live life as a normal woman. I even found Marrina an intensely fascinating character in spite of her complicated backstory and the out-of-control thing she became near the end. And Aurora and Northstar were...well, Aurora (n'est-ce pas?) and Northstar. Beta Flight, Gamma Flight, Omega Flight...wow! And add in the wild story of Guardian's "return" from death. It was thrilling stuff and a great time to be a fan.

I've followed the team's exploits since then--buying the last few issues of John Byrne's two-plus-year run, then enjoying a mail subscription to Bill Mantlo's issues, which were turbulent and really upset the original team dynamic. (Not to mention the editorial interference I've heard about since!). I left shortly after the book went direct-sale only with #52 and upgraded formats with #61. I remember seeing various artistic talents on the book, from Mike Mignola, to Dave Ross, to Jon Bogdanove, to future superstar Jim Lee. I remember the introduction of the Purple Girl, Pestilence, Goblyn, Manikin, Scramble and the Dreamqueen. I remember when they brought back Sasquatch in Snowbird's body. (Anyone else wanna forget they ever heard the name 'Wanda Langkowski'?) 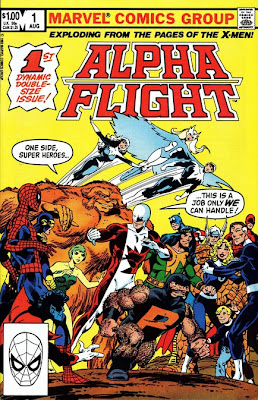 So yes, eventually I fell off the Alpha Flight bandwagon, but years later I'd return, and even amass a collection of every issue I'd missed. That included the return of James MacDonald Hudson as Guardian for just over a year in Fabian Nicieza and Michael Bair's "Building Blocks" series-within-a-series, a few crossovers with the Infinity War and Infinity Crusade that ran rampant in the early 1990s, and the series finale by Simon Furman. Fortunately it also included the remainder of John Byrne's tenure. I also bought the second and third volumes of the series, but many years later, the only issues I still own are Byrne's, and a small handful of the rest.

It's interesting that John Byrne's series is so highly regarded, and yet precious few have actually used the same group as he did for those two years and change. Both the second and third volumes used very different lineups, as did Omega Flight which didn't attract me beyond the second issue. It's also worth mentioning that for much of his series, the team wasn't united, but off having adventures in certain contingents. Sasquatch would go off by himself, Northstar and Aurora would do their own thing, Puck flew solo, etc. Only for a few issues in the middle and toward the end did they really form a cohesive team, and those moments were fleeting until Mantlo took control, steering the team toward a more conventional feel.

A few short months ago, Marvel Comics released word that they were bringing back Alpha Flight in an eight issue limited series (which has since added one issue). And for the first time since the original Byrne series, some...things...are happening. I've got the feeling this is going to be great, and to prove it, I recently interviewed co-writer Fred Van Lente, who with Greg Pak (Incredible Hulks, Herc, Silver Surfer) is bringing Alpha back. Take a look, why don't you?

Click here to read my interview with Fred Van Lente at Jameson Lee's The Daily P.O.P.! 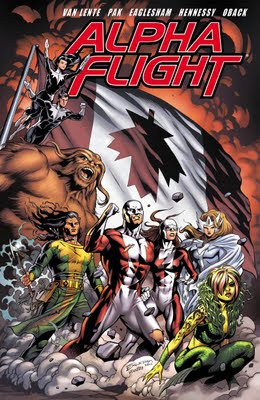