A round of much-delayed, eagerly-awaited reviews, mes amis! 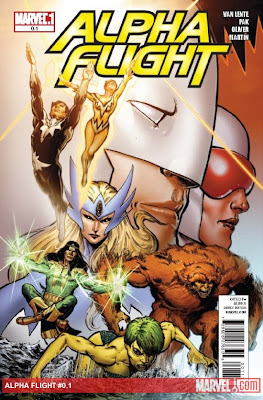 The eight-issue miniseries begins in earnest in a few weeks, but Alpha Flight #0.1, which shipped May 18, serves as a terrific introduction to the characters and concepts for the uninitiated. The twenty-page story, behind a cover by Phil Jiminez that shows nearly all the original Alpha Flight cast from their 1980s heyday, introduces the ensemble, as well as some other peripheral cast from the "good old days." It's true what writer Fred Van Lente said: this series marks the first time since the early days of John Byrne and Bill Mantlo that virtually the entire group has been the focus. Guardian, Vindicator, Sasquatch, Shaman, Marrina, Northstar and Aurora are all here, and purely from a nostalgic point of view, seeing them together just feels good.

Van Lente and Pak don't let nostalgia carry the story, however, wisely involving the Alphans in a plot to interrupt Canadian elections, ostensibly planned by someone very familiar to the title's middle years. Both that villainess and the specter of the elections themselves are portents of bigger things sure to erupt in the series proper. The only drawback in the book is in the artistic layouts by Ben Oliver. While the figures themselves look great, Oliver's panel shape--always jagged, seldom having 90 degree angles--are a distraction at best and a source of vertigo at worst. I must say I'm glad the miniseries itself will be illustrated by another artist (Dale Eaglesham).

I'm definitely expecting the storyline to ramp up with the actual first issue in June, but this is still a solid introduction with an accessible story, on-point characterization, and above-average artwork. Do yourself a favor and Buy It. 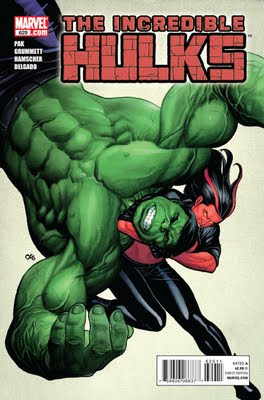 For the conclusion of Greg Pak's penultimate arc, "The Spy Who Smashed Me," which had been a surprisingly off-beat and humorous arc in its previous three sections, this story takes a decidedly standard superheroic slant. Behind another generic cover, this time by fan-favorite Frank Cho, "License to Smash" nonetheless provides an emotional finale that serves as setup for "Heart of the Monster," beginning next issue.

When you're talking about emotional Hulk stories, it seems the powers-that-be can seldom do one without involving Betty Ross. It's her eyes through which we're supposed to see Banner and the Hulk this issue. However, Betty here bears little, if any, resemblance to the same strong character of Peter David's tenure on the book. Becoming Red She-Hulk appears to have split the character into her strong and weak personality halves, with neither one of them showing exactly why Bruce carries such a torch for her. And maybe that's the point, right?

Arch-foe Tyrannus descends into his traditional mad brand of villainy for this final chapter, leaving the real emotional arc to be solved between Bruce/Hulk and Betty/Red She-Hulk. True, we do finally see what's in the urn and that particular conclusion is perplexing (and may provide a hint to next issue's story). If nothing else, Greg Pak has provided an excellent emotional underpinning for his final arc with this issue's soft conclusion. Tom Grummett finishes the storyline in his same standard superheroic style, which is still far above most else out there. While still not as strong as the previous three parts, you should still definitely Read It. 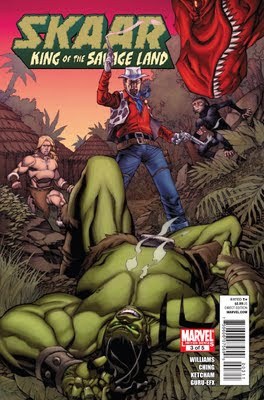 The Savage Land adventure of Skaar, Son of Hulk, continues as he teams with Ka-Zar and delves deeper into the Designer's mysteries while encountering more of the area's unusual inhabitants. Rob Williams continues the story which seems to have less and less to do with the titular character and more to do with facets of Marvel continuity the writer wants to play with "just because." You can see one of the characters in question--Kid Colt--on the issue's cover, and while he looks a little different inside, he's still symptomatic of the "anything that will stick"-ness of the narrative.

On the plus side, Brian Ching's artwork continues to impress. He's really right at home in the jungle landscapes, drawing monsters of all shapes and sizes, from Skaar himself to dinosaurs. Guru-eFX similarly brings the pages to life with their colors. Still, I'm severely losing interest in the narrative as Skaar continues to be moved around like a pawn on a chessboard. I don't have much hope the remaining two issues will turn things around. Unless you have nothing better to read, I'm firmly of the opinion you should Skip It.