Although I'm sure we're in for some surprises, it seems on the surface the question has been answered, "Who will take over for Greg Pak after his last issue of The Incredible Hulk?" Nobody! Press release, coming right up (all emphasis mine)... 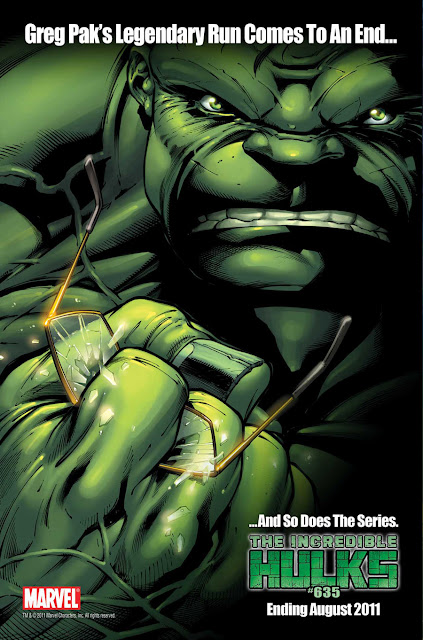 Greg Pak’s biggest story yet, “Heart Of The Monster”, brings dire consequences to the Green Goliath and those close to him.

What happens when the furious monster inside Bruce Banner says, “ENOUGH”?

The writer of Planet Hulk and World War Hulk brings his critically acclaimed Incredible Hulks run to a close…with a SMASH.

Catch the oversized final issue of the long running series, with a monster sized story and dozens of extras celebrating Greg Pak’s run, that no fan of the Jade Giant can miss.


So, what's in the future for the ever-incredible Hulk? Will Thad Ross be the only Hulk with a title to call his own? What extras are we talking about in this issue aside from the multiple variant covers and that blank cover you can bet I'll be taking to conventions? Any extra backup stories inside? How big will the issue in question be? And might there be one final enemy beyond Fin Fang Foom, one long rumored to return? Mmmmmmmaybe?

One thing I'm relatively certain of is that once again, we're going to get a senseless renumbering of the series when it's on the cusp of a terrific anniversary number (#650, which if keeping the current schedule, would've been available just in time for the character's 50th anniversary next year). What it would also mean is, unless things change, the Red Hulk title will outnumber the title of the character from whom he spun off, and that's rather backwards. So, is there a sea change in store for Red Hulk, too?

So many questions, indeed...