5 Questions With Greg Pak: "Heart of the Monster"

This week marks the release of the first part of writer Greg Pak's swan song on The Incredible Hulks. Since beginning work on the Hulk character in 2006 on "Planet Hulk," he's become an authority on ol' Greenskin and easily the most admired writer to pen the series since the departure of Peter David. What opening salvo of his ultimate arc would be complete without an interview with the man himself?

(If all goes well, this post will soon be updated with new preview art!) 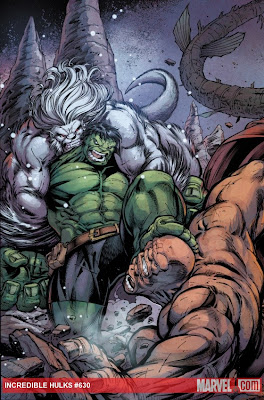 DELUSIONAL HONESTY: So, "Heart of the Monster" is your final Hulk story. What's it all about, and why end your story here?

GREG PAK: We're finally getting to the core of who the Hulk really is and what he really wants. And that's a very, very scary place. This is the culmination of the five-and-a-half year arc of stories that began with "Planet Hulk" back in 2006. Over the years, the Hulk, who always said he just wants to be left alone, has surrounded himself with friends and family. He's grown from monster to hero and then wavered back and forth a few times. And he's seen the terrible price that those who are close to him tend to pay, again and again. In "Heart of the Monster," the Hulk has finally had enough. And he'll finally get what he's always really wanted. Lord help us all.

DH: It appears Tyrannus and Red She-Hulk will be central to your finale, with their involvement in "The Spy Who Smashed Me" and that shocking conclusion. How did that tableau come to mind, and how do the characters stand to impact "Heart of the Monster"?

GP: Tyrannus and Red She-Hulk absolutely will pay a key role in this final story arc. Red She-Hulk, a.k.a. Betty Ross, is, of course, Bruce Banner's first love. There's no one who can push his buttons like she can -- and we're about to learn what she's really after. And Tyrannus is the Hulk's oldest surviving arch-enemy. He's had plenty of time to prepare for this final conflict.

GP: A big part of the story centers around a wishing well. Everyone's going to get what he or she wants, for better or for worse. And I guess I might have granted a few wishes to myself along the way. These are all Hulk villains I've loved forever and this seemed like a great place to be able to play with them. But they're all great characters with the right backstories and objectives to hit the Hulk in just the right way in this final, climactic storyline.

DH: Do you have any extra guest stars or villains in store for these last 6 issues?

GP: A brilliant and lovely Italian crypto-mythologist might make a reappearance. And a man whom some might call Bruce Banner's best friend in the superhero community will play a big role in the last two issues.

DH: What have you learned about the Hulk & his cast over your tenure?

The amazing thing about writing the Hulk is realizing how far previous writers were willing to take their stories and how willingly audiences followed. The Hulk's almost ridiculously simple -- when Banner gets mad, he Hulks out and smashes. But great writers and devoted readers have explored and embraced all of the different, deep, emotional stories that stem from that setup. The thing I'm most impressed by is how far Hulk fans are willing to go with the tragic aspects of the character. It's a human truth -- when you give yourself over to wrath, no matter how justified, your story more often than not will turn into a tragedy. I'm grateful for readers who are so willing to grapple with stories like that -- and who understand that the triumphs our beloved green goliath occasionally achieves are so much sweeter as a result.


Many thanks to Mr. Pak for teasing us with all the turbulent times just around the corner for everyone's favorite Green Goliath! Incredible Hulks #630 is now on sale at your local comics retailer. (Please support them!) The series ships biweekly, and the final issue, #635, is now available for order in Diamond Previews with several variants, including a blank one upon which you can obtain a snazzy original sketch!