Be Careful What You Wish For (Review: Incredible Hulks #630) 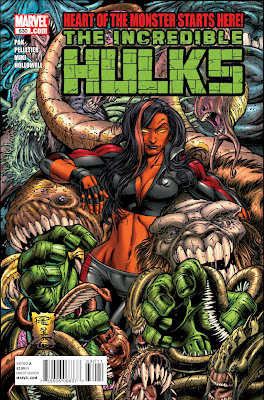 The Incredible Hulks #630
"Heart of the Monster," Part One

Let's be clear: I certainly didn't wish for the end of Greg Pak's tenure on the Hulk. But if you've been following this blog, you've known it was coming. (Exhibits A and B.)

That said, this issue gets the ball rolling with part one of Pak's six-part sendoff, the aptly-titled "Heart of the Monster." We pick up after the end of the last arc, with Bruce Banner deciding to repress his feelings and just move on from Betty, who has apparently forsaken her human identity in favor of the more "liberated" form of Red She-Hulk. Not just that, she's gone away with Tyrannus, one of the Hulk's oldest foes. How in the world, then, can Banner remain icily calm at a time like this? Can his friends help him in this time of need? And what in the world does Tyrannus have up his sleeve now?

In the last few arcs, Pak has progressively pared down the Hulk's supporting cast, which burgeoned under his watch these last few years. He's had the Hulk and family confront Skaar's twin brother Hiro-Kala in "Dark Son"; he's dealt with the character's new connections with Hercules and the Greek gods during "Chaos War"; he's had the Hulk say farewell to his son Skaar and the Warbound, now in the Savage Land, in "Planet Savage"; he's had the Hulk deal conclusively with Miek from "Planet Hulk" in the same story; and in the last arc he gave readers as bare bones a cast as ever, centering on the Bruce-Betty paradigm and bringing in Amadeus Cho to lighten the mood. Introduced by Pak and artist Takeshi Miyazawa in Amazing Fantasy #15 only a month or so before he began his tenure on this book (in a story guest-starring the Hulk, no less), his presence feels an important component of winding up the writer's tenure with ol' Greenskin. Rick Jones, who recently became "A-Bomb" in the wake of World War Hulk, and Jen Walters, the original She-Hulk, round out the team of Hulks. Although it's certainly possible others will return before the ending in #635, the story feels complete with these four as the protagonists.

Of course, I did say "protagonists," so it's only natural that more villains arrive to justify the six-part storyline. Yet another of Bruce Banner's former loves arrives during the story, kicking the narrative in another direction and also bringing Betty's situation squarely back in focus for the Hulk family. It's an interesting move, certainly, as is Pak's decision to involve even more villains on the story's final page. I'm honestly torn, as while I like virtually all the villains shown, from various eras in Hulk history, it feels like he may be trying to do too much, too quickly, especially given the flimsy explanation offered for their sudden presence. (Hint: Monkey's Paw.) Still, this first part of the storyline is meant to set up the rest of the arc, and in that respect Pak succeeds admirably in defining tension, heightened emotion, and terrifically high stakes.

Returning this issue to send Greg Pak and the Hulk off on their separate ways is the artistic team of Paul Pelletier and Danny Miki, aided by colorist Morry Hollowell (who formerly colored Ed McGuinness' end run on Hulk). Pelletier is a terrific storyteller, putting forth an excellent first installment, and Miki and Hollowell complement his linework superbly.  He can convey so much in a single panel, and ably shows the Hulk's power as well as quieter, emotional moments. I hope he can maintain this level of quality throughout all six parts of this storyline.

"Heart of the Monster" begins here, so we have five more issues of Greg Pak's awe-inspiring work with the Hulk and his supporting cast left. Part one has terrific artwork and a solid story, if a little reliant on coincidence and a need to make developments occur quickly. I imagine I'll have more to say as the story moves onward, but this issue's worth checking out. Please Read It today!