Avengers - The Crossing: Worse Than Visiting Betty Ford, As Voted By Iron Man (2) 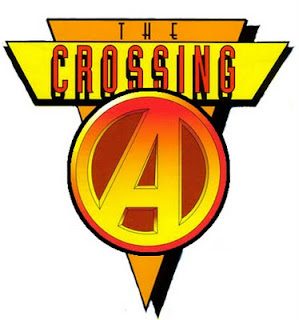 Welcome back my friends, to the show that never ends...

Continuing my (over-)analysis of "The Crossing," the storyline many Avengers fans decry as a mighty embarrassment, this time we're getting to the middle seven pieces of the puzzle, where the immediate mysteries are (somewhat) resolved and the team undergoes some drastic changes, for better or worse. We'll begin with Force Works #18, which technically belongs in our last installment but whose revelations fit much better in this segment. We'll then ramp up to the four-part finale, "TimeSlide," wherein...well, you know. Everyone got their air sickness bags? It's gonna be a bumpy ride...


Force Works' Hex-Ship crash-lands in the lost land of Vietnam. Back at the home base, Cybermancer and Spider-Woman's daughter Rachel wonder what's become of the team and Works PR rep Amanda Chaney realizes she can't remember anything about Moonraker having joined the team. (News flash: ask Abnett & Lanning!) She asks the Works computer Plato instead, and they discover temporal radiation emanating from a previously-unknown sub-basement. The basement contains Virgil, a "global chronography analysis and control suite" created by Timely Industries, a company founded by Tony Stark in 2009--fourteen years in the future. (Readers may remember "Victor Timely" was one of Kang's aliases from the early 20th Century. That sound you just heard was every continuity nerd's head exploding.) In Vietnam, Moonraker comes across the Temple of Agaphaur built by the Priests of Pama. A team of Anachronauts engages the team in battle. In the middle of the fight, a boy exposed to "chronal energies" transforms into an adult, winged creature the Anachronauts call an "alpha-level candidate," hinting at their endgame while the rest of us are swatting at the swarm of buzzwords. His memories resurfacing, Moonraker reveals himself as Gustav Brandt, formerly the rogue called Libra--and father to Mantis. (Dun dun DUNNN.)


Next, we rejoin Tony Stark, newly outed as a TRAITOR!, back on Chronopolis among Kang, Mantis, the Professor, Mary Ann and a host of Anachronauts. Kang reveals that their longtime enemy is ready to make his move, years ahead of schedule, and that they must secure this "temporal beachhead" so they can defeat him. (Hey, wait...what are years to time travelers?) Stark returns to Works HQ to find Amanda in the sub-basement. Chased by Stark, she finds freezer units, one of which is occupied by Suzi Endo, which begs the question: who is Cybermancer? That answer must wait until just before cancellation, as Stark coldly kills Amanda then activates Virgil's "Siege Perilous" protocol, synching up with a recently-launched satellite. War Machine flies to The Works while USAgent and Black Widow pursue on land. Meanwhile in Vietnam, Brandt reveals that when he died, the Priests of Pama saved his spirit and grafted it to the body of Moonraker, who in an alternate reality was a trusted member of Force Works. They sent him as a warning against Mantis to be activated when the time was right. When Moonraker crossed from the alternate reality of his creation to this one, his history, including his romantic relationship with Spider-Woman, crossed too. (Say huh?) He says Kang plans to reshape the Earth with his "chronographic powers" which, loosed on Vietnam, caused the young boy's metamorphosis from the last issue. Many will die, but those that mutate like the boy will fill Kang's Anachronaut ranks.

Back at The Works, Century, an alien member of the team, returns from a solo adventure as Rhodey arrives. As before, Stark tries to convince Century how "they've all turned against [him]," but he doesn't take the bait and saves Rachel and Rhodey from being blasted to bits. Century takes Rachel away, and Rhodey transforms into his new alien War Machine suit to take on Stark...and it's on like Donkey Kong. But with uglier art.


War Machine and Iron Man square off, and Stark is as fierce as Rhodey's ever seen him. Century discovers Amanda's corpse while fighting Cybermancer. He defeats the villainess handily, while Iron Man and War Machine punish each other. Rhodey can't deliver the killing blow because, well, there are still several parts left in the event. Stark lasers him, refraining from killing him (because there are three issues left in the series!) and flies away, while authorizing Virgil to use deadly force to defend itself from completing its duty to activate the Starcore satellite that will bombard the Earth with the same chronographic energies that affected Vietnam. War Machine heals, and after a meeting of the remaining members of the team, he, Scarlet Witch, Fisher Todd and USAgent remain at The Works to shut down the Siege Perilous protocol while Black Widow, Century, Moonraker, Spider-Woman and daughter teleport to rejoin the Avengers.

Stark returns to his secret arctic lair and repairs Machinesmith, whom Masque demolished during her escape. Meanwhile, Masque and the assembled members of Force Works and the Avengers compare revelations, and they communicate via telepresence with the remaining Force Works members who are facing Virgil. Masque alerts them to Stark's arctic bunker and a small team consisting of Crystal, Vision, Century and Moonraker teleports there. Marianne Rodgers is seemingly getting past Stark's emotional barriers at last when the team arrives, setting off the facility's alarms. Unable to penetrate the bunker's defenses, the team is contacted by Marianne, who tells them that Stark has been corrupted for years and that (wait for it...) there was a time when a younger Stark was free of that evil. They teleport back to the Avengers' temporary HQ but Moonraker is no longer with them, kidnapped in mid-journey by Kang and Mantis.


Back at The Works, Cybermancer and Virgil (revealed as a super-beefy computerized avatar of Stark...egotistical much?) conduct their attack on the remaining Force Works crew. Thanks to using some holographic images to weasel around some traps, and thanks to Plato, another of Stark's computer systems with allegiance to the team, they're able to abort the firing sequence to Kang's chronographic weapon. Everyone commences another round of uninspired bitching about Stark being a traitorous so-and-so. Can we move along now?


You bet we'll move along, but it's into space, where the chronographic weapon in Stark's satellite waits to be triggered on-site! Who can activate the weapon from space, you might ask? It's Dirge, one of Kang's mighty minions, wearing a suit of Warwear just like Rhodey. Also on the satellite is Skye, a woman Rhodey met while on vacation, who reveals that her cosmic-level employer foresaw "The Crossing" and wanted him to combat Stark. To that end, when Rhodey lost his regular War Machine armor, she led him to the Eidolon Warwear as a replacement. She expected him to kill Stark but obviously that didn't happen. Dirge delivers a fatal blow to Skye, who survives long enough to see Rhodey use more of the Warwear's abilities to defeat Dirge. His destiny and that of the Warwear are linked, she says, and that destiny lies....IN SPAAAAAAAACE! Ahem. And oh yeah, Rhodey destroys that pesky satellite. The end.

In the last stop before "TimeSlide," Kang and Mantis relentlessly torture Moonraker/Libra at Chronopolis. Older Luna frees him, but Malachi, Tobias, Neut and other Anachronauts bar her exit. She summons her "time-chair" and succeeds in crossing through time to the Avengers, demanding they help Moonraker. Masque knocks her unconscious even as Hercules remembers she was the one who tried to warn them about Stark at the very beginning. When she awakens in Pym's med-lab, Quicksilver and Crystal find her familiar, as do the others. There's no time to rest, however, as Kang's soldiers have followed Luna and Moonraker. Neut cleaves a path deep into the mansion singlehandedly, disemboweling the new Swordsman and knocking the rest of the team on their keisters. Luna throws herself between Neut's energy beam and her parents, taking the brunt of the blow and dying. Neut is ready to kill the team when the revivified, newly-mutated Wasp emerges from her cocoon and takes him down from behind. She's now more wasp than human, but other than that, Hank Pym declares her to be in "perfect physical health--better than [she's] ever been before!" Uh, yeah, but she still looks like a bug, genius!


As the team licks their wounds, Masque and Black Widow discuss their next move. They have a time portal in the basement, but they can't just go back and kill Tony Stark. Masque suggests the best way to stop a genius like Stark is with another genius. And thence begins the madness that leads to...Teen Tony!

Sorry it's taken so long to get to this point, peoples, but entry number three (the finale, honest!) will be en route soon enough. Who is Kang's mortal enemy? What more madness could Marvel wring out of Earth's mightiest heroes? Next time: Let's do the TimeSlide (again?)!