So, on the eve of another potential turkey in the making, it occurred to me, you guys don't know the secret story of how I first (and, for that matter, only) saw that hairball of a movie... 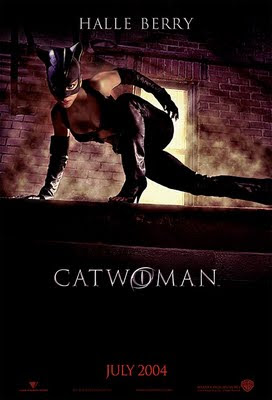 I don't remember what movie I bought to get that Movie Cash to see Catwoman, but get it I did. It had to have been something good, because I can't see buying a DVD just to get one ticket to see one lousy movie I likely wouldn't have seen otherwise. There was a theatre, not too far away from where I lived at the time, probably newly opened not long before, come to think of it. I do believe I went on opening night. And I almost didn't see it at all. Would you believe that?

It's true! The fates tried to steer me away and I stubbornly forged onward. Y'see, when I went to purchase a ticket for the movie, the girl selling the tickets gave me one for the wrong film. Maybe it was the latest Harry Potter. Like an idiot, I actually fussed and said I really wanted to see Catwoman. (Stop smirking!) If you came to the theatre and had a pass to see one crappy movie, but the theatre gods took pity on your poor soul and gave you a ticket for a completely different, highly-reviewed movie, you'd probably not have hesitated, not have refused. But yeah, I did. I'm a sucker.

When I got to the actual auditorium in the theatre, it was one of the smallest screens in the place, with probably only 60 or so seats in it. I sat a few rows up. It was one of those stadium-seating theatres. Soon, a duo of older women joined me in the theatre, sitting in the row behind me. The real terror then began when the lights dimmed and the projector ran. However bad I could have conceived it, the end result was worse. It started out as just boring but veered off into "unintentionally hilarious" territory.

Patience Philips gets murdered? Tee-hee. A cat breathes green fumes on her and gives her super-kitty powers? Bwa-ha-ha. Her boss gets skin like "living marble" because she's been using some funky skin cream for too long? Hee hee, ha ha, ho ho! I admit, I laughed hard enough that the women behind me had to shush me. Still, I kept up with the giggle-fits. And don't get me started on poor pretty boy Benjamin Bratt, unable to act his way out of a paper bag. Or maybe it was all just the limiting script. Y'know, that award-winning script. The Golden Raspberry winner for Worst Screenplay, just like the movie won other similar awards, for Worst Picture, Worst Actress, and Worst Director.

Worst DC film ever? I don't know. Unlike Marvel, who in my opinion has a few turkeys here and there, Catwoman has a lot of company. Superman III and IV. Batman & Robin. Jonah Hex. The Return of Swamp Thing. And, oh yes, we daren't forget Steel.

Are we ready for Green Lantern to join such illustrious company? Worse yet, are we ready to see the $200-million project deliver a black eye to DC's line of feature films, which have been, let's face it, pretty unspectacular aside from the majority of their Superman and Batman franchises? Comparatively, Marvel has had great success in bringing their characters to life on the silver screen. Can DC catch a break? I'm beginning (heh) to doubt it.