(I swear, my review for last week's Alpha Flight #1 is forthcoming!)

Let's see, what else is on the way? "Crossing" retrospective finale? Check. A blistering op/ed on DC Digital? That, too. A talk about why the Hulk had to change in the 1980s? You betcha. For now, here are three reviews for my adoring masses, due to popular demand. (You know who you are!) Where, you might ask, is my review for Skaar #4? My weekly comic shipment arrived without it, but it's apparently on the list for next week. Stay tuned, true believers! 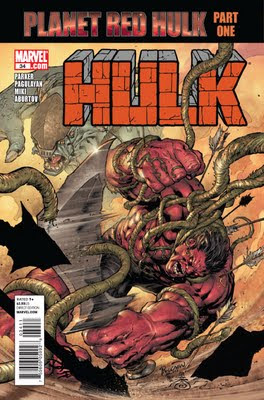 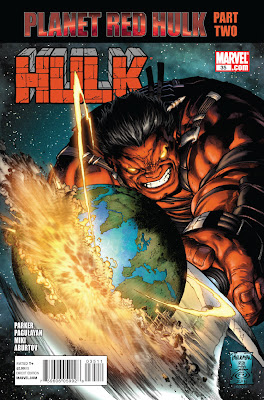 "Planet Red Hulk" is the name of the game in this two-part storyline. "Thunderbolt" Ross starts out trying to help some Russian cosmonauts on a mission in space, but finds himself swept through a wormhole and living an adventure eerily similar to the one the Hulk had a few short years ago, deposing an alien monarch and becoming an, erm, "Red King." All the while, he's left wondering who's really behind putting him in such a similar situation as Banner, even contributing the scenario to Banner himself, only to find the real culprit and their true rationale in the concluding chapter.

One can't help but feel the very theme of this storyline is a blatant cash grab by conjuring fans' pleasant memories of Greg Pak's monumental "Planet Hulk" storyline. The storyline is similar enough, and it also features beautiful artwork by "Planet Hulk" illustrator Carlo Pagulayan. Fortunately, of course, the storyline is only two parts and not fourteen, which makes the effort only slightly more palatable than the initial concept implies. Unfortunately, writer Jeff Parker can't maneuver the plot points in a way that truly elevates the material beyond a near-slavish homage.

When Parker and artist supreme Gabriel Hardman last teamed together (issue #33), the threats Red Hulk was facing appeared imminent, so it would take drastic means to divert the ongoing storyline's momentum. "Planet Red Hulk" and the upcoming "Fear Itself" tie-ins appear to stall all that momentum for the sake of gimmickry, pure and simple. Although Pagulayan's art here is revelatory, almost superior to Paul Pelletier's efforts on the competing Hulk book, the story is such a distraction that I long for Hardman's return and the return of the many ongoing plots that have been cooking since Parker came aboard. The rationale for the entire "Planet Red Hulk" journey just underscores the bad timing of such a diversion. 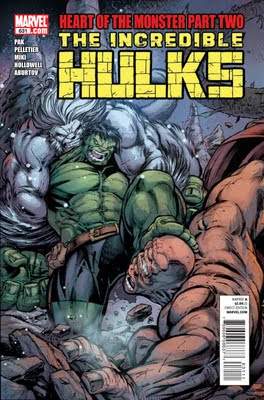 When writer Greg Pak brought in a mess of old Hulk villains at the end of the first part of "Heart of the Monster," his swan song on the series, I called it the one misstep in an otherwise solid start. This time out, Pak wisely wastes no time in breaking up the team of evil titans so that they might menace the Hulk and his family on a more one-on-one basis, roughly in the order they appear on the interlocking cover images of the next three issues. This issue centers on the immediate aftermath of last issue's cliffhanger, and then shifts focus to the spotlight battle between the Hulk and the unusual tag-team of the Bi-Beast and the Wendigo who, next to Tyrannus, are the Hulk's oldest foes to grace this narrative. (Interestingly, the order the bad guys appear on the covers roughly coincides with the order in which he met them in his long history. Coincidence?)

Now, the key mystery driving the final arc is "What was Betty's wish?" Amadeus Cho has an interesting theory about the wishes being made before he, the Hulk, and even the Wendigo have their various wishes brought to life in some fashion this time out. Bi-Beast acts credibly in-character, and Wendigo is...well, much the same Wendigo he's always been. The main fight is terrific in scope, mostly due to the Hulk's unfortunate wish. The story this time out was well-paced and kept moving at a freight train's pace right up to the end--another cliffhanger that will certainly prove to make the Hulk even angrier next issue.

As before, Paul Pelletier provides powerful penciling this time, and Danny Miki delineates to the best of his ability. Morry Hollowell, assisted by Jesus Aburtov, gives the resulting inked work a considerable, colorful flourish. If all parties can keep this up, "Heart of the Monster" may be the best-looking of all arcs since The Incredible Hulks began. Certainly it's proving to be a lot of fun seeing the Hulk and his family put through their paces during the last issue and this one. I'm enjoying the ride in spite of my initial misgivings. The Hulk is certainly making his share of awesome feats of strength and derring-do, and I expect those feats to only increase in remaining issues.

Face it, effendi, my quick verdict is that you should definitely Buy It!