Whither Nemesis?
(Lost Tales with the Avengers & UltraForce!)

It's been a few days since my last post. You know, there's only so much fanboy prattling about distribution problems or the End of Comics As We Know Them or bad movies like Catwoman and Green Lantern before you just want to scream! (Yes, I realize some of you out there actually like GL's feature film, which is why I won't belabor the point. I saw it Friday. Not impressed.) So, where does that leave us before we dive back in for the third and final entry of my "Crossing" retrospective, or the next big review post on Hulkish things, or the essay I've got brewing about the end of the Hulk's innocence in the 80s, or the one about DC Comics and Diamond Comics Distributors? 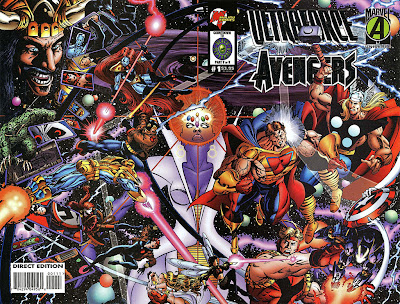 How about we look at one of my favorite unusual characters to come from the mid-1990s? Yeah, yeah--that era that made many people stop reading comics in droves, and the era that brought you not only "The Crossing" but also "Knightfall," "The Death of Superman," "Emerald Twilight," "Rise of the Midnight Sons," "Siege of Darkness," the Spider-Clone saga, and...well, you get the idea. Remember that briefly upon its inception, Image Comics was something of an imprint of California-based Malibu Comics, just long enough to get their feet wet in distribution channels? They left in 1993, but Malibu soon began their grand experiment in superhero comic books in the form of the Ultraverse, an often writer-driven line of titles. Their "brain trust" included writers Larry Niven, Gerard Jones, Len Strazewski, Steve Englehart, Mike W. Barr, James Hudnall, Steve Gerber, and more. The books had improved production values over many of Marvel and DC's books, and had an in-house coloring department that was second-to-none.

Fast forward a year and change, and the industry went belly-up, Malibu was canceling books left and right, and Marvel Comics set their sights on that shiny coloring department. Within a few months of veteran artist George Perez having been recruited to play with the Ultraverse "toys" on the Justice League-esque UltraForce series, Marvel Comics bought the distressed publisher and promptly set in motion a plan to merge the Ultraverse with their existing comics universe. And the Ultraverse characters trod down the long thorny road to..."Black September."

It all began with Thor--continued with Loki--and ended with the seventh Infinity Gem. 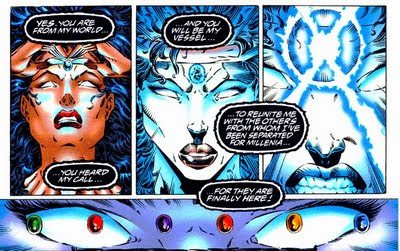 Yeah, I realize the last concept doesn't exactly follow hot on the heels of the first two. The rest of what happened in the interim won't make too much sense, either. The storyline (referred to as the "Ultraverse Spine") mainly concerns Loki falling through a rift between universes (established in the Godwheel miniseries) and seeking the six Infinity Gems that the Ultraverse's resident vampire, Rune, absconded with in the Rune/Silver Surfer one-shot. Heroes like Hardcase, Mantra, and the Night Man, as well as villains like Lord Pumpkin and Rune, encounter the various gems and come in contact with Loki, who'd always end up with whatever gem the narrative revolved around. (Although if anyone can find me the issue where Loki found the Space Gem, I'll gladly send you a No-Prize!) Meanwhile, Black Knight and Sersi of the Avengers emerge in the Ultraverse (after leaving the Marvel Universe in the wake of the Proctor debacle, in Avengers #375). While the Knight joins in with the UltraForce team, Sersi succumbs to her madness, and falls under the thrall of the heretofore-unknown seventh Infinity Gem, henceforth called Ego. (No relation to a certain Living Planet.)

The story of the Infinity Gems was well-known to anyone who'd followed Jim Starlin's "Infinity Trilogy" between 1991 and 1993. The gems were once a being who was, for want of a better word, God. The being committed suicide, and its essence was separated into six gems with the attributes of Soul, Power, Mind, Time, Space, and Reality. Several attempts had been made in recent years to bring those six gems together, as their wielder would have dominion over all the gems' attributes and, in effect, become a god himself. After Thanos' ill-fated Infinity Gauntlet affair, the Living Tribunal forbade the gems ever functioning as one in the Marvel-616 reality (a fact which recent writers seem to have forgotten...). With that ground rule in place, it made sense that if there were anywhere for the gems to again be used as one, it would be in another reality--the Ultraverse. There would be located the lost seventh gem, totally separated from the others for all these years. And since it had been isolated from the other six for millennia, you knew it had to be Trouble with a capital "T." 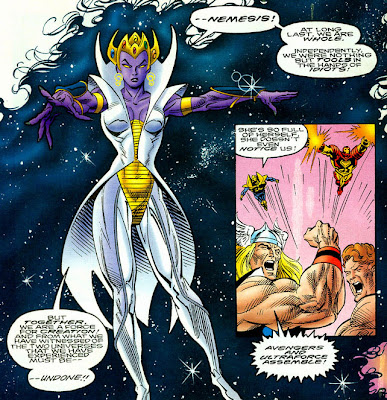 The blending of the Ultraverse and the Marvel Universe reached its apex in the five-part "Countdown to Black September" throughout UltraForce #8-10, UltraForce/Avengers Prelude and UltraForce/Avengers, with Marvel's own Avengers/UltraForce one-shot occurring between parts four and five. With the previous plot information already unspooled in the first four pieces, Avengers/UltraForce (by writer Glenn Herdling and artists Angel Medina & M.C. Wyman, hardly Marvel's A-list talent) begins with Marvel's Grandmaster on the trail of the missing gems, including the Mind Gem he'd previously possessed. Loki agrees to a game whereby if he loses, he will forfeit the Mind Gem, but if he wins, Grandmaster will disclose the location of Ego, the seventh gem. Grandmaster's pawns are the Avengers, and Loki's, UltraForce. Everyone fights everyone (except, ahem, Starfox and Contrary), but in the end Loki wins and Grandmaster summons Sersi, who possesses the Ego gem and divests the God of Mischief of the other six. The Ego gem casts Sersi loose and begins to incarnate before the assembled Avengers and UltraForce teams, re-forming that original being--that original god--Nemesis! And of course, the first thing she does upon reforming is see that the heroes' universes are flawed and usher forth her "creative energy" to wish them out of existence.

Speaking of A-list talent, the story continues in UltraForce/Avengers, by writer Warren Ellis and artist George Perez. Nemesis, the gestalt entity recreated in the union of all seven gems, recreates reality in a unique hybrid of the Marvel and Ultraverse universes. We get a couple of interesting ideas, from a Ghoul-Hulk amalgam; to Kevin Green (the Ultraverse's Prime) in the role of Rick Jones, head of the Teen Brigade; to Bob Campbell as Prototype to substitute for Iron Man; to Mantra taking the Thing's place in the Fantastic Four. Upon contact with Loki, the illusion of the new reality crumbles, and we see Marvel and Ultraverse heroes alongside their amalgamated counterparts. Nemesis is still creating, not on a blank canvas but right over top of not one but two universes. The assembled heroes engage her in battle, and the Black Knight somehow gets in close enough to split the gems from Nemesis' crown, causing a cataclysm that dispels the goddess and disperses the Infinity Gems throughout the Ultraverse. Marvel's heroes are shunted back to their own reality along with one of the two Night Men from the Ultraverse. The Black Knight remains in the Ultraverse while Sersi returns to the Marvel Universe. 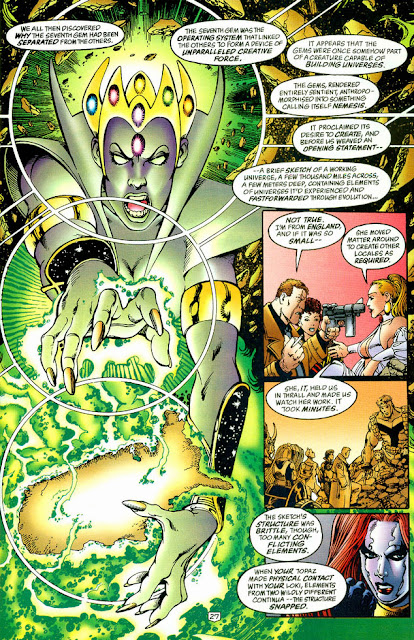 So, holy crap, Marvel ended up using UltraForce/Avengers as a Crisis on Infinite Earths-like event to reorganize the Ultraverse as they saw fit, with changes here and there to the characters' histories, many of which were never explained. And they used the "goddess of creation," Nemesis, to accomplish it! Now, this event wasn't Warren Ellis' strongest script, although it did have its moments. (Watch for the flying priest!) George Perez worked well with what Ellis gave him, coming up with dozens of designs for the amalgamated Marvel/Ultraverse characters based on Ellis' madcap ideas. Rumor has it that this project enticed Perez back into the fold at Marvel and led him to a second go-round with the Avengers alongside writer Kurt Busiek in 1997. So I guess this story ultimately did some good.

Whatever became of Nemesis? Although four of the Infinity Gems (Space, Power, Mind, Soul) were shown merged with Ego's essence and morphing into strange creatures in the Black September #∞ (Infinity) one-shot, the Soul Gem soon reappeared in Tom Lyle's 1998 Warlock miniseries, and all the gems returned in Jim Starlin's short-lived 2003 Thanos series, none the worse for wear. Marvel has played fast and loose with any associations between its universe and the Ultraverse in recent years, and Editor-in-Chief Joe Quesada has gone on record as saying they are unable to use the Ultraverse characters due to some undisclosed "dirty laundry" that is bigger even than the sweet deal Malibu established with the original creators. (Jim Starlin couldn't even use Rune's skeleton in one of his Thanos storylines.) 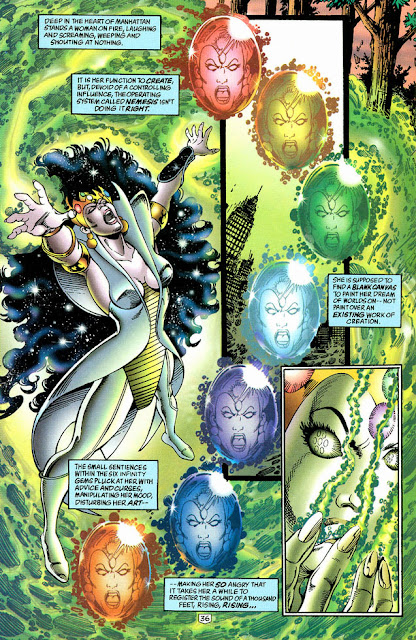 How beholden Nemesis and the Ego Gem--as well as the four gestalt 'gem creatures'--are to the Malibu deals remains unknown. However, it seems Marvel is willing to err on the side of caution, in which case it'll be a cold day in Hell before they again deign to use or even mention the characters/concepts in any ongoing storylines. That's a shame, honestly, because there are doubtless some good storylines for Ego/Nemesis still out there. (And oh, how it would've been interesting to see Starlin get ahold of her...!)