While I'm prepping some new articles of real industry relevance--a review of one of Gene Colan's seldom-seen works and an essay about the perils of too much continuity--I thought I'd shoot you a few quick reviews of books that came out last month. You'll also see a full review of the Spider-Man/Deadpool/Hulk crossover "Identity Wars" this week!

As previously indicated with my "Quick Reviews" segments, expect the below books to be rated Buy It, Read It, Skip It and Burn It. 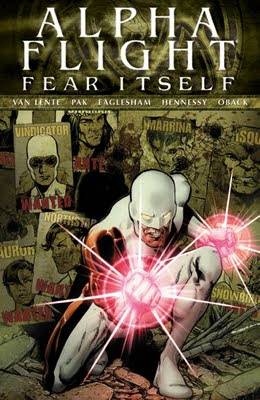 Last month,we saw the first effort of Herc co-writers Fred Van Lente and Greg Pak on Canada's premier super-team in Alpha Flight #0.1. That story (reviewed here) ably demonstrated their mastery of the team's history and powers. This story, "Pride of a Nation," wastes no time in upsetting the applecart, using an important foe from Alpha's past to bring forward a change in the status quo while at the same time making the saga fall in line with Marvel's summer "Fear Itself" event.

Attuma of Atlantis, who thanks to the aforementioned event has become Nerkkod, Breaker of Oceans, attacks Canada and Alpha Flight is there to fight him back. While it appears Attuma is everywhere during the event (he also is the main villain in Fear Itself: The Deep), his presence here makes sense to longtime Alpha Flight fans as he figured into a major storyline involving Marrina, a member that appears here. At the same time, the continuity is not so obtrusive as to take away from the story's momentum. Pak and Van Lente keep the pace brisk, using Attuma's attack to both further demonstrate the team's dynamics and set up the major conflict that will last through the remainder of the series, namely Prime Minister Cody's enaction of the Emergencies Act.

While the story is well told, building to a quite unforeseen conclusion that will require some explanation, it's in the art that the book shines. I've long enjoyed Dale Eaglesham's artwork, and he's in fine form here, right at home drawing characters from his native land of Canada. His depictions of all the main characters are spot-on, and I particularly enjoyed seeing his takes on Sasquatch and Marrina (the latter of whom has been gone far, far too long).

Overall, Alpha Flight is off to a fine start, and I can't wait for next month. I'm trying not to be overly enthusiastic, but the team really is hitting all the right notes from the start, and as a result, I strongly suggest you Buy It. 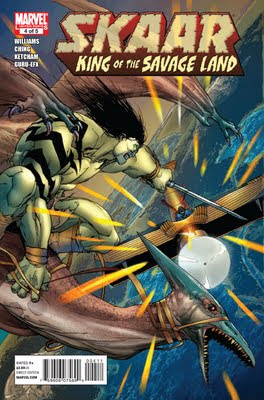 If I didn't know any better, I'd swear we were getting a Ka-Zar miniseries and not one featuring the son of the incredible Hulk here. In virtually every issue of the series so far, I've been of this opinion, and that hasn't changed here. In fact, the entire introduction here--the first six pages--are wholly devoted to Kevin Plunder the jungle lord, and much of the issue's ending involves his possessed wife, Shanna, and Ka-Zar himself, with Skaar only playing a bit part in the middle, when he discovers a secret, heretofore lost society alongside Ka-Zar's son Matthew, who often acts more maturely than the titular character. The other guest stars, including Devil Dinosaur, Moon Boy, Phantom Eagle and an older Kid Colt, are similarly relegated to bit-part status, sticking around only long enough for us to be reminded they're in the story at all. And with other guest-stars peppering the story and more apparently involved in next month's conclusion, I'm afraid Skaar will be crammed out of that tale as well.

Try as he might, writer Rob Williams can't write Skaar as anything more than a bit player in a drama that is all about Ka-Zar and the newfound problems in the Savage Land, and that's the series' biggest problem. The script is capable, but as stated before, this series has really been a Savage Land story guest starring numerous unrelated characters for shock value. The tale's sole saving grace has been Brian Ching's inspiring figure artwork, as he loves, and I do mean loves, to draw dinosaurs. Unfortunately, that means he skimps on backgrounds, with page after page having computer-colored/Photoshopped vistas that easily distract from the story being told.

If this series proves one thing, it's that Greg Pak's special touch allowed Skaar to prosper during the last two years, first in his own series and recently in Incredible Hulks. Without his vision, and surrounded by the overwhelming character of the Savage Land, he's just one more generic character in Marvel's tapestry of wild men. While this series started off on solid footing, it headed at increasing speed for a cliff, and now it's jumped off. Proceed at your own risk. Or, in words I thought I'd never have to say during a review, Burn It.