Hulk news roundup, kids! Somewhere in here, I'll even stuff in a review of Incredible Hulks #632 for good measure, because I love you guys so much. In order to give you the most news for your mouseclick, I'm experimenting with format. If you don't like my plethora of gobbledygook, you'll let me know and we'll be back to where we began the next time, yeah? (Can I get a "Hell yeah"?)

First, may I present the two covers to the October-shipping Hulk #42, one of which is by Patrick Zircher, and the variant by Greg Pak's former Incredible Hulk partner-in-crime, Ariel Olivetti, which itself conjures a comparison to...well, just you look! (Click for larger versions.) 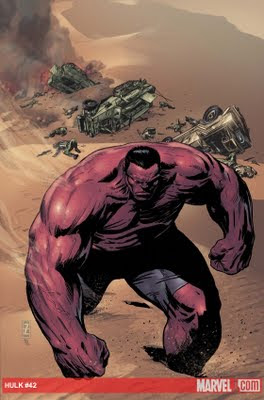 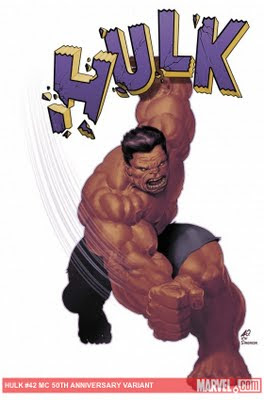 Olivetti's definitely giving us a Rulk-tastic homage to Walt Simonson's thrilling cover to The Mighty Thor #337. But a "50th Anniversary Variant"? Not the Hulk's anniversary, certainly--that isn't until next year. Might Marvel be pulling a fast one and celebrating the 50th anniversary of the Marvel Age of Comics that began with Fantastic Four #1 in November 1961? Seems logical. Wait and see! (Although it does strike me as strange that we'll be entering the Hulk's 50th anniversary year, 2012, with no Hulk book centered on Bruce Banner, unless solicitations change.)

Still, are we getting a hint as to Gabriel Hardman's Hulk successor with the main cover being by issue #36's superstar artist Zircher? Next week we'll have our answer, Hulk fans... 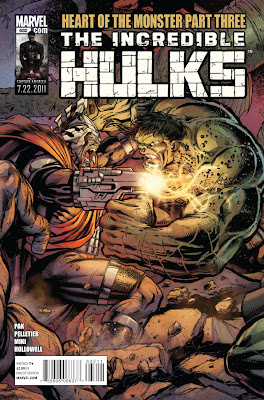 Picking up where they left off three weeks ago, Greg Pak & Paul Pelletier masterfully craft another entry in this final stage of The Incredible Hulks. Whereas last issue centered on two villains in the classic Hulk mold (i.e. baddies that love to punch and hit for pretty much no other reason than to do so), this issue reintroduces perhaps the biggest threat of Peter David's tenure short of the Maestro himself: Arm'Chedon, the alien warlord first known as Armageddon. Like Bi-Beast and Wendigo, he too has been summoned thanks to the wishing well at the center of "Heart of the Monster," and he provides the most direct focus on the Hulk's family to date.

Y'see, back in the mid-1990s, the Hulk killed his son, Troh-Maw, and Arm'Chedon pursued the green goliath for vengeance. He tried to use the Hulk's strength to resurrect Troh-Maw, but his power was too much and as soon as he lived again, he died again. Hence it makes dramatic sense for the villain to target the Hulk's own family in his quest for vengeance, and the results are, unsurprisingly, incredible.

How angry do Arm'Chedon's actions make the Hulk. Probably as angry as you're thinking, which brings all Pak's themes stretching back to World War Hulk into the narrative. This time, however, he has his family and friends to back him up, which ratchets up the tension. Seldom have the Hulk's struggles been so clear and so well-depicted. Thanks to Pak's grasp of the character, and the combination of Pelletier's brilliant artwork and Hollowell's verdant hues, I can safely say this is what the Hulk's all about.

Like the Hulk himself, Pak's finale gets stronger with every issue, after an already-impressive start. For twists, turns, and a taste of everything that's made the Hulk great over the last five decades, "Heart of the Monster" is where it's at. Miss it at your peril. Buy It!


Moving onward, some of you, my constant readers, have asked me to review Fear Itself; after all, the seven-issue limited series features the ever-lovin' Hulk as Nur, the Breaker of Worlds, wielder of one of the hammers that marks him as The Worthy. It's true that I have reviewed the first two issues, so why wouldn't I review the subsequent issues? 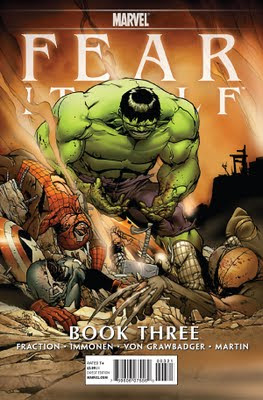 Maybe because it's not as much of a Hulk story as it seemed in the beginning? While we did get a few decent pages starring ol' greenskin in issue #3, the following story released last week featured him for all of four panels. (Okay, five, counting the preview page at the end.) No? How about I voice my ever-growing disenchantment with the limited series as not being an event that's easily digested by itself, like, say, the original Crisis On Infinite Earths or even Secret Wars II or The Infinity Gauntlet? Whereas event miniseries of earlier vintage could be read by themselves with all the vital parts contained therein (and you could read the crossovers to truly "enhance" the overall experience), series like Fear Itself and its DC Comics counterpart FlashPoint seem to mainly exist to drive the larger event throughout the comics' mainstream lines, with many important plot points seemingly dealt with only in crossovers in which I have painfully little interest (and even less cash to spend on).

Remember when I complained that nowhere in the main series was it shown how the Absorbing Man obtained his hammer? And how Attuma was never shown obtaining his? These are inexcusable lapses in storytelling that wouldn't have made it outside the planning stages if this were Jim Shooter's Marvel. And they're just the beginning. Writer Matt Fraction, who has been a decent writer in The Invincible Iron Man and especially alongside Ed Brubaker in The Immortal Iron Fist, only hints at large developments and then hastily refers readers to this issue or that issue where we'll find out what "really" happens when characters X and Y meet/talk/fightfightfight. At best it's an annoyance, and at worst it's just sloppy soap-opera writing (where you pause for dramatic effect and pick up later, leaving the resolution to said plot to the audience's imagination).

Mainly, Fear Itself is designed to function as the next big thing for Marvel's two movie titans of the summer, Captain America and Thor. It's an odd blend that never really gels due to the lack of basis in the histories of these characters leading up to this year. Heck, remember when several characters got the power of the Juggernaut a few years back ("The Eighth Day")? I guess that event wasn't big enough or remarkable enough, so Marvel's doing it again, this time with magical hammers like Thor. And they're giving characters nobody cares about these hammers just to throw a spotlight on them and show fans they haven't forgotten about them. And look! There's the Hulk! And the Thing! And yep, Juggernaut, too!

No psychological underpinnings in the main series. All action, action, action. No pathos. Tony Stark drinks again so he can make a deal with Odin? I can't be compelled to care.

Yes, I'm reading the main series, and I'm also picking up The Deep, Alpha Flight, Spider-Man, and whatever Hulk appearances are out there, including the forthcoming Hulk Vs. Dracula story. I'm also picking up the series I read anyway that just happen to have the crossover run through it. But I'm not going out of my way and picking up a lot of series to get the "full scope" of the event. I know better. Besides, my pocketbook would probably come to life and kill me if I did.


And that, my friends, leads us to the last set of bullet points on my slideshow. Following up on Wednesday's blog entry, where I assessed Red She-Hulk's involvement in an upcoming Marvel event that starts around Christmastime, this picture popped up on the 'nets today: 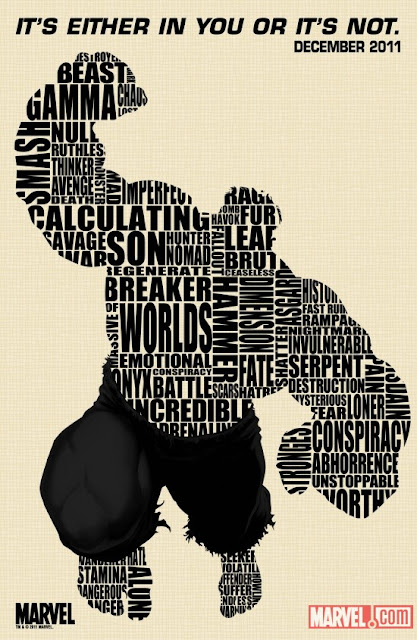 To date, we've seen five "It's either in you or it's not" teasers, and this one may be the most telling. One thing is sure: all of the images are not from new art, but instead culled from previous stories. (Iron Fist is from David Aja's cover to The Immortal Iron Fist #6; Dr. Strange, the second image, a riff of an old Paul Smith piece; Red She-Hulk, the third image, from Ed McGuinness art in Hulk #22; Silver Surfer, the fourth image, from Claudio Castellini's 90s work; and this one, from Frank Cho's cover to Dark Reign: The List - Hulk.)


What is the point of these teases? "It's either in you or it's not." Of all the words in the five images, what word occurs in almost every one? That's easy: "Defender." As in, the Defenders, the classic non-team originally comprised of Dr. Strange, the Sub-Mariner, the Hulk, and the Silver Surfer. Intriguingly, the only image in which the word "Defender" does not appear is the Hulk! His image contains the word "Offender" instead, which conjures memories of Jeph Loeb & Ed McGuinness' Defenders revival during the current Hulk series, in which the Red Hulk assembled a group of evildoers called, yup, the Offenders.

Is Marvel trying to make the Hulk go bad? It would make sense if the rumors we've heard about the "Avengers" movie were true, that the Hulk is being set up as the big bad guy for the film. But even that doesn't make sense. The Hulk, if anything, is Marvel's poster child for being misunderstood and engaging in fights with other heroes based on little to no provocation. Even World War Hulk featured a Hulk full of righteous indignation at the Illuminati who dared to exile him into space. Maybe they weren't directly responsible for the death of a million Sakaarians, but if they hadn't exiled him, none of what happened would ever have occurred. Even the few other times the Hulk might have been classified a "villain" in the mainstream 616 are few and far between, from his time in "Ghost of the Future" masquerading as the Maestro; to Apocalypse's selecting him to be his Horseman, War; to the actual Maestro; to today's Fear Itself event.

We might as well start asking now what happens at the end of Fear Itself to trigger a fight between a new team of Mighty Defenders and The Strongest One There Is.

And we better also start asking whether this is the Loeb/McGuinness super-project. (I'm hoping not.)

What the heck does "Onyx" have to do with the Hulk, anyway?