Welcome to another review jam session! Before we get back to my discussion of continuity vis-a-vis DC's Relaunch, I'm afraid I have to give my weekly round-up of all things Hulk! Don't get used to it, folks, for I'm going to be doing my level best to diversify in the days and weeks to come. (To see just how much I can diversify, check the earliest blog entries from 2005! Just scroll down and find the archives at right.) 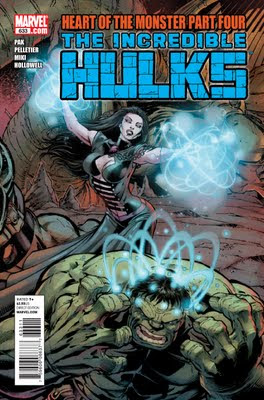 We're officially past the halfway point of Greg Pak's Incredible Hulks finale, "Heart of the Monster," so all of the varied pieces of the puzzle are starting to congeal. Of all the adversaries lined up in issue #630, only two haven't had their shots at ol' greenskin. From this issue's cover, you can see the villain this time is Doctor Strange's sometime enemy, the sinful sister to the Dread Dormammu himself, Umar the Unrelenting! And boy, does she have a history with ol' Hulky...

To those not in the know (and hey, who can blame you, since certain events occurred outside the Hulk's own book?), one of the last times the Defenders assembled to fight evil, they tried to halt a scheme whereby Dormammu and Umar conspired to defeat Eternity and remake the universe in their loathsome image. In the story--written by J.M. DeMatteis & Keith Giffen of Justice League International fame--the Hulk was--ahem--seduced by Umar. He lasted all of a few minutes before collapsing, and changed back to a more-mellow-than-usual Banner. Take from that what you will.

Thanks to the wishing well created by A.I.M. Scientist Supreme (and Banner's ex) Monica Rappaccini and appropriated by Banner's other ex, Red She-Hulk, Umar has returned to plague the Hulk. Or rather, it appears, to help him burn off all that Worldbreaker energy he's built up from seeing his friends poisoned by Arm'Chedon last issue. As result, the entire issue becomes less a focus on the Hulk--who's far too happy to care about anything else, too happy to even speak--and more a focus on Amadeus Cho and friends' efforts to track him down and put an end to this "wishing war" business posthaste.

So powerful is Pak's ongoing narrative that I didn't even realize Hulk's placement as a MacGuffin until my third read-through! He functions as an object of the plot, taken by Umar, sought by Cho and friends, and apparently wanted for death by the other villains of the piece. While it's not necessarily bad because, let's face it, the supporting cast is so well fleshed-out that you hardly notice, I still thought we were through with, for want of a better term, plot-device Hulk (TM).

Still, the book succeeds on the strength of the other characters in the story, as well as on the immaculate artwork by Paul Pelletier, who with inker Danny Miki and colorist Morry Hollowell shows no signs of letting up in this end run. The art tells the story, sells the story, and otherwise makes "Heart of the Monster" even more of a compulsive page-turner than it would be without his involvement. Over previous arcs, Pelletier has shown he belongs among the upper echelons of Hulk artists--perhaps not nearly in the same breath as the all-time greats like Keown, Trimpe and Buscema, but awful close.

Hampered by a story that for about the only time in Pak's tenure relegates the lead character to a thoughtless plot contrivance, this story should by rights earn a "Skip It" rating. However, buoyed by terrific artwork by Pelletier & co. and thoughtful characterization by Pak on the entire rest of the cast (including a guest appearance that makes total sense), I've got to bump up this story's rating. You've got to at least Read It. 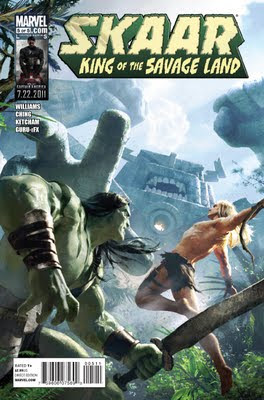 Thanks to a strong introduction by his creator, Greg Pak, Skaar blossomed from an eye-rolling, derivative idea into a legitimate character worthy of his father's heritage. It's unfortunate, then, that the first writer to seriously tackle Skaar outside his creator would misfire so badly as in Skaar: King of the Savage Land. In this finale, the storyline, which has thus far been a Ka-Zar riff guest-starring the green-skinned half-breed, degenerates into a morass of unparalleled depths and is, quite simply, the worst thing to come out of the Hulk's corner of the Marvel Universe since Bruce Jones made Betty into the enigmatic "Mr. Blue" and the Leader into a giant brain in a jar.

Am I being too harsh? I don't think so. Bizarrely, as much as this story is a Ka-Zar tale bundled up to fit under the Hulk banner, it's got elements that echo early Hulk stories. (Featuring Ka-Zar, of course.) Specifically, it's got elements designed to attract fans of sixties Hulk artist Herb Trimpe, including the cover with its obvious homage to 1969's Incredible Hulk #110, the villainy of Umbu the Unliving (as seen on the cover), and a non-sequitur of a guest appearance by someone who seems to be the Phantom Eagle, one of Trimpe's favorite creations from WWI. Add more, equally senseless appearances from prehistory's heroes Devil Dinosaur and Moon Boy, as well as western hero Kid Colt, then involve a wormhole that somehow sucked people in over the decades, and you have something more ridiculous. Finish the whole thing off with a blatant "look at me" cameo by Steve Rogers and the Avengers (including Red Hulk!), and the issue feels like everyone's throwing whatever they can at the wall and seeing what will stick. And from out of nowhere--spoiler warning--Skaar saves the day in two pages (by tossing a possessed guy off a cliff to his death!) and Ka-Zar sees fit to crown him new King of the Savage Land.

I hope I'm doing this book justice. And by doing justice, I mean telling you it's a nonsensical book with very few redeeming features. At the very least, Brian Ching's artwork is quite good here, and Guru-eFX keeps the Photoshopped pictures at a minimum this time out. Still, I can't excuse the weak villains, the poor pacing, the limited involvement of the lead character, and the out-of-nowhere conclusion. Truthfully, it may have been a stronger story if Williams had been able to plot it as exclusively a Ka-Zar adventure, as there's really no place for Skaar here. (And that's sad, as from Pak's "Planet Savage" I'd have thought the Savage Land the perfect place for him. I was wrong! I was wrong!)

Please, just Burn It and read this instead: 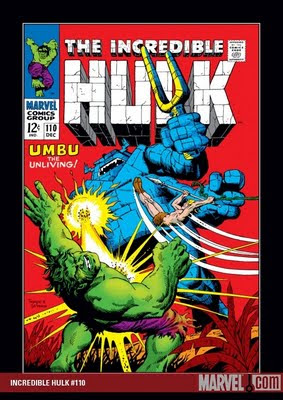