(Now heavily updated with links to more "Defenders" info & some added detail on both series!)

In a fit of "breaking news" from San Diego Comic-Con 2011, it's now been officially announced that writer Jason Aaron (Wolverine, Punisher MAX, Scalped) and artist Marc Silvestri (X-Men, Cyberforce) have teamed for the brand-new, relaunched Incredible Hulk series that begins in October. The series spins out of both the conclusions of Greg Pak's Incredible Hulks finale, "Heart of the Monster," and Matt Fraction & Stuart Immonen's Fear Itself, which saw the green-skinned rampager as wielder of one of the hammers of The Worthy and re-designated Nul, Breaker of Worlds.

Please, if you don't want to be spoiled with thoughts of the new status quo, I direct you to look elsewhere, because this post will be filled with 'em. Caveat emptor!


Here's one of the first covers by Silvestri: 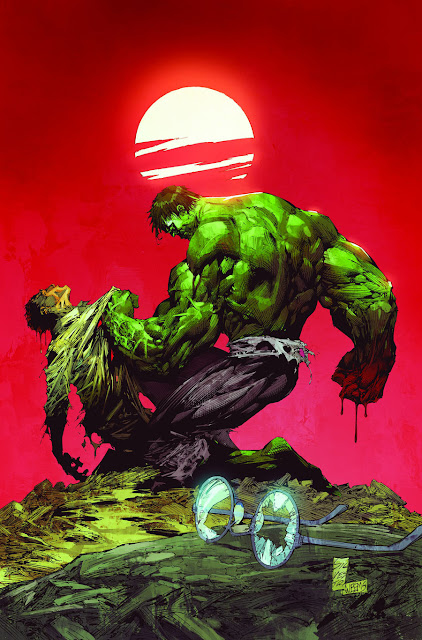 You're really not seeing things here. In an interview released at Newsarama today, Aaron confirmed that due to unknown circumstances, the Hulk and Banner have again been split into separate beings at the start of his series. It has happened four times before--back in the early seventies thanks to Raoul Stoddard's Gammatron (Incredible Hulk #130-131), again in the eighties when Banner became Captain Universe (Hulk Annual #10) and when Hulk was immersed in Doc Samson's nutrient bath (Incredible Hulk #315-323), and still again when the Marvel heroes fought Onslaught (Onslaught: Marvel Universe), so it remains to be seen just how different the separation will be this time around.

Aaron appears to hint that the Hulk, not Banner, is the hero of this story, and that his tale leads to "the biggest, craziest throwdown in Marvel history" during his second arc. These ideas would appear to follow directly from Greg Pak's tenure and specifically the period where Banner was briefly cured of being the green goliath. If you remember in Incredible Hulk #603, Banner posited that the real reason the Hulk was born was to protect the world from his own very dangerous intellect. It looks as though Aaron is ready to fully capitalize on Pak's groundwork from the last five years, which in concept makes me a happy Hulk fan.


The first arc, "Hulk Asunder," apparently begins with Banner and Hulk already split. We don't know how, but it's hinted that neither the end of "Heart of the Monster" nor Fear Itself actually shows the split--it's all yet to be revealed over the course of several arcs in Incredible Hulk. At the beginning, the Hulk is the leader of all the creatures on the Mole Man's Monster Isle, and Banner is, well, a little mad. At least Aaron admits that events always serve to reunite the two, so we'll eventually again have a united Hulk/Banner, in one corporeal form if not of one mind (because where's the fun in that?).

I'll say this: a physically separated Banner and Hulk is a logical step in light of the iterations of the characters we've seen in recent memory. We've seen the different personalities--savage, Fixit, and the more contemporary Green Scar/"Gravage"--over the last few years thanks to Pak and Jeph Loeb. We've seen Hulk for prolonged periods without Banner, and Banner for prolonged periods without the Hulk. What we're about to see is a matured--relatively speaking--Hulk, "on-camera" with a Banner who has grown considerably in recent years and who opts to use his incredible intellect in ways he hasn't in far too long.

That said, I certainly hope that we don't see a repeat of John Byrne's tenure, with Banner assembling a new group of Hulkbusters chasing after ol' greenskin. At the very least, Byrne's planned Act-One finish would seem to be off the table as a conclusion to this storyline.

Aaron cites years of Hulk stories as inspiration, ranging from the TV series, to the stories of Byrne, Peter David, Greg Pak, and a surprising choice: Bruce Jones. Jones is especially reviled around much of Hulk fandom for his overlong conspiracy arc and his decompressed storytelling style that left the big green guy out of the series for issues at a time. However, he's a guilty pleasure to me, and Aaron has a point about Jones "[making] the Hulk a monster again," and if that run hooked him in anew, then maybe it led to his keeping in touch during Greg Pak's magnificent run. 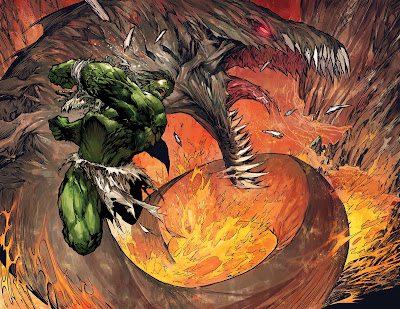 On the art front, it's certainly interesting to note that Marc Silvestri, the head of Top Cow, a leading imprint at Image Comics, is the only announced artist. While he's made a name for himself over there, he has contributed to a select few one-shots and specials for Marvel over the last few years. This series marks his first regular monthly work since the Hunter/Killer limited series in 2005-2006, and his first regular work at Marvel since his work on the four-part "Here Comes Tomorrow" story in Grant Morrison's New X-Men. (And if you don't, it's his first regular monthly work since the eighties' Uncanny X-Men!) His work has been seen on the Hulk only once before, on the variant cover to Darkness/Hulk from 2004.

Upon seeing his preview pages, it's obvious that both Aaron and Silvestri have been heavily influenced by Greg Pak's "Planet Hulk" series, with giant monsters and strange landscapes, so that can hardly be a bad thing.

Keep in mind this is only the second-ever Incredible Hulk #1 (the other relaunches have both been adjectiveless). And we still have never had an Incredible Hulk #7, 8, 9, 10 or 11. So there's your fun fact for the day. And if you're not already sold on this project, well, courtesy some images from the panel, take a look at the return of a rather classic logo for green-genes:


Word has it the variant covers for Incredible Hulk #1 are by Dale Keown and Neal Adams. Look for more news as it becomes available both on this very site and out there on the greater internets.


Also of note is the following image, which confirms the existence of a new Defenders series, spinning out of the end of Fear Itself: 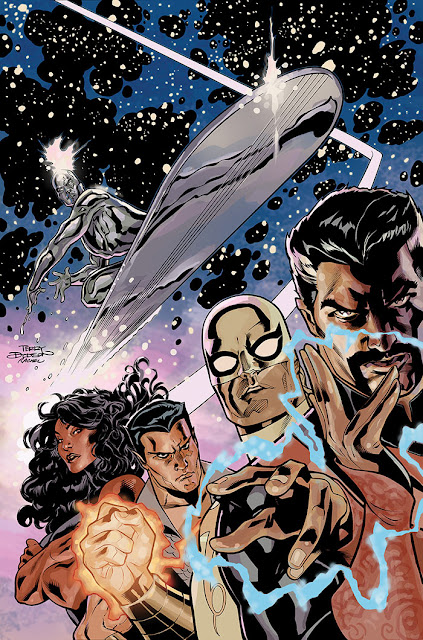 The series will be written by Fear Itself's very own Matt Fraction and drawn by the husband-and-wife team of Terry & Rachel Dodson. From the above image, we can see that in addition to the previously-hinted members (Doctor Strange, Iron Fist, Silver Surfer and Red She-Hulk), Namor the Sub-Mariner will also be among the group, conjuring still more echoes of the original seventies non-team.

According to a CBR interview with writer Matt Fraction, the series will be developed "Marvel-style," which is plot-first, then pencils, then script. Fraction also intends to bring in other characters than are on the first issue's cover, and describes the series as superheroes meet The X-Files meets Fringe, with storylines evoking Steve Ditko's Doctor Strange epics and Jim Starlin's Warlock series at turns. As one who's enjoyed some of Fraction's work (including The Immortal Iron Fist co-written with Captain America scribe Ed Brubaker) and frowned upon other titles in his oeuvre (Thor and much of Fear Itself), I'm obviously hoping for more of the style he used in the former, and less of the latter. With the Hulk sending the heroes on their first mission (again, see that interview) they've hooked me through the first arc, at least. Time to start another longbox of Defenders...

Not much more is known about the new Defenders team, except that the villain of the first arc will be the "Ebon Hulk." Whether this appellation refers to the Dark Hulk who appeared during a previous Defenders reunion in Incredible Hulk #370-371 or a wholly new creature remains unknown. We'll see the answer to that question, and many more, in months to come.