I haven't done one of these movie reviews in a good, long time on this site. In fact, the last time was when I saw 2008's Incredible Hulk from Marvel Studios! In coming weeks I'm going to try and serve up some more reviews, whether of superhero films or other genres (hint: I love Hammer Films!). For now, here's what I thought of...well, you see it in the title of this post, don't you?

Captain America: The First Avenger
Directed by Joe Johnston
Starring Chris Evans, Tommy Lee Jones, Hugo Weaving, Hayley Atwell, et al.
Screenplay by Christopher Markus & Stephen McFeely
Produced by Marvel Studios, Distributed by Paramount Pictures
Captain America has had a long and rocky road to the silver screen, starting with an early serialized feature produced by Republic Pictures in the forties and continuing through a duet of less-than-stellar made-for-TV features in the seventies (one of which, heaven help him, starred Christopher Lee). A low-budget feature film released in 1991 got the most details right out of all previous adapations, but still was hampered by pedestrian direction and acting, and featured the Red Skull as an Italian fascist and not a Nazi. (Cue jokes about his head looking like a big ol' tomato.)

Hence, when Marvel Studios announced plans in 2008 to produce a new film version, fans hoped they would at last see a fully-realized version of the character. After the successful translations of 2008's Iron Man and The Incredible Hulk by the new studio, it seemed that dream was within reach. Adding weight to the dream was Marvel's announcement the story would almost entirely take place during World War II and feature a Red Skull character largely true to the comics. Bucky would appear. The Howling Commandos, a ragtag group of soldiers with whom Cap sometimes cavorted, would appear.

The story of Captain America: The First Avenger begins in the present, where a team (presumed to be S.H.I.E.L.D., represented by Agent Coulson and Nick Fury in previous films) happens upon the remains of a large ship in the Arctic. When they find the familiar red-white-and-blue shield belonging to the Captain himself, we flash back to New York in 1942 where Steve Rogers (a digitally-scrawny Chris Evans) tries repeatedly to be drafted to war. We see the familiar touches--he's classified "4-F"--before he's recruited by Professor Abraham Erskine (Stanley Tucci) to be one of a group of candidates to train at Camp Lehigh under Colonel Chester Phillips (Tommy Lee Jones). Eventually, of course, he's selected to take the Super-Soldier serum, and next thing you know, he's a living legend.

Wisely, the script takes us through a journey whereby Steve Rogers must prove himself worthy of being such a symbol. Interestingly, the concept of Captain America takes a path unseen in the comics world, but which is totally fitting. It was unlikely that the army of the time would take quickly to such a costumed character, so the novel addition to the origin made here makes considerable sense. The moment where we finally see the fully-suited-up Captain America is well-earned and worth the ample screen time shown in getting him there.

The supporting cast built up around Evans as Captain America more than pulls their weight. I'd expect no less of Jones as Col. Phillips, but the rest are just as solid. Sebastian Stan plays a solid companion in Bucky Barnes, and Hayley Atwell is a sensation as Peggy Carter, a throwback to the leading women of the forties. Neal McDonough heads up the remainder of Cap's war crew as Timothy "Dum Dum" Dugan, and does the role justice.

Of course, a hero is only as good as the villain of the piece is evil, and Hugo Weaving is the perfect choice to bring Johann Schmidt, the real, German Red Skull to life. Redefined slightly as the head of HYDRA, the Nazis' science division, Schmidt schemes to use the stolen power of an object known as the Tesseract (which Marvel fans will recognize as something else) to win the war for himself and his followers. At first, I wasn't sold on the Skull being a HYDRA agent, seeing it as another subterfuge for hiding the character's Nazi roots, but I do understand the film must play overseas, and Nazi paraphernalia would certainly hamper that aim. Besides, the swastika does appear briefly, but never completely, to bridge the group's connections. Wisely, Schmidt is assisted by another name fans will recognize: Arnim Zola (Toby Jones), a biochemist with close Nazi ties.

Director Johnston, who previously helmed the period comic book drama The Rocketeer, ably gives us a picture that is as much a war movie as it is about superheroes. Everyone is about as on-point as I could have asked for, and every minor change in the characters is in service to the tale being told, never out of place. The story feels organic in spite of the fact we know where and when it must end. It's a dramatic finish, certainly, involving our main hero and villain just as it should. The ending is heartfelt, bittersweet at turns, and fully establishes what comes next, and one can see all kinds of plot nuggets for next summer's Avengers film as well as the inevitable Captain America sequel.

Overall, Captain America: The First Avenger has a wealth of elements lifted directly from the comics, whipped together to tell a compelling origin story full of rich characters and situations. It's got something for everyone, including a few choice easter eggs that had me smiling. (Watch for the surprising appearance in the Stark Expo at the beginning.) Without question, it's the best of this year's four summer superhero blockbusters, and it may even rival Iron Man for the best film to come from the young Marvel Studios. With action, romance, and an old time sensibility that recalls Raiders of the Lost Ark and more, Captain America is a sure bet for fun this summer.

(And the ending...well, unless you've lived under a rock these last few weeks, you should know to stay after the credits. You won't be sorry. Just...try not to cream your jeans.) 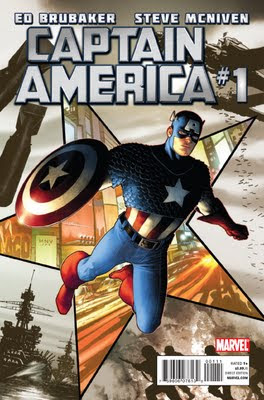 CAPTAIN AMERICA #1 - Marvel Comics, $3.99
By Ed Brubaker & Steve McNiven
For the second time in seven years, Ed Brubaker helms the launch of a new Captain America series, and just as he did the last time, he does it in style. Apparently picking up shortly after the finale of Fear Itself, "American Dreamers" begins with the funeral of one of Captain America's closest friends from the forties. It's a terrific entry point into Cap's life, and Brubaker takes full advantage of being able to tell just enough of the hero's "man out of time" origins to bring in any new readers that might pick up this book after seeing the movie.

In past projects, Brubaker has had terrific success in bringing A-name artists to his productions, and this one's no different. Steve McNiven, previously known for the Civil War event series, joins the ranks of distinguished talent like Steve Epting, Sean Phillips, Butch Guice and Mike Deodato Jr., providing a dynamic take on the characters in Brubaker's bailiwick while Justin Ponsor colors every scene brightly. Cap and his friends seem to burst off each page, and one can't help but be drawn in.

The plot involves the beginnings of a conspiracy meant, it seems, to bring Cap down--a classic revenge scheme involving players stretching back through the character's storied history. Brubaker sets the stage well, giving readers all they need to know without filling in recent, unnecessary backstory about Bucky and the fates of all concerned in Fear Itself, forging boldly onward. If you're looking for a Cap fix but don't want to have to deal with a major Marvel crossover, the newly relaunched Captain America is for you. At least, do yourself a favor and Read It. 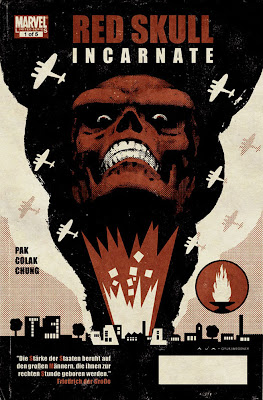 For years, the Red Skull's history has been something of an enigma. The popular story involves the Fuehrer himself, Adolf Hitler, proudly proclaiming he could turn any man into a symbol of ultimate evil. To that end, he selected a mere bellboy and groomed him to become the Red Skull, a foremost symbol of terror for the Third Reich.

The real story is, of course, more complicated than that, and here writer Greg Pak and artist Mirko Colak begin to unfurl their definitive version of the events that led young Johann Schmidt down the path of treachery that made him don a scarlet death-mask. As others have pointed out, Pak's having previously written the origin of Magneto, itself steeped in Holocaust lore, make him the ideal choice to tell the tale of the character who may well be Magneto's true opposite.

Like Magneto's origin, Pak begins the story of the Red Skull as early as he can, with this issue revealing Schmidt's early years in a home for wayward boys, escalating through his first exposure to the Nazi party in 1923, and finally climaxing in his first showing of brutal violence upon another creature. It's vivid, it's disturbing, and I couldn't put the book down.

The allure of this issue had just as much to do with Pak as it did with Serbian artist Mirko Colak, who sets the right tone from page to page. He's an excellent storyteller who doesn't need words to bring his point across. although this project marks his first work at Marvel, I'm betting this isn't the last we'll see from him.

The Red Skull takes his first steps toward the evil of the Third Reich in this story. It's already brilliant work, and it's only going to get better. Buy It or be sorry!