Picking Up the Slack: Ruminations on Red She-Hulk

Yes, yes, I've been taking a bit of a break from posting. Blame it on family obligations, blame it on house hunting--just know that I'm back, and I'll be posting some fun stuff over the next few weeks. This particular nugget couldn't wait. I'm sure you've all seen the following illo making the rounds on the comics news sites on Wednesday, hyping Marvel's December series/event/launch/whatever. (Fair warning: here there be SPOILERS. Avast, ye mateys!) 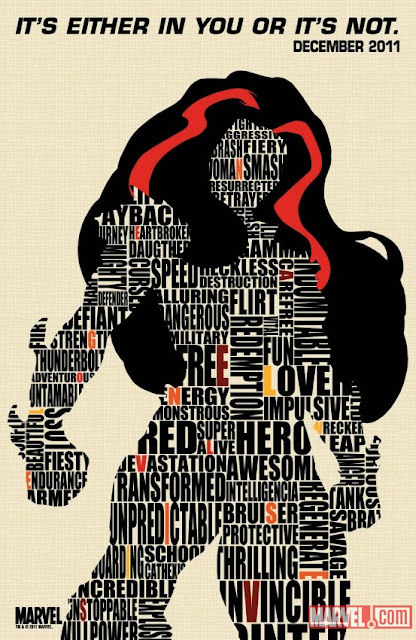 Marvel has been releasing these promos every day this week, with the first character obviously being Iron Fist (one of my favorite characters--Matt Fraction and Ed Brubaker's run being brilliant, and Duane Swierczynski's not lagging too far behind, even though I'm a sucker for Chris Claremont, Mary Jo Duffy and Christopher Priest/Jim Owsley). The second character was indubitably Doctor Strange (who's yet another of my favorite characters, from the Lee/Ditko days on through the Thomas/Colan/Palmer heyday, Englehart/Brunner, Roger Stern and just about everyone, on and on through today).

And now, they throw in Betty Ross.

On the quality of the characters involved in this thing alone, I'm hooked. Maybe Bendis writing the project would leave me apprehensive, but I hear the San Diego Comic-Con panel where we'll get some revelations about just what "The Mighty" is will involve Incredible Hulks writer emeritus Greg Pak and FF scribe Jonathan Hickman, so I'm hoping at least one of the two will be involved to a significant degree. Could be wrong.

One thing is certain: I think Marvel is proving, beyond a shadow of a doubt, the timeline between the current "Heart of the Monster" arc in Incredible Hulks and the concurrently-running event series, Fear Itself. "Heart" runs first, and then Bruce and Betty go onward into the event where Hulk is now traipsing around as Nul, Breaker of Worlds. This version of events lends credence to Marvel Senior VP of Publishing Tom Brevoort's recently revelation that the September-shipping Fear Itself: Hulk Vs. Dracula limited series was originally to have been Incredible Hulk #636-638 before the publishing plan changed. If we're seeing Betty as Red She-Hulk in promotional materials for product dated December, then obviously she can appear as Red She-Hulk in Fear Itself if it takes place following the end of Greg Pak's tenure.

I'm with Greg Pak, who in a recent Comic Book Resources interview stated the appeal of Betty as a She-Hulk character: "Of all the characters in the Hulk's orbit, Betty is the one who has probably eaten the most anger over the years. She's the one with the most repressed rage because she's had to deal with these men in her life that all have these ludicrous anger issues: Bruce Banner, Glen Talbot, her father Thunderbolt Ross. These are not men with a great deal of impulse control. She's been put into this role of being this mediating presence in their lives. That will eat at you. It made perfect emotional sense to me that Betty, once she got the chance to finally bust out, was going to bust out big. So now we're left with the ultimate questions is the true Betty Red She-Hulk? Is this really who she he is now? And was this nice girl the front?" That's about as solid a summary as any I've seen, and it works, it really works.

So, now you know--Betty's going to join this new group called "The Mighty" that's going to form near the end of Fear Itself, and as result she'll either get her own series, or be in a new miniseries or some other spinoff event come December. Meanwhile, there's no green-skinned Hulk in sight, folks.

Interestingly, the fate of Red Hulk is also in doubt. In the "may be nothing, may be something" department, Gabriel Hardman has confirmed via Twitter that issue #41 is his last issue of Hulk. Whether this event merely suggests an artistic change or a radical change in the status quo, nobody knows, and nobody's really talking. I suppose, however, we'll see in a week or so when Marvel's October solicitations become available. It's a shame, in any event, that Marvel's intent on breaking up the Jeff Parker/Gabriel Hardman team supreme when they've done such a bang-up job with the red-skinned rampager this last year. You really have to admit, however, that the new twice-a-month schedule on Hulk has to really hurt. There isn't an artist in the world that fast...well, unless you count Jack Kirby and Sal Buscema's output from the sixties and seventies. Godspeed in your new gig, whatever it may be, Gabe--even if it is Manhunter 2070.

Have I covered all the news that's fit to print? Let me know what you want to see here! (Also, for those of you wishing to join me over on Google+, click the link: http://gplus.to/garymiller!)