Two young girls go frolicking in the forest, but when one goes to get some flowers to braid in the other's hair, a stranger approaches. Hypnotized, the blond girl drops her mirror and takes to the hooded figure like a long-lost friend. When the other girl returns, she stands transfixed in terror. The town doctor rides along on his horse and spots the two of them. Coming closer, he realizes the blond girl is now old--prematurely old! Who could have done this? Moreover, how and why?

If that dramatic introduction doesn't entice you to read on, then I'm plumb out of reasons for you to continue. This entry is the first in what I hope to make a regular series. Since today is named after the Norse God of Thunder, and the God of Thunder has a hammer, I thought, what better day to throw emphasis on films from my favorite horror studio? I have to dedicate this opening salvo to British artist and fellow Hammer aficionado Simon Williams, who told me he'd never seen the film in question. Well, get ready, Simon: here's Captain Kronos, Vampire Hunter!

Written and directed by Avengers alum Brian Clemens in the waning days of Hammer Films' original era, Captain Kronos tells the story of a pot-smoking, sword-slinging former army man (Horst Janson, dubbed by Julian Holloway) turned hunter of the undead. He travels the countryside with his trusty sidekick, the hunchbacked Professor Hieronymus Grost (John Cater), a man knowledgeable of all things supernatural. As the picture opens, they pick up the beautiful gypsy Carla (Caroline Munro, among the best of Hammer's late-era leading lasses) en route to the village where Kronos' friend Dr. Marcus (John Carson) has summoned them.

Marcus and Kronos renew acquaintances, and the doctor informs his friend and Grost about the village's problems, which Grost wastes no time in proclaiming the work of vampires. Therein is the first hint that something's different about this film from the rest of Hammer's oeuvre. "You see, Doctor," explains Grost, "there are as many species of vampire as there are beasts of prey. Their methods and their motive for attack can vary in a hundred different ways." Methods of their demise differ, too: "Some can only be destroyed by hanging or decapitation, or fire or water, or by other means." Hence, the vampire film is recast as mystery--not only of the vampire's true identity, but also of their weaknesses. It's a novel idea that, even today, remains not wholly explored.

The film vividly entreats us to visit this village not through the eyes of the vampire, as do the studio's series of Dracula films starring Christopher Lee and the Karnstein Trilogy of more recent vintage, but instead through the eyes of the vampire hunters. In particular, the entry point into Kronos' universe is clearly the raven-tressed Carla, who over the course of the narrative becomes the hero's lover. Munro, just 24 at the time of filming, oozed sex appeal in every scene she was in, to the point one wonders who could resist her charms! Carson's Dr. Marcus also provided the questions that Kronos and Grost could answer about vampirism, with he in turn providing them information about the village and its denizens. He pays the price for his own investigations, but he doesn't look quite so delicious as Munro when doing so.

Once explanations are granted, the story really gets moving, with more grisly deaths due to old age, with bosomy young victims reduced to made-up old hags. This is a Hammer Film, after all! In the middle of the action Clemens introduces Shane Briant (then groomed to be "the next Peter Cushing") and Lois Daine as Paul and Sara Durward, son and daughter of a family whose deceased patriarch, Hagen, was "The Greatest Swordsman of His Time" according to his gravestone. (Pretty nifty to throw that into a film about a swashbuckling vampire hunter, no?) Their mother, Lady Durward (Wanda Ventham), is apparently in ill health and seldom interacts with any outside her kin. Could those kin be keeping a secret...?

Clemens admirably texturizes the film, with Grost's unusual tests that prove a vampire is in their midst as well as Kronos' bedroom confessions of why he began hunting. The film's inarguable centerpiece is a remarkable, deliciously campy sequence in which Marcus discovers that he has become one of the life-sucking vampires Kronos seeks. Kronos subdues his friend and then he and Grost elaborately try to kill him. They impale him with a wooden stake. They tie a noose around his neck and hang him. They threaten to set him on fire. Isn't this fun?

Eventually, of course, they find out how to kill him (and it suddenly all makes sense why the hero is good with swords). With one mystery solved at last, Kronos sets off to find the master vampire, whom he suspects has a connection with the Durwards. Simply put, the connection isn't quite what any of the characters believed, and the revelation of the vampires behind it all leads to an epic (by Hammer standards) swordfight between Kronos and the main antagonist. At the end, the good Captain triumphs, kisses his girl Friday farewell, and rides off with Grost in tow toward another thrilling adventure.

Captain Kronos, Vampire Hunter is one of my very favorite films from Hammer, owing to its unique treatment of the vampire legend. I first saw the feature many years ago, on the USA Network, and loved it immediately. It's truly unique among the vampire subgenre. I mean, swashbuckling vampires? I could just see the further adventures of Kronos and Grost, traveling to new villages where altogether different breeds of vampires existed. It's too bad the planned trilogy of features never happened! I hear, too, that Kronos briefly headlined a British comic strip, but that rights issues prevented its publication beyond the first few stories. Perhaps the new Hammer might venture once more into the macabre realm of Kronos, doing battle with all manner of creatures of the night? 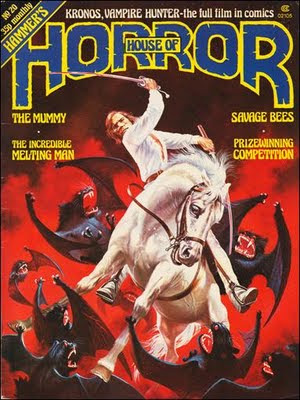 I'd love your thoughts on this new feature! Your suggestions for future Hammer Films to be spotlighted would also be horrendously (ahem) appreciated. delusionalhonesty [at] gmail[dot] com.

Captain Kronos, Vampire Hunter is available on Region 1 DVD from Paramount/CBS, and will soon be available again on Region 2 DVD from Icon Home Entertainment (September 12).