Taking the Good with the Meh: Incredible Hulks #634, Fear Itself #5 Reviews

I usually wait a few days to review books. While one of my reviews here is--let's face it--more than a few weeks late, it figures into the outcome of another of the books I'm reviewing that was only released today (or, if you're on the East Coast, then it'll be yesterday by the time I post). Shall we dive right in? 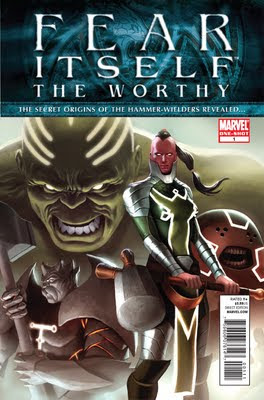 Certainly, I could say more about this issue, which features seven five-age stories each centered on one of the seven members of "The Worthy," possessed of mystical hammers granted them by Fear Itself's "big bad," The Serpent. Of the seven featured characters, only three regularly appear in a monthly book, and only one has a title all to himself. As all such books cobbled together from online mini-comics are, this one's a mixed bag. (On the plus side, Martin Jr.'s colors on the Titania story make Clayton Henry's art look the best it ever has!) Although I really should comment on all the stories, the only one that deserves full mention is the one that stands out because of its creative team alone.

Greg Pak and Lee Weeks have crafted a story in just four pages that cuts to the heart of the Hulk character, and provides an interesting take that mirrors what Pak has been doing in his final arc, "Heart of the Monster." "By Design..." recaps Green Genes' origin in the words of the man-monster himself, and marks one of the precious few instances of such a retelling. It's not Pak's first time retelling pieces of the puzzle, and at first glance, the writer appears to contradict himself from Incredible Hulk #94 In that story, he told the Warbound that Banner intended the gamma bomb to kill him, but that it only succeeded in making him stronger. By contrast, here the Hulk concludes that Banner used the G-Bomb to give birth to his own dark side incarnate so he had someone to blame/hate for his own failures. The Hulk is Banner's way of dismissing the guilt over killing his own father, and over not being able to save his mother from his father's wrath. He sublimates his self-hatred into the hatred of a being everyone can hate. That's a tortured psychology at its finest.

It's simple. It's brilliant. Yes, Frank Martin Jr. spends all the goodwill he earned on coloring the Titania story by miscoloring the Hulk green during the flashbacks to his first appearance. But this story alone? Buy It. If you don't want to fork over the cash, it can be read for free online at Marvel's website. Go. Now. 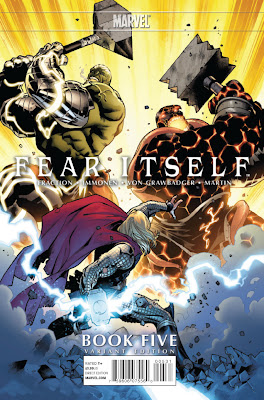 In "Brawl," the latest part of Marvel's summer event that chiefly draws attention to its "Captain America" and "Thor" franchises, the Avengers fight the Serpent while Thor takes on the Hulk and Thing--er, Nul and Angrir (now that they've got those fancy-ass hammers).

I can say "ass" in this review; after all, Thor said it himself in the comic. "And him I liked," he says over the fallen body of the Thing. "But you?" He looks at the Hulk. "You were always a giant pain in the ass." Okay, I guess--to be fair, Thor's trippin' because his daddy mistreated him, and he's really trying to hold back the end of the world. Is this an excuse to walk back a lot of recent characterization? You be the judge.

Of course, with this book being one that's clearly set up Thor, on the strength of his summer movie, as "the good guy," and the Hulk, as one of the Worthy, as "the bad guy," you can see the battle's denouement a century away.Honestly, Hulk is less a character here than a prop for Thor to wallop on. On the opposite tack, the resolution surrounding the Thing comes out of absolutely nowhere and is a deus ex machina if ever I've seen one. And in the first real clash between a core of heroes and the mighty Serpent, you can bet it won't amount to much because there are two issues left in the series.

In spite of some pretty fight scenes, it's really an issue full of banal dialogue and situations, with an air of utterly contrived hopelessness that makes one want to slit his own wrists. With each issue, this book continues to fall to new depths just like its cousin Flashpoint. I expected better of Fraction, Immonen & co., but the plotted-by-consensus event does the opposite of impress. Fear Itself is too unwieldy and should have honestly been restrained to the original Cap/Thor event it was intended to be. At least that way, its focus could have been necessarily tighter, and the book could well have been far better for it. For now, Burn It! 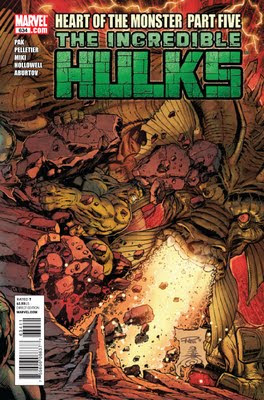 Whereas Marvel's big event of the summer is shaping up to be as much a dud as DC's, the penultimate chapter of Greg Pak's final Hulk story proves to be every bit the engaging affair one imagined it would be. Stepping back from the abyss of last month's lackluster chapter, "Heart of the Monster" part five gets back to a talking lead character and the deciphering of the ongoing mystery of who made what wishes, leading to a thrilling cliffhanger that brings the Hulk and his cast to Ground Zero--in more ways than one.

This issue brings together the Hulk, Red She-Hulk, Dr. Strange, Amadeus Cho, Dr. De Cosimo and all the villains unleashed over previous months for one big powwow in the Dark Dimension. That means, of course, that this time we don't see Rick, Jen or anyone left on Earth this time, but we're reminded they're there, and the time they spend off-panel leave one to hope things are improving for them. In the meantime, it's incredible, rampaging Hulk action as only Greg Pak and Paul Pelletier can deliver, plumbing the depths of the character's unique psychology while providing powerful, evocative visuals and some of the biggest fights this title's seen.

From the halfway point forward, the story kicks up a few notches, with Pak playing up the aspect of the "Worldbreaker" he introduced in World War Hulk above and beyond any previous showing. It won't do fans who prefer a more realistic, less Silver-Age take on ol' Greenskin any favors, but for those who like seeing him let loose, you'll get that and more here, all dynamically drawn by Pelletier and Miki. Hulk fans from the early Peter David years will get a special kick out of the last page, but really, Greg Pak is pulling no punches in providing the enormous finale fans have earned. With only one chapter left in the Incredible Hulks opus, I'm happy to say that the whole team brings the pathos needed here. Buy It!