Yes, it's true! I've been remiss in my reviewing activities. If you must know, I'm writing a book here, and preparing for this year's New York Comic Con that hits in a few short weeks. In answer to your unspoken questions, I've been reading quite a few of DC Comics' "New 52" projects this last month. Why, you ask, have I not reviewed any of those books? Simply put, I haven't found any that have compelled me to put pen to paper (or, as the case may be, fingers to keyboard). But that's changed. Oh, ye gods, how that has changed...

Early on, it was the most derided of all the series DC announced. If it wasn't "DC, how could you try and cash in on the Twilight craze?" it was "DC, why in God's name did you bring that book back, out of all the old books that could've been relaunched?" People didn't "get" why they would bring back Andrew Bennett, who'd been on the scene in the horror anthology House of Mystery for all of two years prior to its 1983 cancellation. They thought, well, obviously we're going to get "emo" vampires, because they're so de rigueur today.

For those who've caught my previous references to this series, as far back as 2007, this one's for you. For those altogether unfamiliar with the first incarnation, this one's also for you. You want to be here for this. You really do... 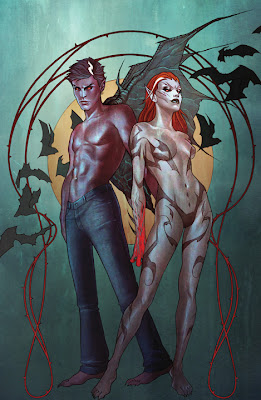 "Four hundred years ago my vampiric kiss transformed the woman I loved into a soulless thing called Mary, Queen of Blood! Today an unholy order follows her evil designs, and the blood they spill is on my hands! Thus I must stop her...I, Andrew Bennett...I...Vampire!"


Admittedly, the through-line of the series remains unchanged between the original iteration--whose saga sell is above--and this one. In this first issue, writer Joshua Hale Fialkov sets up the central conflict as a love story gone tragically wrong. Although there are bit players in the drama, the spotlight rightfully remains upon the protagonist, Andrew Bennett, and his antagonist, Mary Seward, for the duration of this story.

Fialkov establishes a dual narrative, as a conversation between the duo plays against a battle between Andrew and other vampires in the city of Boston. This cross-cutting technique allows Fialkov to both show and tell in his establishment of the status quo. The dialogue is smart and economical, and between words and deeds, we're given all we immediately need to understand the milieu. We know Andrew and his relationship with Mary. We know the "rules" concerning vampires in this new universe. We also learn the relation of the superheroic and supernatural elements, sure to clash in future episodes. 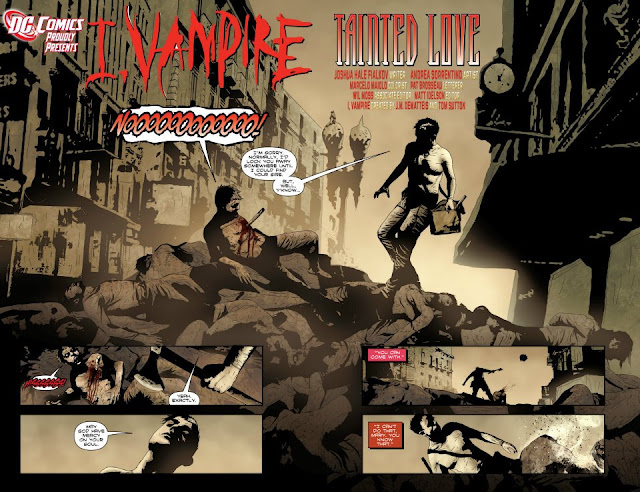 The inaugural script would be nothing without inspired artwork to bring the tale to life. Fortunately, to that end, artist Andrea Sorrentino is on the case, and he brings an eerie, evocative look to Andrew, Mary, and their world. He plays with light and shadow skillfully and, however dark Fialkov's script, he matches if not surpasses him in mood. With its short, wide, horizontal panels, the story takes on a feel that is both cinematic and claustrophobic. When the "wow" moments come--and they do--the panels heighten and the story really pops.

Marcelo Maiolo handles the color work over Sorrentino, and it's a revelation. He must establish continuity between the overlapping narratives, giving the scenes between Andrew and Mary a certain tranquility in blue hues, while Andrew fights his kind amid darker, crimson hues. And then the end. The end! Maiolo's palette nicely unites the narrative. Simply put, he's the unsung hero of this creative triad.

So, what do we have here? A story with a convincing emotional underpinning. Appropriately dark artwork that conjures Jae Lee and Jose Villarubia (and that's a very good thing). And a fresh retelling of one of my favorite obscure characters. That's enough to make me come back for round two. 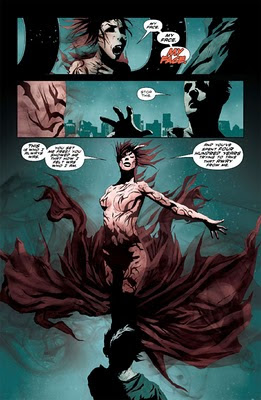 Will you like I, Vampire? Although the central conflict comes back to a failed romance, there are ample elements of Gothic horror in play. It's wicked, wicked fun, and everyone should give it a look. It's the sleeper hit of DC's "New 52" and deserves your attention!

One final note: I really, really love that DC gave creators J.M. DeMatteis and Tom Sutton due credit in this story. I think they'd be proud of the finished product. (DeMatteis has voiced his approval on Twitter; Sutton passed away in 2002.)

P.S.: If you liked my review of this issue, or if you weren't altogether convinced this book is for you, I hereby direct you to my interview with Mr. Fialkov at Comic Book Revolution about this very project!
Quoth Gary M. Miller at 8:58 PM