Yes, due to family issues, and other stuff, I haven't been able to post my overview of the work that's gone unreviewed (Skaar: Son of Hulk and Incredible Hulk #601-609). But at the very least, I owed it to you guys to make the review of Incredible Hulks #635 as timely as I could. And I've failed at that, too! Alas, good things come to those who beg, snivel and cajole. Without further ado... 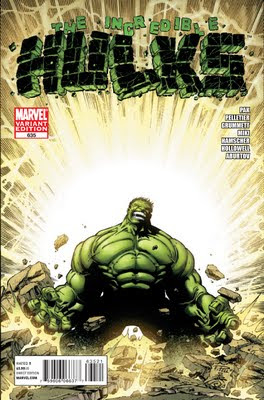 The Incredible Hulks #635
"Heart of the Monster" Part 6

"It hurts to set you free
But you'll never follow me
The end of laughter and soft lies
The end of nights we tried to die
This is the end."

After five-and-a-half years and eighty-six issues (excluding variant covers), writer Greg Pak has left the building. He's written more of the Hulk's adventures than any other writer save Peter David. That he'll be missed goes without saying. But did he go out on a high note? That is the question.

After reading issue #635 on Wednesday evening, I think the answer has to be a resounding "yes!" The finale of the six-part storyline, "Heart of the Monster," is about as fulfilling a story as there could be given the circumstances. We already know, for example, that Bruce and Betty were seen together in Marvel's Fear Itself event, wherein the Hulk becomes Nul, Breaker of Worlds and begins a rampage not even Red She-Hulk can stop. We also know that Jennifer Walters, aka She-Hulk, appears live and well in the Fear Itself: Fearsome Four limited series, so she must regain her lost powers before this series' end. And news broke last week of Fred Van Lente and Kyle Hotz's miniseries event Destroyers, which will feature both She-Hulk and A-Bomb, indicating Rick Jones wouldn't be cured, either. But really, are any of the above facts a surprise, given that Marvel and Disney are developing Hulk and the Agents of S.M.A.S.H., starring all of the gamma-irradiated heroes so prevalent in the last two years, as an animated series for 2012?

Alas, I've gotten ahead of myself. This issue features two related stories: the twenty-page, actual sixth part of "Heart" by Pak and the regular art team of Pelletier, Miki and Hollowell; and the ten-page epilogue by Pak and his "Spy Who Smashed Me" art team of Grummett and Hamscher (with Scott Hanna) that caps not only the current storyline but serves as a coda for everything since Incredible Hulk #92. Pak contributes an afterword dedicated to eighties Hulk writer Bill Mantlo, and the book ends with a pair of bonuses including a five-page "exit interview" and a cover gallery including almost every Hulk-related story Pak's ever written.

The lead story picks up where the previous issue left off, with Hulk and Red She-Hulk locked in battle in Umar's Dark Dimension. No sooner do they kill each other and everything else there with their power than is everything reincarnated so they can live to punch and hit anew. It's the Hulk's dream come true, inadvertently brought him by the enemies that wished him harm. The "Wishing War" begun when A.I.M. Scientist Supreme Monica Rappaccini turned Tyrannus' Fountain of Youth into a literal wishing well has reached its apex, and nobody is safe. That the Hulk is so at home, where he needs not worry about harming anyone, least of all the woman he loves, is awfully telling of the character's psychology. As one of this blog's readers noted, the Hulk seems to make a correlation between sex and violence--first with Caiera and now with Betty--and it all comes back to how his father used to abuse his mother. When you take that aspect into consideration, the relationship between Bruce/Hulk and Betty/Red She-Hulk becomes especially creepy, no? 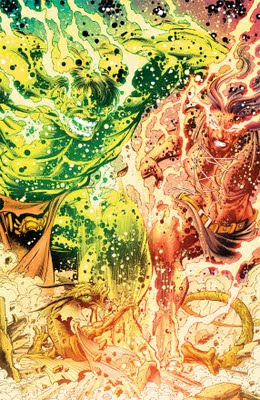 Of course, an eternity of the Hulks smashing each other would quickly become repetitive, so Tyrannus must escape the Dark Dimension with Fin Fang Foom to begin the end run. They arrive at the government's not-so-secret stash of Gamma Bombs in Yuma, AZ, long ago thought destroyed in the wake of "Gammagate" during Peter David's epic "Ground Zero" storyline of 1988. Ol' Foomy munches as many as he can, and soon he can launch them out his mouth at his foes. Guess who has to return to Earth to save the day?

The story carries to an epic conclusion all of the Silver-Age silliness that Greg Pak has ably handled since he and Jeph Loeb teamed up on the uber-events "Fall of the Hulks" and "World War Hulks." "Heart" in particular--with its physics-defying wishes, impossible displays of power, and villains from across the Green Goliath's storied history--acts as an refreshing, insane counterpoint to all the "serious" Hulk tales out there that have cropped up ever since Bill Mantlo revealed the Hulk as victim of child abuse. What's more, Greg Pak accomplishes all this while acknowledging the character's terrifying history, his tragic self-loathing, and his propensity for emotional extremes. For, as the writer notes, when the emotional stakes are at their highest, that's when Hulk smashing is most satisfying.

Particularly, I loved the way in which the Hulk's final wish echoed Banner's, but at the same time highlighted a key distinction between the two. While Banner wanted his "family" to be cured only because he didn't want them to be monsters like him, the Hulk's wish (and I won't spoil it here) showed a surprising selflessness that was touching. It made Betty's realization afterward, about the nature of Banner and Hulk's relationship, all the more poignant.

A few points just seemed to fall through the cracks this issue, and that's unfortunately to be expected when dealing with the larger, more important through-arc that concludes here. Tyrannus' defeat was glossed over, Fin Fang Foom was more a generic force of nature than an actual character, and we never do quite learn what happens to all of the bad guys left (or so it appears) in the Dark Dimension from last issue. Still, the emphasis is where it must be: on the Hulk and his relationship with Betty and the remainder of his "family." Is the main story perfect? No, of course not. But with the following ten pages, it doesn't need to be.

In "Hulk Out," Pak and Grummett use a conversation between Banner and Pak stand-in Amadeus Cho to put an exclamation point on the last five-and-a-half years. Cho says what many a fan has likely wanted to tell Banner for years. The results are engaging, but in the last few pages the tide turns again. Pak shows he's a big ol' romantic at heart, and gives Banner and his emerald alter-ego an honest-to-gosh happy ending that's quietly evocative of Peter David's Incredible Hulk #372. And while we know the happiness won't last, the last page--you'll know it when you get there--made me smile. And laugh. And maybe a tear dribbled down my cheek.

Quite the counterpoint to "The Lone and Level Sands" (in Incredible Hulk #467), that's for damn sure.

As for the artistic chores, I thought Paul Pelletier and Tom Grummett served admirably in this finale. While nowhere near the heights of, say, Incredible Hulk #611 (still the high water mark for art since the book's most recent relaunch), Pelletier hit most of the right notes here, his layouts full of dynamism and power. On the other hand, Grummett's chapter relied heavily on emotion and body language. His was a quieter power, but the work was no less solid.

So, now that it's done, what does everyone think of The Incredible Hulks #635? Was it worth the hype? Was it all a final issue from one of the best Hulk writers could be? Sound off, Hulkophiles!

(P.S.: No, I didn't do an "exit interview" with Greg Pak, but that's because Comics Alliance columnist Chris Sims beat me to the punch. Check it out here! Alas, if I have my way, you'll see more about another new project coming soon. Stay tuned!)
Quoth Gary M. Miller at 8:50 PM