Many apologies for my absence these last weeks. Between family issues, health issues, and work-related stuff that couldn't be put off, it's been a rough time for the Delusionally Honest. The good news--that I can't really talk about--is that yours truly has decided to embark on an exciting new venture that will likely mean you'll see less of me around these parts for a while. On the plus side, the likely result will be that you'll see more of me than you've ever seen before! (How's that for a tease?)

Now then, two reviews for the price of one! Because I've been away, and these things are now weekly, ya know... 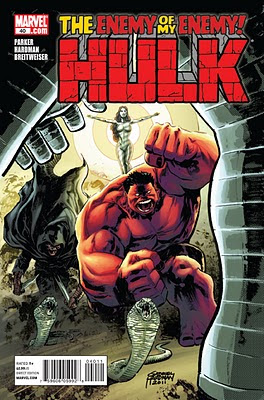 Gabriel Hardman's finale on art chores continues this issue with the climactic battle between Red Hulk and the cosmic threat Omegex. Along the way, writer Jeff Parker piles in various plot elements and characters from the previous fifteen issues of the series since the duo started on the book. General Fortean is here, blaming his old friend for the chaos. Dr. Kurinji, now better known as Zero/One,and the threat she created, Black Fog, are also on the scene...and helping the Red Hulk?!

With all the characters in this story, you'd think these twenty pages would be a cluttered mess. In fact, they're anything but. Parker uses the middle third of the Omegex saga to explore the dichotomy between Ross and Kurinji and their alter-egos, Red Hulk and Zero/One. He compares them with the question, "Are they better before or after their recent changes?" with Zero/One taking the side of cold logic while Ross addresses emotion. It makes sense, as Ross has always relied on his emotions, particularly toward his daughter Betty, whereas the original Hulk's alter-ego prided himself on logic. Can he convince Zero/One that there were advantages to her humanity? Whatever the case, this battle does give her a considerable depth and a fun little character arc.

The same can't be said for General Fortean, who through sheer brevity of his appearance here becomes a caricature of his former self, and by extension, a caricature of who Ross used to be. He's blinded by his desire to rid the world of the Red Hulk, to the point of ignoring the larger threat of Omegex. Unless we see some significant changes soon, I'm afraid Fortean will just be a sad echo: Ross 2.0.

With so many plates in the air here, the narrative momentum does slow to a crawl, with the only significant plot element being the conversation between Red Hulk and Zero/One. And that's fine, because it is truly important. But I do hope Parker is able to pull out a strong conclusion here. Will Ross again be able to change to his human self with the help of Zero/One? Will Fortean see that Red Hulk can do more than simply destroy? Such good questions deserve excellent answers.

An excellent plus, the artwork is as good as it's ever been thanks to Hardman, Bretiweiser and Charalampidis. The colorists' work blends together very well here, to the point I honestly couldn't separate one from the other. I said it before and I'll say it again: I'm going to miss Hardman's formidable talents on this book.

The verdict? Another issue, another instance where I gotta say Buy It. 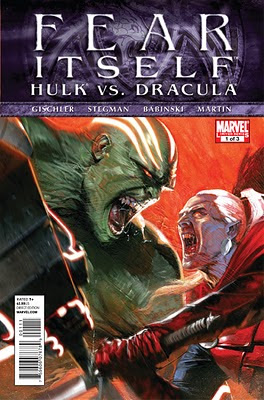 The book that would have been Incredible Hulk #636 arrives, transitioning the Green Goliath from Greg Pak's series through the first five issues of Fear Itself, Marvel's summer event, and on to this issue. For those not following that series, Bruce Banner and Betty Ross decided to escape to Brazil to sort out their relationship. However, a magical hammer fell from the sky, and when the Hulk picked it up he transformed into Nul, Breaker of Worlds, and swiftly went on a rampage through the rainforest. Neither Red She-Hulk nor the Avengers could stop him. He finally arrived in New York where he fought the mighty Thor alongside the Thing, a.k.a. Angrir, Breaker of Souls. Thor knocked him into orbit, but as we all know, what goes up must come down...

Victor Gischler is famous at Marvel for his recent involvement with the X-Men in "Curse of the Mutants," an event which brought the company's vampire nation in conflict with the mighty mutants. In those adventures, too, Marvel has shifted away from the previous depiction of vampires in books like Tomb of Dracula (itself taking cues from the classic depiction and Universal Studios' films). Now, Dracula appears as a white-haired, armored hybrid of several visions glimpsed in Francis Ford Coppola's Bram Stoker's Dracula. His history has been thrown in a blender, with his son Janus popping up again out of nowhere, and another son, Xarus, having figured in the earlier crossover.

The story here is straightforward: the possessed Hulk lands in the Carpathian Mountains, the homeland of Dracula and his assembled legions. Hulk smashes mindlessly, and the vampires mount their response. It's a very by-the-numbers response that reflects precious little of what is enticing about these two corners of the Marvel Universe. It's hard to root for Dracula and his ilk because of their infighting and their inhumanity; moreover, it's only slightly less difficult to root for the Hulk. Possessed, he's not really going to have any powerful character moments: as such, the only thrill can be had by seeing how much he can smash. In this issue, that's not much.

The story's sole saving grace so far is Ryan Stegman, who ably illustrates the Hulk's sheer power. I also really love the looks of the various monsters during the battle scenes. (Was that a Wendigo? What's it doing outside North America?) If this series is remarkable for nothing else, Stegman certainly brings his "A" game here.

Still, in spite of the energetic art, I can't see past the flat story. Unless you're a hardcore fan of Hulk or Dracula's legions, Skip It.