As I type you these words, I'm mere hours away from attending this year's New York Comic Con. There, I'll be hobnobbing with the comic industry's best and brightest (and yeah, the ne'er-do-wells, too!). I thought I'd give you a review to get you in the mood, especially since it has been longer than usual between entries these past few weeks.

So, courtesy Victor Gischler, Ryan Stegman, Mike Babinski & Frank Martin Jr., here comes Fear Itself: Hulk Vs. Dracula #3, in which the hammer-ized Hulk--possibly, maybe?--faces the evil might of Count Dracula himself. 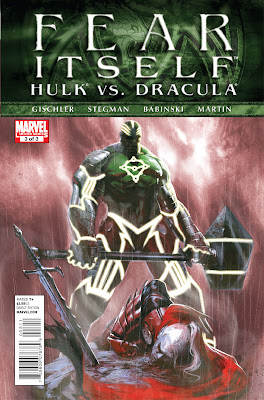 With the beginning chapter doing an okay job of setting up the key conflict of this miniseries, and the second piece a regurgitation of the first, Gischler and Stegman, et al. had their work cut out for them in this final entry in the series. While events occur in this chapter that do contribute a good deal to the overall tapestry of Marvel's summer event, so much so that I'm honestly shocked, the overall effort falls squarely in the realm of "too little, too late."

This story features the second-ever confrontation between the Hulk and Dracula (the first was in Peter David and Gabriel Hardman's one-off prose story from Monster-Size Hulk), and it's quite a bit different than that tale. The whole series long, Gischler has painted this version of Dracula as a master strategist, sending other vampires into battle in his stead with no regard for their well-being. This time he finally involves himself directly in the main battle. With the title of this miniseries being what it is, I would have honestly expected more of a battle than the handful of pages devoted to the event herein.

Last time out, I remarked how artists Stegman and Babinski weren't working up to their potential, probably due to the clash of their "comedy" sensibilities with the book's horror-oriented tone. While not perfect, this issue the duo balances their efforts much better, and achieves a stronger finished product. Stegman's artistic high point comes in the finale, where Dracula preys upon the Hulk's emotional core. Just like the titular monster, he manages to find strength in emotion.

The story isn't a total wash as in previous segments. True, the Hulk never finds a consistent voice, moving from "Hulk smash" to speaking fairly intelligibly, to grunting out those unusual Norse runes that mark him as a tool of the Serpent. It is also true that none of the vampires emerge as a credible threat, or a worthwhile protagonist, if there is one to be found in the narrative. Succinctly, I was surprised the story ended in the manner it did, if only for the reason that such an event should have taken place in the main Fear Itself series. Then again--and this is as big a hint as you'll get from me about the story's conclusion--I thought for sure all of "The Worthy" would be shown getting their hammers in that series' second issue, too.

I'm right on the line here. Nobody will remember the events of this miniseries in just a few weeks. On the other hand, this entry was better than the two before it, even if it only briefly delivered on its promises.

Go ahead and Read It.