Hulk & Switch; Or, Using a Name Artist As Sales Gimmick

There's regrettable news coming from Marvel today. Hot on the heels of January 2012's solicitation that clearly named Whilce Portacio as artist on Marvel's Incredible Hulk relaunch with issue #4 comes the semi-official word courtesy Top Cow editor Filip Sablik (click for link) that Marc Silvestri has not only left the title with its third issue, but also that he was only ever contracted to draw the first three issues of the series. 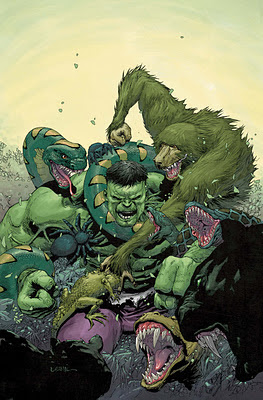 Is this what Marvel Comics has come to? Using a "big name" artist as a prop to temporarily push sales numbers for a new series higher? Already they released eight variant covers of the book in question, so it's like piling gimmick upon gimmick. (If only they used that "Still $2.99" gimmick. That's one I could get on board with.)

Obviously, Marvel is hoping that readers will be engaged enough by Jason Aaron's stories that they'll stick around regardless of a drastic artistic shift. If the first issue is any judge, Hulk fandom is now divided in the same way as Banner and Hulk are now separate beings. With Banner taking on an unfavorable comparison to H.G. Wells' Dr. Moreau, it's difficult to argue the character still has any sympathy. We'll see if the second issue improves matters.

I miss the days when good stories sold comics.