Greetings, gents. Due to illness--and developments with my "real job"--and yeah, there's that book I've begun writing--I haven't been around to post any reviews! It's about time I got back to it, here, and that means reviewing not one, but two new books by one of Marvel's best & brightest.

As everyone knows, although I'm a "Hulk guy" at heart, that's never stopped me from picking up countless other Marvel books, plus DC books, Image, and some other indie press publications. Send me something (at delusionalhonesty [at] gmail [dot] com) and I'll do my level best to review it in a timely manner. That brings us to a series I haven't picked up in quite some time, since just after the departure of Buffy and Angel writer Joss Whedon.


Caveat lector: I have been well-read on those mutant folk. At one time, I had an X-collection the envy of most X-fans. Full run of Uncanny X-Men if you include the first four Essential volumes? Check. Full runs of X-Men, New Mutants, X-Force, Cable, Wolverine, and a gajillion other series, regular and limited? Check. About the only series I didn't own that was X-related was Deadpool. But, aside from Peter David's X-Factor, they lost me when the X-folk relocated to San Francisco. And I even drifted away from X-Factor some time ago. For me, X-Men was a light that burned bright, borne from looking at far too many long boxes of quarter books, and then extinguished itself rather quickly. 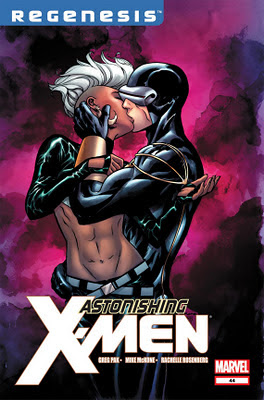 As part of "Regenesis," the latest rebranding of the X-Men titles, writer Greg Pak and artist Mike McKone have come aboard Astonishing X-Men to tell a three-part tale. The creative shuffle is the latest in a long line for the book, which since Whedon's departure has been a showcase for Marvel's most popular talent--or at the very least, writers itching to tell an X-tale they can't fit anywhere else on the schedule.

And what of "Exalted," the storyline that begins here in this issue? It's...well, an intriguing puzzle, so far.

Scott Summers, the mutant called Cyclops, has been recovering from injuries incurred recently. He remains at Utopia, the San Francisco Bay area base of the X-Men, while the half of the team headed by Wolverine left to reopen the old Westchester school. Physically, he's fit; however, mentally is another story, as he demonstrates by using his optic blasts to decimate the facility's locker room. And then, Storm shows up--looking exactly as she did in the Claremont/Windsor-Smith era of the eighties, white mohawk and all. A glorious battle ensues, unique for its depiction of Cyclops' abilities...and then, as they go together toward parts unknown, that's when the weird gets weirder.

It's interesting that Pak and artist McKone go for the nostalgia value of a mohawked Storm as an entry point into this storyline, and then up the ante with the provocative cover image. Fans who weren't around in the eighties may be intrigued, and I hope they are, because Storm's change in appearance is only the gateway into the storyline set to unfold. The script charges full-steam ahead, never really stopping to let you breathe, a feeling only exacerbated by McKone's clean storytelling and topped off with Rachelle Rosenberg's exciting palette of colors.

I'm increasingly intrigued by the world into which Cyclops & co. are dropped in Astonishing X-Men #44. It's true, some fans may feel a bit flummoxed, especially those who haven't followed the merry mutants' adventures in some time. Still, I've always liked the stoic Scott Summers, and to follow him through an unusual adventure in the spirit of Judd Winick's Exiles is something of a treat. While by no means perfect--the ending is no doubt disorienting--"Exalted" is off to a good start. Read It. 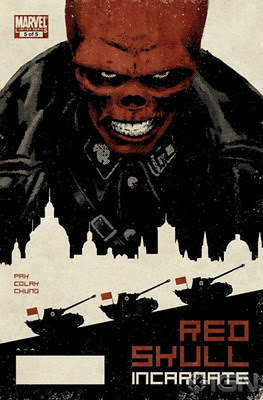 As for the other book on this week's delayed-review list, Red Skull: Incarnate #5, it wraps up the origin of Johann Schmidt, the Rote Schädel (that's "Red Skull" to the non-German-speakers) with the same frightening flourish as writer Greg Pak concluded the origin of the villain who could be seen as the Skull's opposite in Magneto: Testament a few years prior.

Pak, this time joined by artist Mirko Colak, brings the tale of Schmidt full circle with--ironically enough--a plot to kill Hitler when he comes to discipline Ernst Röhm at a Munich hotel. Schmidt, his friend Dieter in tow, constructs a simple plan and goes through the motions, chillingly, to get that which he feels he deserves. The plot is an exercise in cold calculation, a hallmark of the later Red Skull. What's most incredible about this final adventure is how it's all based in stark reality--as has the entire series been--with no masks, no costumes, only human beings carrying out their own cultivated evil designs.

The minimalist script, together with the low-key, yet no less powerful artwork by Colak and colorist Matthew Wilson, really brings a powerful close to the Skull's first adventure. If you haven't picked up this book in the single issues--if this review gets you on board only too late--then do yourself a big favor and pre-order the graphic novel collection of this series. If you've been following all along or you just want a taste of the Skull's evil unfettered by Captain America, then I have two words about Red Skull: Incarnate #5: Buy It.