"Christmassy"? Well, the colors are. The books themselves...read the following, then make your judgments. This time, I'll be covering a few Hulk books, and then next time we'll stray off the beaten path and look at some books you don't usually see around here. Everyone ready? 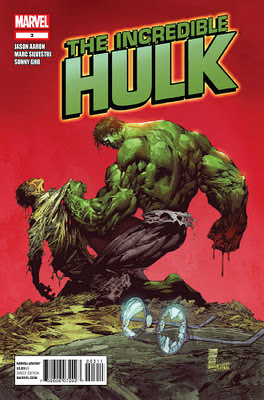 First things first: If you're looking for clues to how man was separated from monster, you'll find the first inklings outside of scribe Jason Aaron's preview tale in Fear Itself #7 here. You'll find Aaron touching on Bruce Banner's past with his abusive father, and you'll find a mad scientist can turn a whole lot more than a couple of wild boars into gamma mutates. What you won't find here is any sign that Bruce Banner is anything but a bottom-scraping sonuvabitch. And that, as in the previous issue, is where Aaron really loses this reader. Establishing that the Hulk sees Banner as evil for keeping him locked away inside himself is one thing; showing that Banner's going way, way off the deep end and actually committing--let's not fool ourselves--evil deeds is something altogether different.

This issue, artist Marc Silvestri, fresh off a stay in the hospital for an injured ankle, returns to full penciler duties just in time for his grand exit...or does he? Certainly this issue no other artist's work can easily be seen, unlike last issue with Billy Tan and Whilce Portacio all too visible. However, that doesn't mean there weren't other artists making sure Silvestri made his tight deadline. Silvestri himself receives credit for "line art," but his studio, Top Cow, receives a "special thanks" credit (hence my using Silvestri's name in quotes above). It's quite obvious the difference in credits is a direct response to last issue's "monster mash" of eleven credited artists. While the package holds together better than last month, and in places the art is incredibly dynamic, it's definitely best for all concerned that a new and hopefully more reliable artist takes over next issue.

As mentioned before, Banner takes his turn at being "Dr. Moreau" further this month, sending his "Boar Brothers" 26 and 27 to the Hulk's recent hideout. A battle ensues, Hulk smashes, and then Amanda Von Doom and her super-secret organization are oh so happy because the battle has made Hulk do exactly what they wanted him to do last month. "Asunder" has felt by-the-numbers in its depiction of both the Hulk and Von Doom. Hulk is at peace, someone comes around to smash it all away, and the Hulk decides to go do some more smashing to smash those who smashed his chance at non-smashiness. The only new thing Aaron and Silvestri offer--and really, "new" isn't the word--is that the Hulk's smashing this time seems to set off seismic waves of force in the surrounding areas. At the very least, the ending of this story makes it clear Aaron is cutting to the heart of the conflict, setting man against monster on a very real playing field. That counts for something, I suppose.

I said earlier that this issue does contain a few hints about how the Hulk and Banner came to be separate beings this time. The answer--at least, as I see it--casts some serious doubt on whether that's really Banner we're seeing, with the mania and the unkempt hair and the brain tumor the size of a walnut. It casts equal doubt on whether that's really the Hulk. Aside from the "newborn" allusion, why would both Banner and the Hulk be shaved bald upon their separation? What's more, who would have the technology to separate man from monster--and why would Banner use a lab that seems to be set up in much the same way as the one in which he underwent his supernatural divorce?

There's still not enough to recommend this storyline or this new series after this third part of "Asunder." I've outgrown my revulsion at the second chapter, but still, I really think Aaron might be doing irreparable harm to the character of Bruce Banner. (No easy feat for one who has already been established as killing his own father and suffering from lifelong psychological trauma.) Maybe former Hulk writer Greg Pak bears some of the burden, as this storyline seems to explore some of his dialogue in which Banner postulated the Hulk was created to save the world from his own incredible intellect. Although I believe Pak later expressed through Banner that his idea was only clever tomfoolery, the fact we're now dealing with such a storyline now indicates some people just don't know how to take jokes. 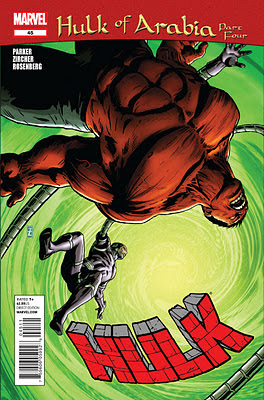 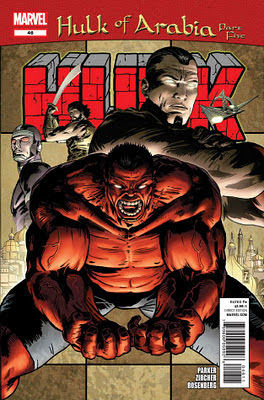 On the other hand, Jeff Parker has, with the help of artists Gabriel Hardman and Patch Zircher, made Hulk into one of the best books Marvel publishes. If you're reading this, Jeff? I totally hate you for it. Use your talents for the Up Side of the Schwartz and give us a go on Robert Bruce Banner soon, yes? (You're invited, too, Patch. Rachelle? Anytime!)

This month's pair of issues successfully resolve the five-part "Hulk of Arabia" arc, in which "Thunderbolt" Ross, joined by Machine Man, finally gets to the bottom of Dagan Shah's insidious plans to carve out a niche for himself and his followers in the middle of the desert. Unsurprisingly, the storyline pretty much ends as it was choreographed by Steve Rogers and his merry band of Secret Avengers some issues ago, but Parker and Zircher manage to still pull off some surprises, including Shah's very cosmic origin story.

Most interesting are two key details. Parker uses Machine Man's presence to subtly examine Ross' own complex relationship with another artificial lifeform, his Gamma Base liaison Annie. The subtext is there in every question Ross asks, and I can't wait until her next appearance so we can see how ol "Thunderbolt" applies what he's learned. Parker's also made some salient points about Ross' status as a Hulk in this tale, and he has used Shah as his mouthpiece through which to do so. Specifically, Ross does rely on the public perception of who and what a Hulk is. Jeph Loeb used this point without stating it, such as when the Red Hulk only roared as he smashed through the SHIELD Helicarrier so as not to betray his true, strategic aims to Iron Man. Parker has made the point that Ross' hulking form hides his keen strategic mind--a mind which very likely has been sharpened by the mixture of gamma and cosmic rays involved in his mutation. It's this important distinction that separates Ross from Banner. Say what you like about Banner's Hulk: "Strategy" is not a word that involves itself easily.

The more I see Patch Zircher's artwork on this book, the more I feel he's right at home drawing monsters smashing things. He's asked to stretch his artistic muscles particularly in #45, with Dagan Shah's unusual origin, and he acquits himself very well. Rachelle Rosenberg matches his pace, using one palette for the more reality-based scenes and another for the otherworldly realms Red Hulk and Machine Man visit as they discover the rest of the story. It goes without saying that I really want to see this team work together again, and soon.

"Hulk of Arabia" spices up Parker's series with an international flavor, laying the groundwork for future encounters with Shah and others in the area. It also marks time by providing yet another encounter between the Red Hulk and General Fortean, and keeps Ross checked in with the other heroes in the Marvel Universe. It's fascinating that while the original Hulk gets more insular, this new Hulk gains vast exposure among the biggest super-heroes. While I still lament the fact there's a Hulk book out there that doesn't feature Robert Bruce Banner, I can't argue that this isn't one fine book month in and out.

But yeah, Parker, Up Side, Schwartz, green Hulk, yesterday.