Hulk: Season One - The Day the Hulk Turned Green?

If my fellow Hulk fans have been looking at recent comics news this weekend, you might've seen a reason to be extra giddy for next year to arrive. Marvel Comics is releasing a series of original hardcover graphic novels under the imprint of "Season One," featuring origin stories for its many iconic heroes. Several months ago, the company announced the first four titles, including tales of the Fantastic Four, Spider-Man, Daredevil and the X-Men. This time around, they've got three more origin stories, including Ant-Man, Doctor Strange (by Greg Pak), and...wait for it... 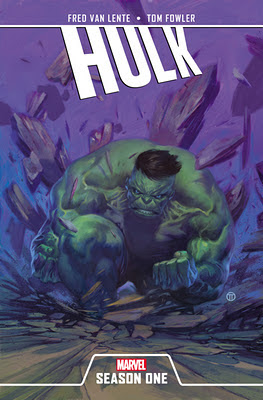 Of course, ol' Fred's no stranger to this blog or to the Hulk, having written some gamma-rific tales in books like Hulk Family: Gamma Genes, Hulk: Broken Worlds, All-New Savage She-Hulk (and accompanying backup tales in Incredible Hulk), and the upcoming Hulk Smash Avengers limited series, among others. He also co-wrote Incredible Hercules with Greg Pak when the Lion of Olympus took over Greenskin's book after World War Hulk. All that hanging around the Gregarious One must've left him with a bad case of the gamma flu, because he's about to unleash over 100 pages of purple-pantsed action in the mighty Marvel manner!

And even though their own exposure to Hulkish things hasn't been quite on-par with Mr. Van Lente, let that not diminish the heroic efforts of Tom Fowler, who's been making Spidey spinoff Venom his home these last few months, nor Jordie Bellaire, who's working right now with Hulk alum Gabriel Hardman on Boom! Studios' Betrayal of the Planet of the Apes miniseries! And yes, friends, the two of them have already made beautiful Hulksome goodness together in this sketch of the sensational She-Hulk! (Click below to check out the post on Jordie's site!) 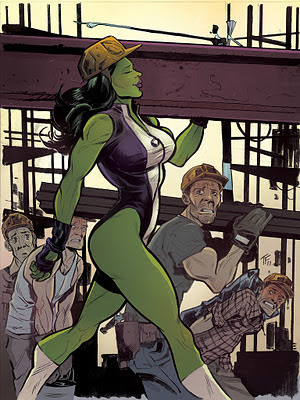 You can bet as the release date approaches (it's currently scheduled for August '12) I'll be rounding up more details and maybe even getting the creators to say a few words about this titanic tome! In the meantime, I did want to add some early observations based on everything that's out there so far (mostly a CBR exclusive interview with Van Lente & Fowler).

In the interview, Fowler specifically notes that he and Van Lente are working with a different incarnation of the Hulk than in Jeph Loeb and Tim Sale's previous high-profile origin rework, Hulk: Gray: "[W]e're dealing with the gray Hulk who wasn't just talking in three word sentences and saying, 'Smash' and 'Puny' a lot. This was kind of that a-hole Hulk that would often tell people to go to hell." Sounds a lot like the Hulk of Incredible Hulk #1 by Stan and Jack, doesn't it? Point!

Van Lente also notes that he's reshuffling a bit of the supporting cast to bring the series more up to date with the times. Particularly, Betty is now "an active member of the military, which sort of reflects how now the U.S. Military more actively recruits women and how they have a more active role in the military now than they did in the '60s." Additionally, Betty won't be the only woman in Bruce Banner's life, as the story "reintroduces a character that I created who has been directly associated with Bruce Banner in a romantic way by other writers. I'm now officially retconning her into Hulk continuity, and she plays a major role in the story. Basically, I thought Betty needed a romantic rival for Bruce's affections and that's this character." Sounds like Monica Rappaccini, AIM Scientist Supreme and mother to the new Scorpion, will be front and center.

But what about the bad guys? There's no word yet on whether the Gargoyle will play a role in this revised origin tale, but I'd be surprised if he weren't there in some fashion, Cold War or no. However, Van Lente's assertion we'll see "a very well known evil Marvel organization" speaks well to AIM's involvement since Monica will be around. The writer's also promised "a brand new Hulk villain called Biocide, who's pretty awful and horrible, and therefore awesome."

My last tease? Well, you've seen the cover to the book, and Julian Totino Tedesco's illustration clearly shows a green-skinned monster. On the other hand, Tom Fowler's mentioned that he's drawing a gray-skinned behemoth. Might we finally see the moment Hulk fans have waited five decades for? We know that sometime between Incredible Hulk #1 and 2, the Hulk turned from gray to green. Aside from a way-too-brief scene in Uncanny Origins #5, we've never seen how that color change occurred. Something tells me that if Fred Van Lente's involved, he won't give us a mere throwaway scene and that the shift from gray to green will be a pivotal moment in the narrative.

Alas, the answers are many months away. I'll follow up at some point next year, but for now, feel free to visit the above links, as well as those to Tom Fowler's blog, where he's sculpted some Hulk and General Ross heads for reference for this original graphic novel!