I know, I know: "Where are the retrospectives, Gary?" I've been terribly remiss in bringing any historical pieces to this blog in the last few weeks. There's a very good reason for that, and one that you'll get within a few short weeks if all goes well. (Here's a hint: It likely involves a Kickstarter project you'll want to get in on.) I'll go back to those history pieces very soon, but in the meantime, here are two more reviews, culled from this week's releases. Without further ado... 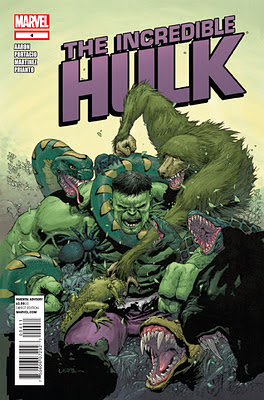 For better or worse, "Hulk Vs. Banner!" begins this issue with "Island of 1000 Hulks," without the series' first artist (and most of his countless assistants) and with another Image Comics alum, Whilce Portacio. With the last three issues' pretense out of the way, the Hulk and the "government-sanctioned mad squad of crazy scientist assassins" headed by Amanda Von Doom (no relation!) go to kick Banner's butt. From the title of this portion, you can guess--sort of--what they find there.

If you've been following the series for its short duration, you know what you're apt to find here: Bruce Banner playing the mad scientist role to the hilt; the Hulk providing the voice of reason; Amanda Von Doom being hot for the Hulk's bod while insisting she's got no relation to the famous Von Doom; and dozens of monsters and widespread destruction. At the very least, this issue brings Banner and the Hulk together for the battle fans have wanted to see since they separated in Fear Itself.

I don't envy Jason Aaron's assignment month in and out. It's clear he's done a lot of thinking about this new status quo embodied in the storyline's title. But is it really a place the series should go? The Hulk is the hero, and without the "monster's" influence, Banner is the villain. You can take it that way, or you can take it differently, considering that the Hulk was the receptacle for every emotion Banner chose to repress. And while these scenarios should lend an air of tragedy to Banner's saga, the sad truth is that Aaron only seems to know how to play this card one way: Bruce has gone around-the-bend looneytunes, period, end of sentence. He's invading military bases and absconding with "gamma juice" (?!?) with which he churns out mutated animal after mutated animal.

At the very least, I'd believed the departure of Silvestri would be an asset to the series; after all, it's hard to establish any consistency with a multitude of artists contributing to each issue. Unfortunately, while Portacio's art is much cleaner than his predecessor's, his execution leaves much to be desired. Characters are awkwardly posed and out-of-proportion, and the finished art--full of crosshatching and vacillating between two very different inkers--only lets down any promise offered by the new penciler. We need artistic consistency, and we need it yesterday. 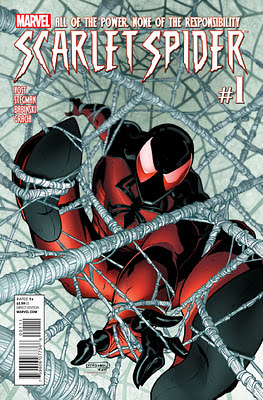 This isn't your father's Spider-Man. That much is obvious, from the cover whose logo conjures memories of the jagged Spidey logo from the nineties' animated series, to the sell that promises "All of the Power, None of the Responsibility" in the same typeface as which adorns Marvel's own Wolverine. What this is, however, is a whole mess of webby fun.

Kaine has traveled a rocky road to arrive where he is. The imperfect clone of Spider-Man (about whom I wrote a duo of in-depth articles here and here), who became a stone-cold killer after the Jackal, his creator, rejected him, has recently been cured of the degenerative condition that caused him near-constant agony since birth. In "Spider-Island" he saved New York City and perhaps the world. He's picked up a few things from his "brother" Peter, and perhaps the other clone, Ben Reilly, as well. In a new town, with a new lease on life, he tries to suppress his more violent instincts--only to find that it isn't quite that easy.

When Kaine began appearing in Amazing Spider-Man several months ago, during "Grim Hunt" and even "Spider-Island," I thought there were flashes of the character I remembered, the one who prospered under the pen of "Clone Saga" architect J.M. DeMatteis. Still, some things about the "new" Kaine really rankled. Thankfully, Scarlet Spider scribe Chris Yost really seems to be familiar with those early stories--particularly Spider-Man: The Lost Years and Redemption--and lets those sagas inform his take on the villain-turned-wannabe-hero. Peter Parker's angst has been turned, twisted and amped up to "11" in Kaine, a character unsure if he wants to be redeemed. It's amazing what he's been given these last few months, and still, he's suspicious to a fault. He still relies on some of his bad behaviors, and when he tries to do the right thing, it backfires. Can anything smooth the rough edges of his soul?

Speaking of rough edges, the artistic team of Ryan Stegman and Michael Babinski, aided and abetted by colorist Marte Gracia...has none. Seriously. I've watched Stegman and Babinski work on a few projects, like the "Red She-Hulk" back-up stories in Incredible Hulk, as well as their own four-issue She-Hulks series, but this is the book destined to make spidery stars of them both. And, dear God do I want page 14 (you'll know the one)! Kaine's soul is bared in this story, with Stegman's facial expressions telling stories all by themselves. The fact there are no costumes for the majority of this story is a terrific asset.

Yes, that's no misprint: About the only piece of the puzzle not provided in this outstanding introductory story is the new Scarlet Spider's actual costume, but with the darkness inherent in the character, it's not missed. In fact, were there not the need to hide Kaine's face--because it just so happens to also be the face of ol' Peter Parker--I would want every issue to be just like this. No tights? No problem!

If you were scared that this story would relaunch the whole nineties "Clone Saga" all over again: Don't fear. This is the tale of a darker Spider-Man. It's spooky, and it's a thorny road the Scarlet Spider will travel. Let's walk the road with him, yes?

If you enjoyed the Marvel Point One one-shot, you'll love this one. Buy It.