(Apropos of absolutely nothing, today and throughout the weekend I'll be wandering the floor of the Mesa Convention Center for the Amazing Arizona Comic Con. Hang around the Samurai Comics booth long enough and I'm sure to come around. Just don't wait too long or be too conspicuous, because Mike & Moryha will start to look at you funny.)

Now then, did somebody say something about reviews? 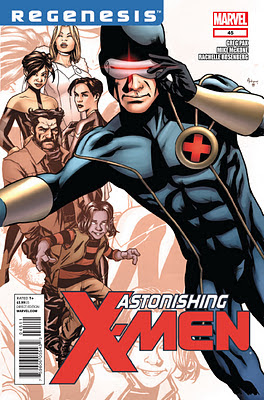 The "Regenesis" of Marvel's mutant teams continues with the second installment of Greg Pak's "Exalted" storyline this month. When we left Cyclops last month, he'd been hijacked off-world, to a parallel dimension full of strange yet familiar doubles of his friends in the X-Men. He awakens in a chamber tailor-made to contain and absorb his optic blasts. Now that he finds himself in this incredible new tableau, the question is...now what?

One wonders, with Cyclops being the proverbial stranger in a strange land, how or even if Pak's X-saga will impact the ongoing storylines set forth in the other titles. The situation's even more tenuous with the recent announcement that he, McKone and Rosenberg are only on board through #47, with a new creative team taking over henceforth. Still, I'm a sucker for alternate-reality stories, and this one is just plain fun. It helps that Pak only employs the most familiar of the modern X-Men in this story, and the twists upon the familiar formulae are intriguing. Kid Nightcrawler? A bearded Wolverine with more than a few tricks up his sleeve? A mostly-the-same, snarky White Queen? It's like home, but...not. And the biggest surprise--unless I am totally misreading the story--is on the last page, with the identity of the mutant known as Savior.

Through it all, Mike McKone delivers the same clear linework he's brought to various other series. Cyclops is appropriately heroic, Wolverine's somewhat haggard, Nightcrawler has the joy of a child, and the ladies--all the ladies--are appropriately sexy. He knows when to give us big, dynamic shots and knows when a few simple lines are all the expression that's needed. Rachelle Rosenberg once again fills the bill with pastel tones of red, yellow and blue in the prison scenes, darkening the palette as time goes on until the blinding finish. Kudos.

If you like alternate-reality X-sagas and surprises around every corner, Read It. 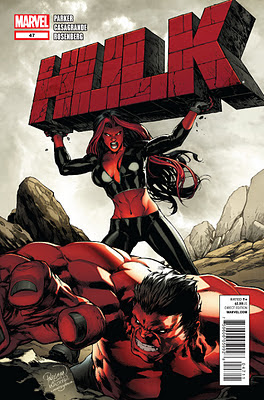 If you're suffering a dearth of Hulk-on-Hulk action in Incredible Hulk these days, you're in luck, for this issue marks the first part of a new saga co-starring Betty Ross, the Red She-Hulk. Currently one of the newest Defenders (in the title of the same name), she appears here to fill a different kind of niche. After all, she's not only the long-suffering wife of Bruce Banner, she's also the daughter of this title's lead character, Thad Ross. It's been some time since father and daughter had a heart-to-heart--or any kind of contact, really--and so this storyline's more than a bit overdue.

Parker pulls it all off with aplomb, showing that Betty and Red She-Hulk are the same in some respects, yet drastically different in others. Red She-Hulk expresses herself in ways that Betty represses, acting out toward her father instead of taking the time to talk things out. It's a thrilling opening for the book, certainly, leading to the main thrust of the story featuring one of Ross' newest enemies as one of the many ongoing threads in this book proceeds.

Unfortunately, I can't say the same for Italian import Elena Casagrande, who returns for art chores this month alongside regular (?) colorist Rachelle Rosenberg. Her figures are often unusually posed and stiff, compared even to her earlier work on this series (in the "Fear Itself" crossovers, #37-38). She's at her best outside of the huge action scenes, which means the middle third of this book is exemplary. Otherwise, file it under "nothing special." Thankfully, Rosenberg's colors save the work and make the entire story flow as ably as do Parker's words.

The storyline, with its intersection of two key plot points (old villain + Betty), makes for an intriguing caper, and I can't wait for next month's conclusion. If you can get past some of the artwork, by all means Read It. 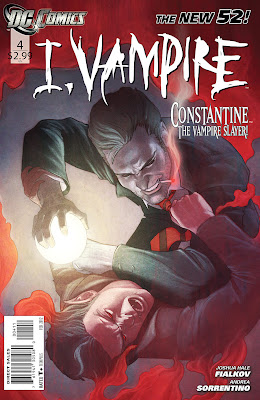 Last but certainly not least in this triad of reviews comes the frequently brilliant I, Vampire by Joshua Hale Fialkov and Andrea Sorrentino. This issue gives readers the first taste of the upcoming (or so it appears) war between super-heroes and vampires, courtesy a guest appearance by John Constantine, aka Hellblazer. When Andrew Bennett leaves his friends to feed, he meets Steve, a man to whom the curse of vampirism is nearly new. The two talk, and let's just say that Bennett's naivete is nearly his undoing. As if that weren't enough, there's an intense surprise on the final page that puts the whole adventure in perspective.

I have to hand it to writer Joshua Hale Fialkov for bringing this series to vivid, vampiric life. Any other writer could have played up the gore, or accentuated the more Twilight-like aspects of Bennett's struggle, but the subtle touches really make this book stand out. It's a relatively simple tale, but the combination of the spot-on dialogue for Bennett, as well as the low-key, powerful artwork by Sorrentino (aided and abetted by Maiolo), elevate it.

Similarly, adding characters from the greater DC Universe with whom Bennett can interact has really been a point ingrained from the beginning, and with Constantine here, the larger tapestry is starting to show. I do wonder, however, how Bennett, Mary and her kin will all react when characters outside the "Dark" side of DC arrive. It's one thing to have vampires rise up against members of, say, the Justice League Dark, but quite another to have the actual Justice League around. For that, I'm really looking forward to Bennett & co.'s upcoming jaunt to Gotham, just under a month away.

Oh, I still have my worries--for one, Sorrentino still likes working in those pages full of widescreen panels waaay too much for my taste, but he's diversifying and that's refreshing. But that's a small quibble among so much horrific goodness. I can't say this enough, month in and out: Buy It.

What did you think of these new releases? Buy 'em at your local comic shop, or online at Comixology, and post your opinions here!