Back in January, I attended the Amazing Arizona Comic Convention at the Mesa Convention Center in downtown Mesa, AZ. I renewed some acquaintances and met some great people in the three-day event. Presented in this blog entry are a bunch of photos taken by Agustin Alanis. Sketches procured by yours truly from artists on the show floor are shown, where possible, right beside the artist who did the work! Click on images for larger versions. 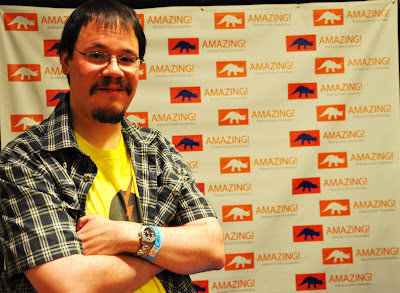 Where appropriate, I've linked the talents and people shown. If you find you or your works are displayed, uncredited, in one of the pictures below, please contact me (at delusional honesty at gmail dot com) and I'll add your name and a link to your website if applicable.

If anyone enjoys Mr. Alanis' brilliant work and wishes to see more and/or hire him for a photography gig in the greater Phoenix area, look no further than his Facebook page.

One of the big draws at comic conventions today is cosplay, and this show was no different! On every day of the show, one could see any number of fans dressing up in the (sometimes extraordinarily elaborate) costumes of their favorite heroes and villains...as well as, well, judge for yourself! You asked for cosplayers--you got 'em! 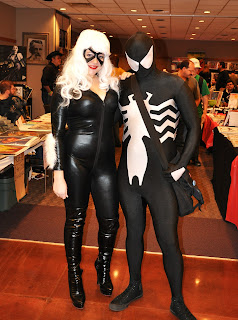 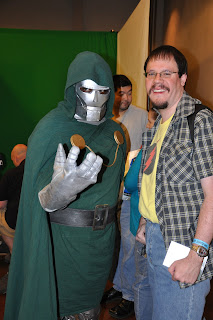 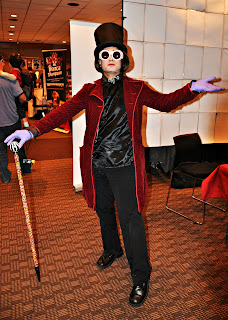 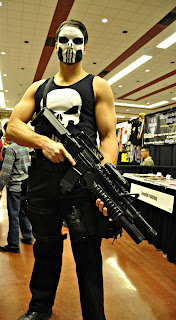 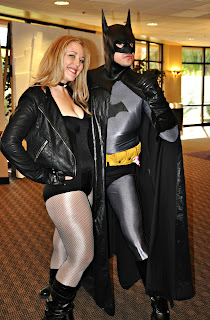 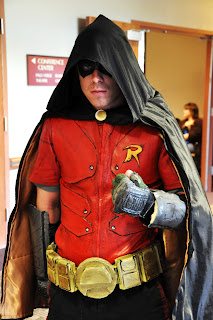 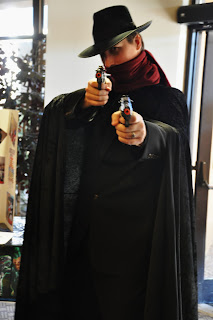 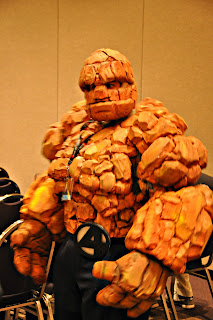 Some of the cosplayers at the show were there to promote new comics, like Lindsay Elyse, dressed as one of the characters from Ardden's Knightingail: 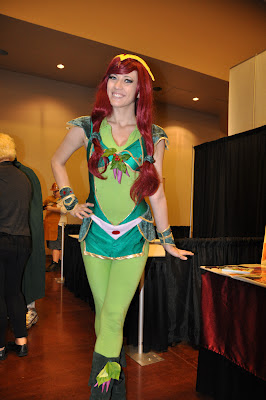 Then, there was AZ convention fixture Cara Nicole, also known as AZ Powergirl! You can "Like" her fan page on Facebook: 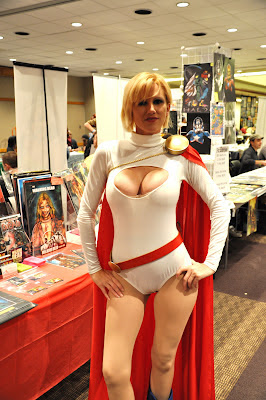 Out on the show floor, a few exhibitors showed their terrific props and other goods, both for sale and for show!

The Monster Shop is a part of Hall of Fame Collectables in Mesa, AZ. They've got original props, autographs, collector masks, and other limited edition goods. You can visit their website or "Like" their Facebook page. And below you can see a mask of Doug Bradley as your favorite Pinhead! 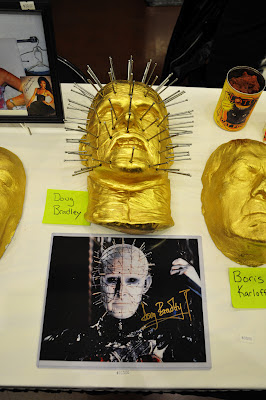 Chainsaw Killers Anonymous Studios specializes in photography and prop construction. They had a setup at the show with armor like that shown in the Predator series of motion pictures. Check out the picture below, then visit CKA Studios' website! 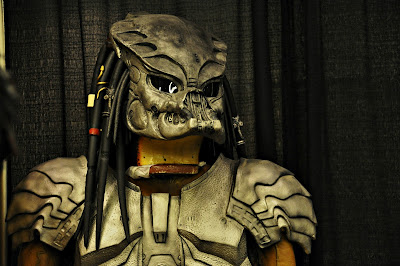 If you're more in the mood for just looking at scary figures instead of buying them, perhaps Monsterland in Mesa, AZ is more your speed! At the show, they had some of their exhibits on display. Scary, well-crafted stuff! If you're in the area, stop by--I know I'll be headed there soon. For more information, visit the Monsterland website. They also have a presence on both Facebook and Twitter. 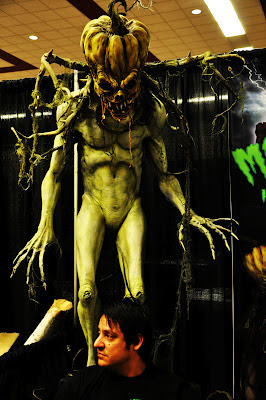 With the rest of the show out of the way, it's time to show you some of the many creators from around the show floor. Writers! Artists! This show had a bevvy of them, and some even had the time to indulge me and draw some sketches for my collection!

I finally had the chance to meet up with Joshua Hale Fialkov, writer of Last of the Greats and I, Vampire, both of which you should all be reading! Josh attended the show alongside artist Tony Fleecs, who had some great prints available, including a noir-styled take on Cyclops and Emma Frost that I just had to pick up. Visit Josh's website and Tony's Fleecs Design page, and do it now. 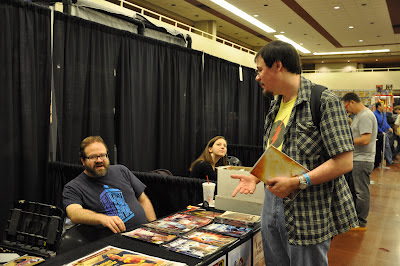 Next up--and the guy who was on the receiving end of my first demand request for a sketch was Los Angeles artist Gerimi Burleigh. Gerimi has written and drawn the original graphic novel Eyes of the Gods and is now hard at work on a new project, Morningstar, about Lucifer's fall recast as a western. If you like his work, visit his website here. 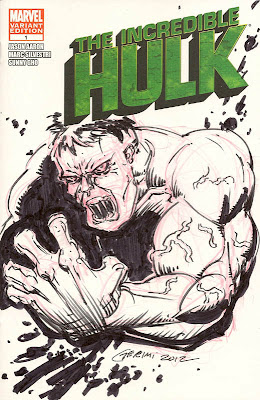 Across the way from Gerimi I discovered a kindred spirit in my historical knowledge of comics in J. Scooter Harris, a writer and artist who is the brains behind Studio Hadra. Scotter has a very distinctive style with heavy brush strokes, and had a number of original works--most touching on burlesque culture--with him. We discussed old Marvel and DC comics, we discussed Archie comics, we discussed "good girl" art--and I scored the below (rather terrific) Vampirella piece from him. Scooter's also the writer/artist behind Studio Hadra's True Crime Theater comic series, and his illustrations are often found in burlesque magazines everywhere. Pay him a visit, why don't you? 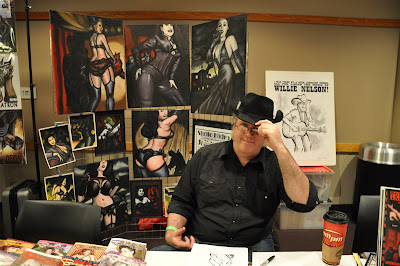 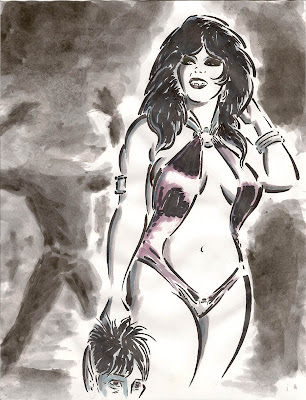 An aisle over from Gerimi and Scooter, I met up with Joel Gomez, who's currently background artist on Detective Comics. Joel is an affable gent, and he readily agreed to draw another in a series of unusual requests--Kirk Langstrom, the Man-Bat! Joel is everywhere online these days, having his own deviantART page, his own tumblr, and yes, he even tweets! 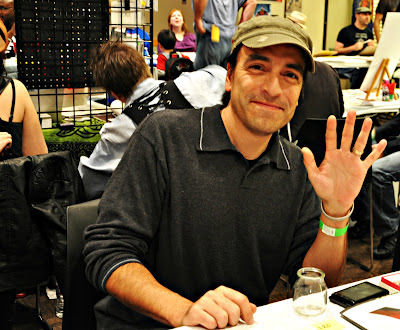 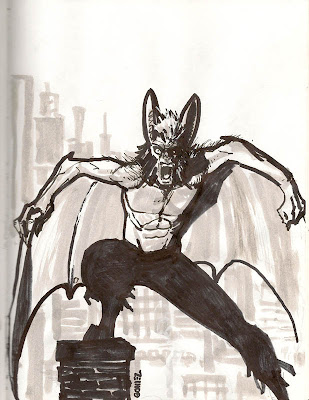 Artist Jon Hughes had some terrific examples of his work on display at the show. I remembered seeing his art the previous year. One of these days, I'm going to get a commissioned piece from him. In the meantime, you can marvel at his work below, plus find him at his website, JonHughesArt.com! 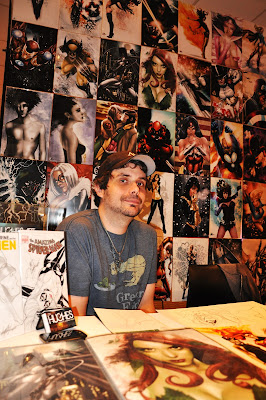 Image Comics alum and Hyperwerks co-founder Karl Altstaetter was also at the show. Karl is most notable for having created Deity, who fronted her own series of miniseries. Since Karl's always drawn some lovely ladies, I thought he'd be the perfect artist to draw the New Teen Titans' Starfire in her original costume. I don't know about you, but I wasn't disappointed with the final result in the least! Karl can be found online at both the Hyperwerks website and his own blog. 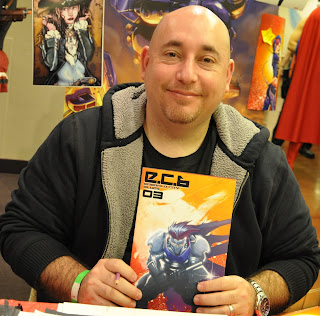 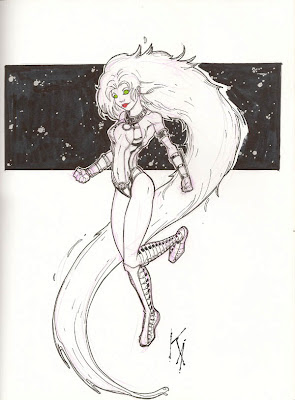 In the middle of it all, I somehow found time to meet up with local artist made good Tony Parker, who's killing it right now on Aspen's Dead Man's Run alongside this site's very good friend, writer Greg Pak. With the #0 issue out--but the first formal issue not quite there yet--it was a terrific time to talk with Tony. Right around the corner, the Aspen booth did have preview copies of the first issue with an exclusive cover, which I snagged and reviewed in an earlier blog post. Since the second issue is coming out next Wednesday, there's no better time to pick up the series and enjoy Tony's terrific work! 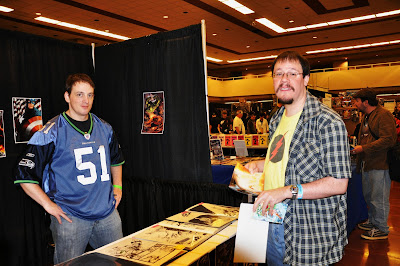 Keeping up with the theme of sketches involving the women of comics, I noticed local creator Alfred Trujillo had some interesting pieces lined up at his table. I couldn't resist giving him an Incredible Hulks #635 sketch cover and asking him to draw Red She-Hulk. How d'you think he did? Alfred has his own web presence at his site. 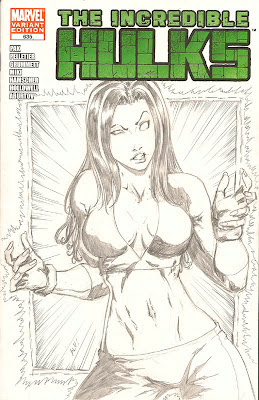 Last--but certainly far from least--is another local artist, Val Hochberg of Bad Karma Productions. She has a manga-influenced style that caught my eye, and since I was already on a roll with sketches of the Hulk family, I thought why not see what she can do with Lyra, the Savage She-Hulk? It's the best piece of the show, in my not-so-humble opinion! Visit Val at BadKarmaProductions.com. 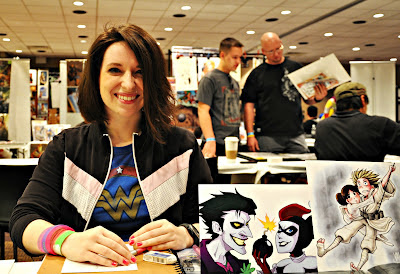 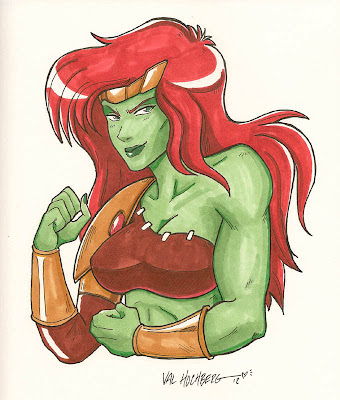 Last? Did I really say "last"? Au contraire, mes amis! Although that was the end of the sketches, there's no way I could end this blog entry on any photo other than this one, right here, right now, mutha#####s! It's the star of Twitter's #laymanvsscorpions hashtag--and, oh yeah, co-creator of Image Comics' Chew, it's...John Layman! (You can find him on Twitter, or on his blog.) 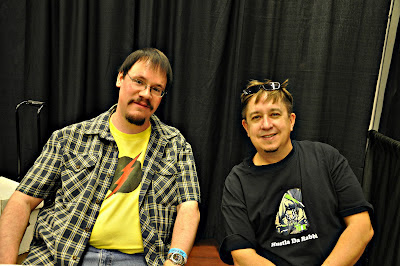 And, yeah, some schmuck in a Reverse Flash t-shirt. Who is that guy, anyway?
See everyone next year! Same Bat-time, same Bat-channel!
~G.
Quoth Gary M. Miller at 5:00 PM