The Hulk Is 50. Join Me In An Incredible Celebration!

No doubt by now you've seen the graphic on the last few issues of The Amazing Spider-Man. Large as life, with a stylish, instantly recognizable pose straight from the great John Romita Sr. Fifty years of Spider-Man. He's fifty! Just like the Fantastic Four was fifty last year! It's certainly shaping up to be a banner year for the amazing one, with the new Sony Pictures film helmed by Marc Webb, as well as Dan Slott and Stefano Caselli's "Ends of the Earth" event beginning this week. And yet, for all the celebrating, I can't help but feel somebody's getting left out. Is his green skin a sign of envy toward Marvel's resident wall-crawler? Or is skin color immaterial, and he's just getting...angry about it? 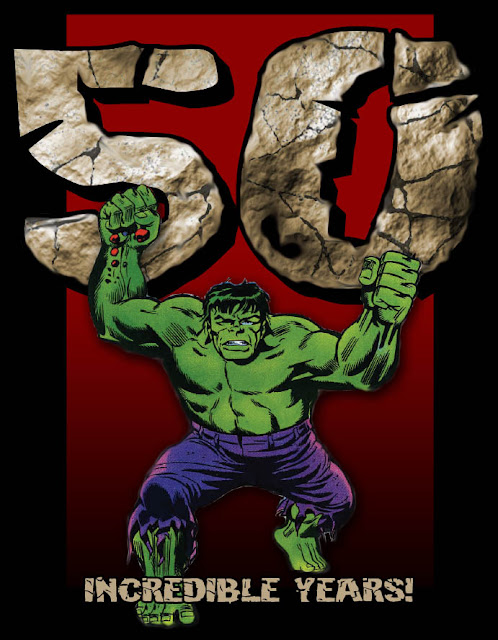 That's right, Hulk fans: 2012 marks the fiftieth anniversary of the creation of our favorite hero, too! "Is He Man or Monster or...Is He BOTH?" intoned Stan Lee on the cover copy of the first issue, cover-dated May of 1962. All these years later, such is the central theme for the character still. He's gone through countless incarnations, from the original, brutish gray incarnation who only stuck around for the first issue; to the green-skinned counterpart who gradually lost his intelligence, resulting in the version which non-comics fans know best; to the Merged Hulk who was a staple of comics in the nineties; to the savvy, planet-conquering gladiator who was the centerpiece of Marvel's 2007 event "World War Hulk"; and far, far beyond. Ol' Greenskin has entertained generations of comics fans, and after fifty years of doing just that, he's earned a celebration as grand as any super-hero in existence.

And yet, all we hear from Marvel is that the Avengers have their own feature film this year, and yes, that Hulk character's a part of it. We had a comic book series that was nearly to its 650th issue, but the company had to cancel relaunch it with a new first issue late last year. That series has been woefully inconsistent and, I feel, isn't truly capturing the power and majesty of the Hulk. Nobody's mentioning the Hulk as having been created fifty years ago, and nobody appears to be lining up special projects, variant covers, or anything of the like commemorating the event. Nobody's embracing the character's rich history.

This is the part where I come in and tell you to spread the word. Copy the above graphic I've designed. Bend it, shape it, any way you want it. You've got the power. Stick it on your website or blog. Put it in your Twitter or Facebook profile. And please, link back here if you can. Raise awareness that Bug-Eyes can't hog all Hulk's glory, because Hulk is the strongest one there is!

Even if Marvel doesn't do anything about the incredible one's golden anniversary, that doesn't mean someone won't. Like, y'know, me.

Many of you have been wondering why I haven't been around as much lately. Why haven't I been entertaining everyone with new articles for this blog a few times a week like I did pretty much all last year? Had the G-Man finally run out of things to talk about?

Quite the opposite, mes amis.

Yours truly has been writing. And writing. And writing some more--but not, as you'd imagine, for this blog. I've got a huge project in the works and I've been aching to share it with all of you. I've wanted to complete enough of it that I can't turn back, to be confident in my own abilities and what I'm writing, before officially announcing the project.

You guys (and gals) all know me as a veritable font of historical knowledge when it comes to the Hulk. I've been a fan for many, many years. I've read the comics and books, I've seen the movies and TV series, I've played the video games and bought the toys. I know people, and I know all kinds of stories. I know what might have been and what nearly was. And Lord knows, I have opinions about the last fifty years of stories. There are stories I love that very few others enjoy, and there are some highly-praised tales I don't give a damn about. Of course there are others I agree are real gems, and still others, real stinkers.

The most comprehensive guide to the world of the incredible Hulk hasn't been published yet...but you can bet that it's being written right now. Part history lesson, part literary criticism, it's going to knock you off your feet with all the force of a Gamma Bomb detonation. Whether you're a dyed-in-the-wool Hulk fan from way back, or someone who's only picked up on the importance of the character since you've been reading this very blog, this book is designed for you.

Need more reasons to pick up this book when it finally arrives? How about the original interviews I'm conducting for it? As of this writing, I've been talking to comics pros like Tom Brevoort, Steve Englehart, Glenn Greenberg, Paul Jenkins, Erik Larsen, Al Milgrom, Greg Pak, and Daniel Way--and that's just the beginning. (Yes, Twitter and Formspring count...and more creators are TBA!) Where possible, I'll be bringing you the behind-the-scenes stories, the might-have-beens--everything that was and wasn't.

Meanwhile, if you've got ideas you want to see in this book, reply here! Although I'm well past the halfway point in writing, and I've got plans to cover all the important bits of Hulk history, I figure there's always a chance I'll have missed something and you guys'll remind me. I'm just trying to head off that possibility.

Similarly, if you're a creator who hasn't yet been contacted, and wish to contribute, then reply here or send me a message at delusionalhonesty [at] gmail [dot] com.

More information as it becomes available, my friends. The current plan is to release the book on the Amazon Kindle, with a limited print edition. The book will be fully researched, fully sourced, and totally unauthorized in order to bring you, the Hulk's fans, a once-in-a-lifetime event.

Join me in wishing the Hulk a happy 50th.