Stay Angry: Or, How Marvel Must Want Me Behaving When Reading "Incredible Hulk"

(Warning: This review contains SPOILERS through this week's Incredible Hulk #8. Re-edited after 1st posting for clarifications.) 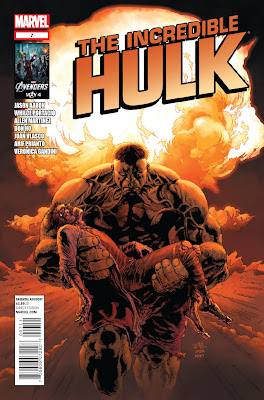 It's been a few months since I've really discussed Jason Aaron's Incredible Hulk. I've had a few reasons for that, not the least of which being my forthcoming book all about the Green Goliath, which will include some commentary on the last several months' worth of stories. That may be the biggest reason, but the fact is, when I'm not discussing the Hulk on this blog, ever since I started posting more regularly about two years ago, it probably means the book just plain sucks.

It happened once before, as Bruce Jones wrote the series into a ditch around the time of the 2003 Ang Lee film. There were some good bits among the bad, but really, the era of decompressed storytelling kicked in with a vengeance, and the Hulk appeared maybe a few times a year in his own series while Banner became an everyman to whom we somehow still couldn't relate, involved in an overly labyrinthine conspiracy story.

It's happening again today, courtesy Jason Aaron and a bevy of artists who can't seem to stay on the book for any length of time. Marc Silvestri managed three issues (more or less); Whilce Portacio managed four; and now we're on our second of what will be, minimum, six artists who aren't sticking around longer than a single issue. We're told that each issue has a different artist to give each story a flavor of its own, and that "Stay Angry" is a five-part storyline that is made of individual tales with an overarching theme. I'm convinced that the book is really so far behind schedule--or that Marvel is pushing an accelerated publishing schedule upon the series--that they have no choice but to use artists in swift rotation.

The ending of "Hulk Vs. Banner"--the four-part storyline that Portacio drew--was no surprise to readers of this blog or anybody who was really following the storyline for any length of time. Since there was a Gamma Bomb on Banner's island, and since Amanda Von Doom and her henchmen were not in the practice of leaving mad scientists alive, you knew Banner would bite the big one. You also knew that, since Dr. Doom cloned him to "separate" him from the Hulk in the first place, it wouldn't be permanent. Furthermore, Doom obviously had plans inside of plans, because that's just how devious a M.F. he is!

I told everyone about the storyline that would proceed forth from the end of "Hulk Vs. Banner," and that eventually--maybe in a month, maybe in a year, Banner would be alive again and be re-merged with the Hulk. I believed that because the Banner that Doom created was a clone, the Hulk was only avoiding changing back and forth to Banner because he believed Banner to no longer be inside him. A flick of Doom's fingers, and the puny scientist would return, with full awareness of what the Hulk did to a being he believed was him. Cue new, dramatic status quo about how these two really feel about one another, albeit without Raving Loon Banner™. 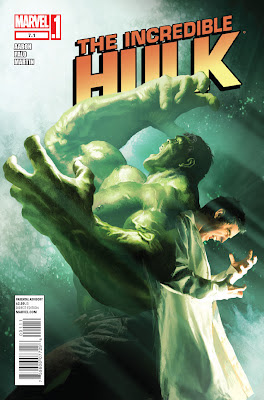 Incredible Hulk #7.1 shipped a few weeks ago, and initially, I thought I was right. Certainly the issue, still written by Aaron with artwork by Jefte Palo, seemed to go in the right direction, with the Hulk doing everything he wanted to do now that he was finally sans Banner, only to find out on the final page that--surprise, surprise!--Banner had never really gone anywhere. The story had some funky sexual overtones, with a scene between Hulk and Red She-Hulk right in the middle of a city (while the Orb, an old Ghost Rider villain that Aaron somehow perversely enjoys, looks on). And Aaron had to reveal that the Hulk was thinking about his creation Amanda Von Doom the entire time, natch. But hey! Banner's back, and the dynamic of the book's going to shift somewhere interesting, because this isn't evil Banner, right?

Wrong. In "Stay Angry" Aaron reveals that the Gamma Bomb inexplicably fused Raving Loon Banner™ back together with the Hulk, which appears to have been Doom's dastardly evil plan all along. Further, the Hulk no longer has any memory of what happens when Banner is in control. And to top it all off, Banner appears to be going around from unusual situation to unusual situation, doing mad scientist-y things that leave the Hulk questioning just what the hell he's up to whenever he changes. Suffice to say, Banner might even be planning just where and when he changes, in order to keep the Hulk stymied.

The one good thing that Aaron appears to be doing is re-establishing anger as the trigger for the Banner-to-Hulk metamorphosis; or, at the very least, anger keeps the Hulk from transforming. His idea is a little like the Neveldine/Taylor Crank series of movies, in that to stay in control, the Hulk needs to stay angry. But inevitably he must be subdued, either by gas, or something else, and then Banner re-emerges. We never see Banner, but know that he must be up to no good, because we see his handiwork--a detached doggy-finger--and next thing we know, the Hulk awakens in a strange locale with a stitched-up hole in his chest.

Aaron's story gives echoes of Peter David's earliest stories, wherein Banner and the Gray Hulk jockeyed for control. Unfortunately, the similarities end there: According to both the series' recap pages and some in-story dialogue, it's made clear that this is "insane" Banner from the first seven stories. Gone is the sympathetic, even heroic Banner from as recently as last year, and Lord only knows if he'll return anytime soon. Even the Hulk--at least a little sympathetic in the first two arcs to counterbalance Banner--is brutal and ruthless in this story, teaming up with the Punisher--another of Aaron's pet projects--to track down some dog-faced drug-runners. He drags one of them from the back of a truck for several miles. I'd expect this out of the Punisher, but the Hulk? 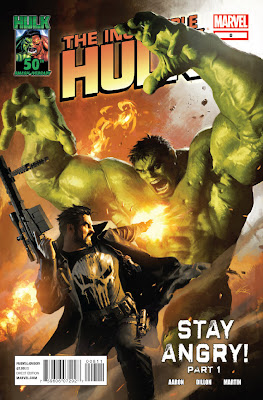 There's a way of making Banner seem like the "bad guy" in the Hulk's eyes without actually doing it, but Aaron's stories have all the subtlety of a sledgehammer. Put this bluntness together with these personalities, and you have two unappealing main characters without any vaguely heroic traits, only selfish ones. Without any relatability for Banner or the Hulk, the series loses the same qualities as recent movie efforts lost without a Bill Bixby-esque actor in the lead. (More on the need for a heroic protagonist in that book o' essays, promise!)

The artwork in this storyline isn't any better. Steve Dillon may be a great artist on gritty crime dramas like Punisher or Preacher, but big green monsters aren't his forte and this issue proves it in spades. Say what you will about Marc, Whilce, and Jefte, but at least they knew how to show the Hulk to scale. Dillon's Hulk is a lean character that owes more to Lou Ferrigno than to any Hulk artist of the last few decades. And hey, with a healing factor that can recover from virtually any wound, why is the Hulk still bald after three whole issues?

Aaron's abhorrent treatment of Banner to create a new and edgy dynamic for this series is a big reason why the book has lost virtually all its charm in my eyes, and the rotating string of extremely mediocre or ill-fitting artists just makes this book tumble further on down the list. Now that I see what Aaron's game is in "Stay Angry" and what it likely means for the remainder of his run, it can't be over soon enough. About the only way I could imagine this series improving would be if the Hulk, impossible as it currently sounds, decides there's something wrong with Banner, and wants to genuinely help him because he was never like this before and Doom made him this way.

Who knows? Maybe Doom will point the Hulk in the direction of the Marvel offices. And maybe this infernal storyline will be over, so I won't have to "Stay Angry."