It's been a few months since I've been around these parts. For those of you with Twitter, you know I've still been as active in my fandom as ever; I just haven't been able to blog on account of a whole host of realtime issues. The Hulk book is still forthcoming, I promise. In fact, with this very blog post, I really have to watch what I say about at least one series I want to review because its release has totally thrown a spanner into the works of the final essay I've left to write.

Am I making sense?

So. Let's get on with it, shall we? What have I been reading during the last couple of months? 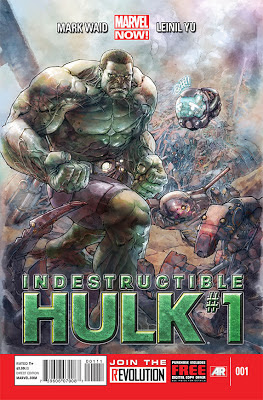 INDESTRUCTIBLE HULK #1 (Marvel, $3.99) - It's true that Marvel seems to be caught in a cycle of perpetually relaunching some of their characters, and the Hulk is one of their biggest targets. It started with "Planet Hulk" in 2006 and continued through the Red Hulk launch in 2008, the re-renumbering of Incredible Hulk in 2009, the introduction of the Hulk family in the transformed Incredible Hulks series in 2010, and finally last year's rebranding courtesy Jason Aaron. As part of the "Marvel NOW!" initiative, our favorite Jolly Green Giant has once again had his series restarted, written by Eisner and Harvey Award-winning writer Mark Waid, no less!

Let's get this out of the way right now: I love Mark Waid. He's written several of my favorite comics storylines, including "The Return of Barry Allen" early in his Flash run; "Chain Lightning" and the "Dark Flash" stories late in same; "Unthinkable" and "Hereafter" in Fantastic Four; "Man and Superman" in JLA; too many Captain America stories to count; "Urban Jungle" in Ka-Zar; and, well, you get the idea. In my top ten comics writers of all time, easily. Have I mentioned yet what miracles he's worked in making me enjoy the perennially-dark Daredevil by embracing a lighter mood? No? Corrected!

So far--and I realize we're only one issue into his and Leinil Yu's run--I remain optimistic, but can't help but feel we've moved a dozen steps backward. While it's an inspired choice to have Bruce Banner accept that he and the Hulk aren't going to be rid of each other anytime soon, and while there's a germ of an interesting idea having him set up shop with the same spy organization that once was complicit in exiling him into space, there's honestly precious little here we haven't seen done better elsewhere. We saw Banner using his incredible intellect on a regular basis during the final two years of Greg Pak's run, and Lord knows how many times we've seen him bring the Hulk's strength to a big think-tank organization. (The Pantheon, anyone?)

Then there's ol' Greenskin himself. Last month, Jason Aaron gave us a fully articulate behemoth who briefly swapped places with Banner due to the old stimulus of anger before giving way to a more well-balanced behemoth. Now, Waid seems to be fully embracing anger as a trigger, which no one's really done with any regularity since 1982. Not only that, but this first story only gave us a mute misanthrope rather than the "nobody's fool" incarnation of recent memory. If Kelly Sue DeConnick's Avengers Assemble and Jonathan Hickman's Avengers are any indication, it's very likely we're seeing the full-fledged return of the savage, child-like Hulk to the Marvel Universe.

And I'd be perfectly fine with that, if not for the fact that blessed few writers actually have a knack for the character since his exeunt from virtually the entire Marvel line in 1982. Being a fan of the "classic" Marvel tropes, I'd think Waid would fit among that number, but he's stated in an interview that he's "still having a hard time pinning down an exact 'voice' for Hulk," which doesn't exactly inspire confidence seeing how he's likely more than a few issues along in his scripting efforts. And when one of Marvel's best writers has a tough time with a character's voice, well, gulp!

Waid does have plenty of time to prove me wrong. With the so-far mute Hulk, though, I'm reminded of another relatively recent writer's run--that of Bruce Jones. Spy stuff? Check. Mute Hulk? Check. Boring as hell and wildly inconsistent with what came before? Check and mate. I'm hoping that, unlike Jones, Waid remembers, as Pak and David and even Jason Aaron did, that the Hulk has his own needs and desires. Even in his childlike incarnation--the one Marvel seems intent to foist upon the reading public as result of his scene-stealing appearance in the Avengers film--he has been underestimated in terms of cunning and yes, intellect. And those are aspects that have been lost in the shuffle, atrophied from years of disuse.

Buy it. Read it. Just don't expect to be blown out of the water quite yet. 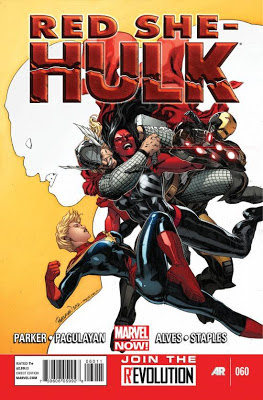 On the other hand, there's Jeff Parker, Carlo Pagulayan, and Wellinton Alves's RED SHE-HULK #60 (Marvel, $2.99). Three months in, I'm enraptured by the narrative they're constructing in which Betty Ross has been desperately trying to avert a future that seems to already be happening. Parker has smartly begun reintroducing elements of Jonathan Hickman and Dustin Weaver's landmark SHIELD series, which is interesting because of Waid's tying the original Hulk to the modern version of same. It's also nice to see Parker keeping Machine Man in the mix, since he was in the Red Hulk's series ever since the "Hulk of Arabia" arc some months ago. Pagulayan and Alves's styles mesh well enough, and I'm hoping they're able to keep the series consistent for a while yet, as having two artists working concurrently on each issue beats trading off artists between arcs.

That conclusion to issue #60 does raise some interesting questions. Without spoiling anything, hey, it's not like we didn't see the same thing happen to Jen Walters before (in the late Steve Gerber's opus, "The Cosmic Squish Principle"). I'm just curious as to why it's happened, and what it means for Betty in the immediate future. If you haven't tried this book yet, please, please, please do. 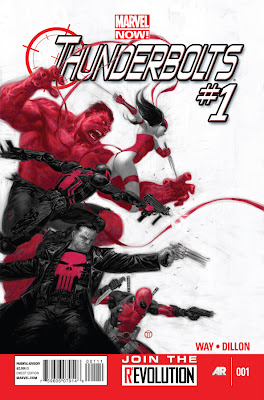 It's been a while since I predicted this series' status quo change, but it's better late than never. THUNDERBOLTS #1 (Marvel, $2.99) gives General Thad "Thunderbolt" Ross a chance to share the spotlight with a team of Marvel's nastiest assassins and killers that's, perhaps ironically, named after himself. The seeds for this group, if the cover's any judge, were planted during Jeph Loeb and Ian Churchill's "Code Red" storyline in Hulk, with some of the extra stuff courtesy the recent "Circle of Four" arc. Writer Daniel Way sets up the story interestingly enough, framing the "pilot" as a conversation between Ross and the Punisher while intermittently flashing back to the incidents wherein he "drafted" the other team members. True, Ross no longer seems to be in hiding like he was in Jeff Parker's series, but it's too early to tell whether that's a good or bad thing. (I like having the Red Hulks' identities be secret to the world at large, as a counterpoint to the green Hulks.)

By far the most surprising thing about this first issue is the identity of the member that isn't on the cover. She's a Hulk foe from way back, and could be just the wild card the new Thunderbolts need. Kudos to Daniel Way. (Just please, please, please don't use the origin Peter David gave her.)

I've said it before, and I'll say it again: The weak link in this series is the horrendously average artwork of Steve Dillon. He works well on a "street-level" series like Punisher; not so much with a book filled with super-powered characters, one of whom is built like a brick outhouse. The book just doesn't have the visual "pop" it should, and a more dynamic artist would be tremendously appreciated, the sooner the better.

Still, this is a quality read and I'm anxious to see this group get together and kick some ass. 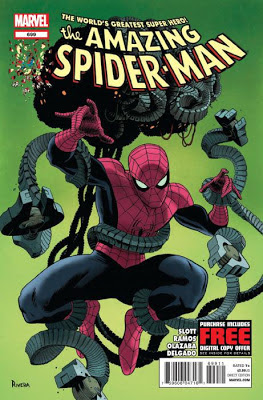 Alas, I've saved the best for last. THE AMAZING SPIDER-MAN #699 (Marvel, $3.99) has surpassed my every expectation. The final arc, "Dying Wish," has everything that I want out of a Spider-Man story: Life-and-death stakes, challenges that cut to the core of Peter Parker's character, insidious villainy, stupendous suspense, and that trademark humor. If you missed the last issue, please run, don't walk, to your local retailer. You can even catch it digitally on ComiXology if you like. If you miss this story, you're missing great comics.

Writer Dan Slott has been seeding this storyline since The Amazing Spider-Man #600 back in 2009. Doctor Octopus has been dying, his all-too-human body slowly breaking down because he's taken too much punishment at the hands of super-powered individuals. His schemes have steadily escalated, until now where he's finally in possession of a super-powered body that will help him show the world who's boss. Unfortunately, that body is our hero's! That's right, Otto Octavius has transferred his consciousness into Peter Parker's body, which means our hero's mind is in a body that is failing him by the hour. Not only that, but Peter-as-Ock's trapped in an underwater prison under armed guard! It can't end this way...can it?

Slott and artist Humberto Ramos bring their "A"-game to this Spider-saga, due to end in The Amazing Spider-Man #700 in just a few weeks' time. The whys and wherefores behind Ock's scheme become crystal clear in this story. Not only that, but the ending and the cliffhanger bring to mind the sagas of yesteryear that we just don't see in comics anymore. You know the kind I'm talking about, because I've written about them before. There's a feeling of momentum building toward the conclusion, rather than something new beginning like in just about every other anniversary issue Marvel and DC put out these days. Let's make no mistake: I want that book, and I want it now. Kudos to Dan Slott and the Spidey team supreme for making me feel that way.

That's enough from me tonight. What d'you think, sirs?