Convergence (Or, an Essay on My Changing Comic Buying Habits)

...and no, this time I don't mean DC's Convergence event that ran through their June and July-dated books this year. But, then again, that's not a bad place to begin...

Historically speaking, my comic book buying habits have been rather crazy. And when I began ordering from Discount Comic Book Service in 2006 was when that habit kicked up another few notches. With astonishing 40% discounts across the Big Two and sizable discounts for the other companies, I could afford more than under my local comics retailer's discount.


(Please let's don't accuse me of being anti-local business. Time is money, and one of the closest comic shops to my prior home in western Pennsylvania was an 80-mile round-trip jaunt. Where I live today, it's still 40 miles, round-trip, to a decent store. Can you honestly blame me for embracing mail-order at such discounts?)

Month in and out, I buy predominantly monthly issues, but I also add some trade paperbacks and hardcovers. Sometimes I really go out on a limb and buy mini-busts, statues, and T-shirts of interest to me in Diamond's Previews catalog. (Diamond is another discussion entirely. But, I digress.)

Here's the last two years' worth of DCBS orders from me (sorted by month in which the orders were placed, generally 2 months before release). You'll note some interesting patterns, no doubt: 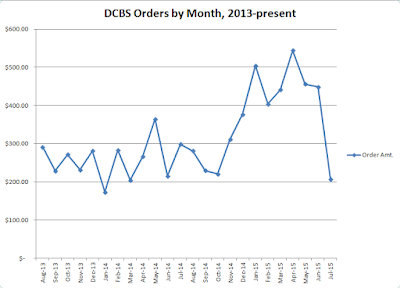 You'll note that most of the time, my DCBS bill--inclusive of all monthly titles, trades/hardcovers, and other items--was staying comfortably around $275 up through the end of last year, with only one outlier (a month that included a Marvel Masterworks volume, a Marvel Omnibus and a deluxe Mego-style action figure set).

And then, from November onward, the upward trend was unlike anything in the entire 9-year history of my association with DCBS. Look at those spikes for January (with a $250 Secret Wars Battleworld slipcase set) and April (with a Marvel Masterworks, two Marvel Omnibus and the first month of Marvel's Secret Wars event).

Know what the really interesting part of my DCBS orders is, starting with April? There's only one--count it, one--regular DC series in each of those orders.

Y'see, DC decided (or was forced by parent company Warner Bros.) to move offices from New York to Los Angeles in order to be closer to their movie studio arm (so they could better inform the new spate of comics-based films, natch). And during the two-month gap when they were moving offices and getting their new editorial crew settled in, they staged an event called "Convergence," consisting of one nine-issue miniseries and 40 two-issue satellite miniseries. The largest miniseries, actually called Convergence, told the main story while the satellite series delved into a number of previous and alternate timelines.

As a fan of alternate timelines, I was intensely fascinated by "Convergence" as an event, enough to pre-order the entire range of series in twin bundles, one per month, at half off cover price. The four main eras in which the stories were told were DC's Golden Age of the 40s and 50s; the pre-Crisis on Infinite Earths era of the 70s and 80s; the pre-Zero Hour era of the mid-90s; and the most-recently-abandoned pre-Flashpoint era of the late 2000s. I was particularly interested in the last of the eras, since I'd recently taken a new interest in the post-Crisis Superman. (To wit, I bought virtually every Superman comic between 1986 and 2011 I'd been missing in order to do one massive read-through. The results of said read-through will be in a future DH entry.)

"Convergence" had its ups and downs, with the main miniseries being perhaps the least interesting thing about it. After a number of false starts and restarts, it seemed that all of the various "mainstream" DC timelines "counted" in some form or another, finally, again. The miniseries had some good and maybe even great moments, with Dan Jurgens giving a terrific coda to "my" Superman and Gail Simone giving Dick Grayson and Babs Gordon a happy ending, to name but a few.

However, nothing on the other side of the event has looked all that interesting to me. Even an event like Superman's secret identity being spoiled to the world by Lois Lane--which would have been a must-read years earlier--didn't faze me. Nor did Jim Gordon donning a suit of high-tech armor to become a new Batman. And so, the only DC book I chose to pre-order in April and beyond was Batman '66, the stunning digital-first series telling adventures in the style of the Adam West & Burt Ward-starring TV show of the swingin' sixties.

My lack of enthusiasm in DC's monthly series doesn't mean I won't rule out ordering some trade paperbacks of the new stuff soon. I'm just that much less likely to pick up single issues today.

So now, Marvel's careening into an eerily-similar event--Secret Wars, with several alternate realities all smooshed together by Dr. Doom in the world's biggest Fantastic Four story masquerading for the last several years as an Avengers story. (Thanks, Jonathan Hickman!) While DC chose to do an inversion of their 1985 opus, Crisis on Infinite Earths, they'd at least given it a different name; Marvel's event not only has the same antagonist and many of the same plot beats, it's given pretty much the same name as the event being "homaged."

The question remains...when the new round of solicitations for Marvel's post-Secret Wars slate comes up, how many of their series will I pick up, and which will I leave on the shelf (or rather, with a big fat "0" on DCBS's Excel order spreadsheet)? On the month before the very end of Secret Wars I'm not just at the normal, pre-2015 level of buying, I'm actually approaching some of the lowest levels I've ever ordered. And if anything, Marvel's relaunching their entire line from #1 issues makes it easier to quit than DC...

So, it's a question so similar to doing the Limbo: "How low can you go?" How many Marvel series will be left on my orders from August forward? Will I be dropping nearly the whole line like I did with DC, only following them in trades now and then? Is 2015 the year of the sudden erosion of my enthusiasm in the comic book as an art form? Or might I finally embrace the indie books out there over what the Big Two offer?

So, who's got some other thoughts on Convergence, Secret Wars and the other major events of 2015? Lines are open for your calls...