Once upon a time, I wrote about 3/4 of a book. I worked on it in the months leading up to the Hulk's 50th anniversary year (2012), hoping that maybe I could find a publisher and put myself out there. Sadly, I made a few tiny tactical errors when I was writing/researching it, such that it's probably not publishable outside this blog. (With hundreds of pages written, I could probably string it out for the better part of a year here, on a daily basis.)

The book was my testament to the Hulk character and his enduring legacy. I found out all manner of might-have-been's and theorized on various concepts surrounding the Hulk, Banner, and his world. Some of the more thoughtful ideas could be better kept to myself and used if ever I was in a position to work for Marvel as the series' writer.

Each of the chapters of the book was really an essay about a different topic related to the Hulk, and each chapter and subheading had a title from one of the previous five decades of his stories. One such essay, planned to be near the back of the book, was titled "But Who Will Judge the Hulk?" (after The Incredible Hulk #152) and ostensibly concerned "...the Hulk's Rampages, Loss of Life & 'Doing the Math.'"

As you can imagine, the chapter primarily dealt with the question of whether the Hulk, and by extension Bruce Banner, was a killer by any stretch of the imagination.

And, of course, the unequivocal opinion of Civil War II writer Brian Michael Bendis is and has always been that the Hulk is a killer of innocents. Wherever he goes, slaughter inevitably follows. After all, in New Avengers: Illuminati, he has S.H.I.E.L.D. agent Maria Hill on record as stating that during one of his recent rampages, the Hulk killed 26 people. And a puppy.

And in Civil War II, we see it all over again.

And it's wrong, and it's twisted, and it hits all the wrong character beats, and it shows a fundamental misunderstanding of both Bruce Banner and the Hulk.

But at the very least, I understand why.

The article I wrote--and I won't regurgitate it all here, because it's nearly 13,000 words total--goes through the basic arguments I've seen for the Hulk actually having killed innocent people. I introduce the theory that Greg Pak put forth via his character Amadeus Cho in Incredible Hulk (vol. 3) #110 whereby he states that the Hulk "runs the numbers" during his battles, subconsciously making calculations so that no lives are lost. And then I put that theory to work across the Hulk's entire canonical history, finding more often than not that it bears out. There's only one truly questionable incident in all that time. With all of that in mind, I refuted the "Hulk-as-killer" logic and effectively threw out Mr. Brian "I had the Hulk kill 26 people...and a puppy!" Bendis' idea.

But now we're right back there again, with an Inhuman psychic or somesuch stating that Banner's going to become the Hulk again and kill all the heroes. And when the two sides of the current conflict go to confront Banner, the narrative is framed flatly against him. The fact all of them even go together reeks of precipitating the very event forecast in the previous issue, which is cliché in the extreme. But then, with Banner carrying out new gamma experiments on himself, he's painted as unsympathetic. (Bendis hints that the experiments are what's keeping him from hulking out, which goes against what Pak revealed in Totally Awesome Hulk; hence, Banner sounds like a liar.) And although the last few writers of the Hulk's regular series--Jason Aaron excepted--took exceptional pains to show Banner as a strong-willed man who had acknowledged his more atavistic side, this story relied on the same old, tired, one-note characterization of his being deathly afraid of what the Hulk might do if he should lose control. So when you reduce Banner to a archetypal mad scientist and the Hulk to the archetypal monster he made, what else can be done?

Hawkeye lets an arrow fly and gets him in the head. At the trial--conveniently covered in the same issue--he recollects how Banner told him to kill him, and gave him the means of doing so, long before the incident took place. And there's also a videotape where Banner confesses to the whole thing.

If I wasn't already upset, I'd be outright disgusted by this turn of events. In plainest terms, Banner just employed Hawkeye as an accessory to his own suicide.

Let's get this straight: the idea of Banner pulling the trigger himself caused editor Tom Brevoort to balk (as referred a few entries ago), but Banner pulling a Jack Kevorkian is all right? Superhero euthanasia is okay with Marvel and the Mouse House? Really?

Shame on you, Marvel. What you've done is no better.

(Yes, Hawkeye is also mischaracterized throughout the story, but that's not the issue.)

What's behind the entire argument--from the the folks like Bendis who ask, in effect, "How could the Hulk not be responsible for the slaughter of innocents?" to the folks who seem just a bit too eager to fight "Cho's Theorem of Selective Smashing" as put forth by Pak, and all points in between--really boils down to a gross mis-application of an adult point-of-view. I mean, we're all looking at a fictional character created in the 1960s by creators looking to appeal to that generation's children and teens. Would Stan Lee and Jack Kirby have intended for fans to have moral arguments over the extent of the collateral damage caused during the Hulk's rampages? I'm quite sure the point never crossed their minds. Granted, they may not have fully understood how rich and deep the concept of the Hulk could become.

But to apply grown-up logic to a character meant to entertain the young, I think, breezes right past the power fantasy aspects of the character and goes somewhere needlessly dark. There's a point in there about power and responsibility that Spider-Man does far better, but that's outdone by other, more potent metaphors about the price of hubris, the necessity of reining in one's anger, and the channeling of that anger toward more positive purpose, to name but a few. Somewhere in the miasma of the 1980s realism boom--the one spearheaded by projects like Alan Moore's Watchmen and Frank Miller's The Dark Knight Returns and the one being currently, ostensibly refuted in DC Rebirth--the qualities that endeared fans to the Hulk were obscured, until today we have some creators like Civil War II's Bendis with a myopic view that overlooks much of the nuance in favor of cheap thrills and headline grabs.

Speaking of headline grabs, there's the newly-released description of Civil War II: The Fallen #1, a one-shot depicting Banner's funeral (as theorized, written by Greg Pak): "a group of protestors gather outside, determined to make sure the many deaths the Hulk caused in his lifetime are not forgotten." (Emphasis mine.) With Pak as writer--one of the few to really understand the Hulk in the modern era, and the chief theorizer behind Cho's Theorem--one hopes that the deaths referred to in this copy are mere hyperbole. (Since the text is from a third-party site and not directly from Marvel, I'm leaning toward yes.) 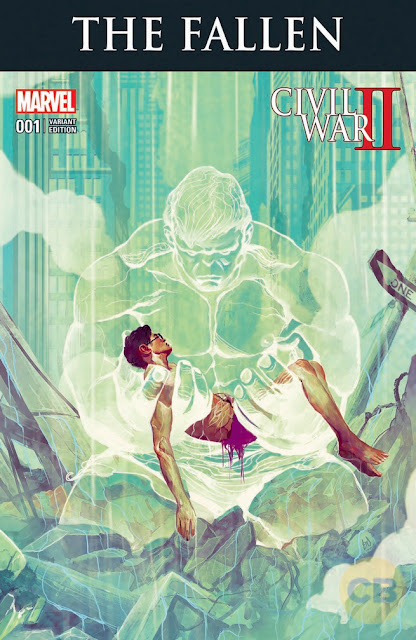 I'm not saying that Bendis is the sole culprint; with projects like Mark Millar's The Ultimates, Brian Azzarello's Banner! and others, there's enough blame to go around when it comes to this cold reality. Each has shown Banner as a weak-willed man, barely able to contain his own emotions, and the Hulk as the rampaging, physically potent, often murderous id. Even the "holy trinity" of Hulk writers--Bill Mantlo, Peter David & Greg Pak--have imbued Banner and Hulk with darker traits as they have evolved the character(s). Mantlo started the psychological exploration of Bruce Banner in the mid-80s in ways that writers like Roger Stern (in "The Monster's Analyst") didn't dare, establishing that young Bruce was abused by his father. David gave Banner the official diagnosis of dissociative identity disorder (DID, formerly multiple personality disorder) and, in a few story points that muddy the waters of the Hulk's capacity for killing, showed that Banner accidentally killed his father, then repressed the memory. Later still, David had Banner nearly be responsible for a school tragedy on par with Columbine, but for a mathematical error. Pak's only sin, if you can call it that, is that he used Mantlo and David's updates to enhance his own tales. Still, what Mantlo and David did hardly enhances Banner, and in fact serves to make him only less sympathetic. (Pak actually made him remarkably sympathetic in spite of dredging up the worse aspects of his past.)

What Bendis, Aaron, Millar and other modern Hulk writers have missed is something even simpler. In pandering to the boom of applying adult sensibilities to characters created for a younger audience in a bygone era, they have succumbed to the selfsame logical fault as "Thunderbolt" Ross, Glenn Talbot and all the Hulk's other fictional antagonists who would otherwise appear to be on the side of good. They all succumb to the cognitive dissonance inherent in the early years of the character.

Follow: if you just looked at the Hulk--a seven-foot, 1,000-pound creature stomping around--you'd think that he's just a brutish monster, and you might be afraid of him, and maybe even think he deserves to be destroyed. You'd be making a judgment based on his appearance, his size, and your own feeling of powerlessness in front of such a creature.

And Banner? A scrawny scientist becomes a terrifying monster? Yeah, you're probably going to think that he's just an emotional wreck, and quite gutless for not doing what he should have done long ago: take himself out of this world because of whatever his monster is responsible for.

But then, examine the character behind the horrific appearance: a noble scientist inside, albeit regressed to something resembling a child in his most popular incarnation. He wants only for a place to belong, and for those who wish him destroyed to just leave him in peace. He longs to be understood, to enjoy the company of his friends, of which there are very few, and also wishes for love as do we all. And when he doesn't get what he wants--when others threaten him--when he is misunderstood--he smashes. 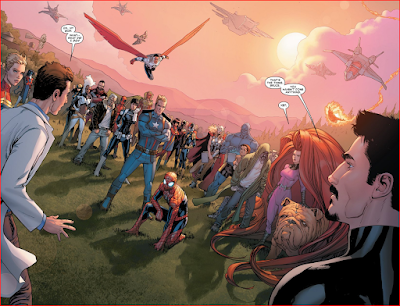 The cognitive dissonance in the Hulk is clearly the most difficult concept for today's writers to grasp(and which I give Greg Pak a gold star for even approaching): he may look like a monster, he may be treated as a monster by the public in the comics, but, well, in the words of Amadeus Cho from Incredible Hulk #100: "He's a hero. He may hate us puny humans, but he saves us anyway."

You can bet both Bruce Banner and the Hulk will return eventually. But will they return under the pen of someone who sees the dissonance, or is blinded by it? Will he be written by an Amadeus Cho who understands him, or still another "Thunderbolt" Ross that doesn't dig any deeper?